Against the Grain: Marion Milling brings stone-ground sustainability to the West Bottoms 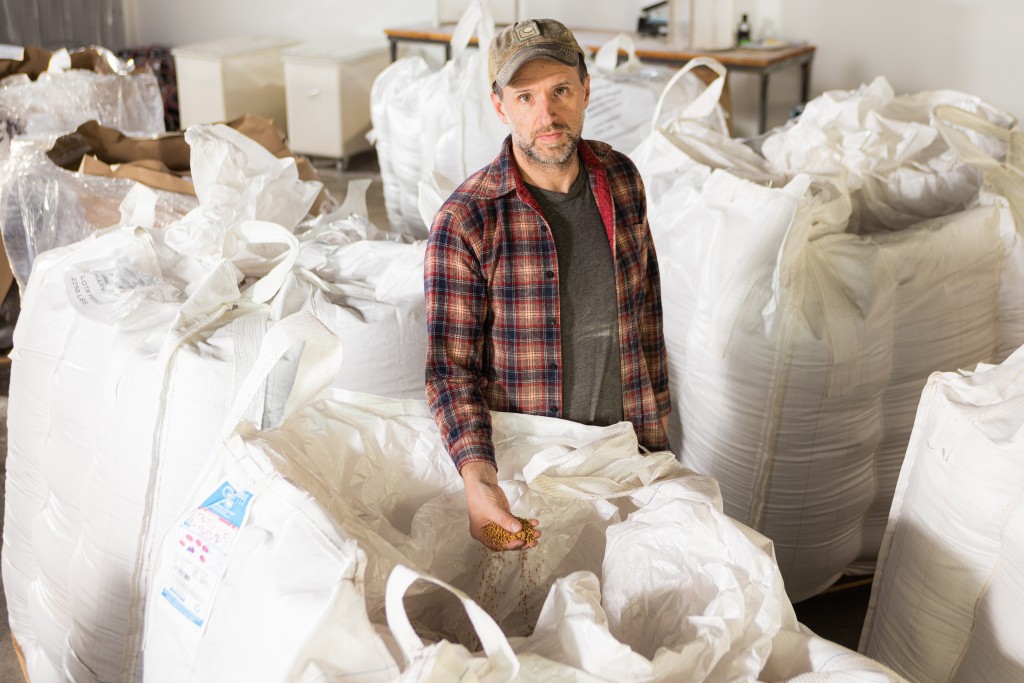 Will Berndt is not a salesman.

The founder of Marion Milling, a small flour mill that opened in the West Bottoms last year, is a baker by trade and by temperament. He’s soft-spoken—maybe a little taciturn. Before he got into milling, he spent almost a decade baking bread at Fervere and Ibis Bakery. He’s used to working in the still, solitary hours when most of the world is asleep.

Now, he’s ready for the rest of the world to wake up. He’s got a vision to sell, even if the selling gives him hives. He wants to build a local grain economy.

When I meet Berndt at the mill—a cool and cavernous space on the third floor of a historic building—he’s dressed in monastic monochrome: gray pants, gray shirt, gray trucker hat, all coated in a fine white dusting of flour as though he’s trying to blend in with his granite mills.

All of Marion Milling’s flours are ground on two 40-inch granite grist mills. They’re made by Andrew Heyn of New American Stone Mills, a small Vermont company that Berndt credits with the resurgence of traditional stone milling across the country.

If Berndt were a salesman, his pitch might sound a little like this: There aren’t many flour mills that use traditional stone milling techniques these days. Even fewer have Marion Milling’s focus on local wheat and regenerative agriculture. Berndt pays small farmers more than five times what they’d make per pound on the commodities market to grow heirloom wheat varieties—bred for flavor, not just for yield—and to grow them with organic practices. And his focus on smaller regional farms in Missouri, Kansas, and eastern Oklahoma means Marion Milling’s flour has a smaller ecological footprint. Sustainability is a guiding principle. Even the bran sifted out of Marion Milling’s flour gets used (currently, as feed for heritage pigs at Odd Bird Farm near Weston, MO).

To be clear, Berndt, who lumps himself in with the “wheat nerds,” cares about all of this very deeply. It’s why he started the mill with business partner (and Ibis Bakery founder) Chris Matsch. But he gets the most animated—the most salesman-like—when he talks about flavor.

“There’s a huge difference when you have a fresh stone-milled flour, lightly sifted, high extraction. It just smells different. When you feed your starter with it, it’s more active.” 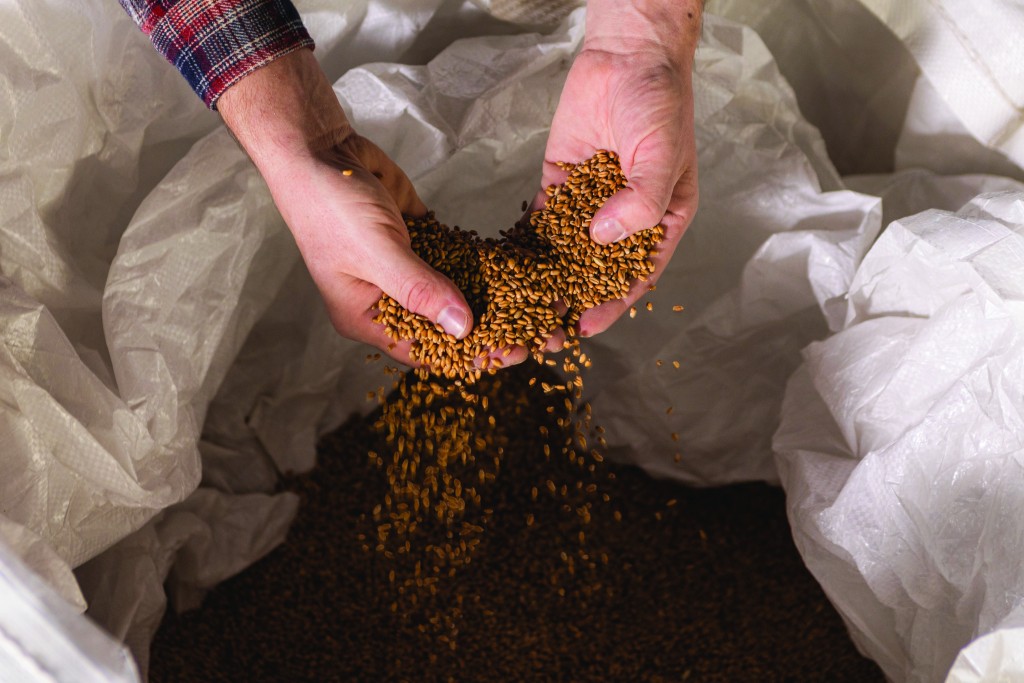 He dips a hand into a grain tote the width of a VW beetle and sifts a few kernels of unmilled wheat through his fingers—a variety called Warthog Red. “This is grown in Sweet Springs, MO, by a guy named Greg.” (The Greg in question is Greg Guier, of 180 Farms.) It’s the wheat he uses for Marion Milling’s all-purpose flour.

In some ways, Kansas City seems rife for a “single-origin wheat” renaissance. If Kansas is the Wheat State, Kansas City might as well be the Wheat Belt’s buckle. In the late 19th and early 20th centuries, Kansas City had dozens of flour mills. In a 1938 article in The Kansas City Star, grain magnate Frank A. Theis (namesake of Theis Park) stated, “No other industry, directly or indirectly, has been more closely identified with the growth of Kansas City.”

Few of those mills remain today. The ones that do process cheap commodity wheat on high-capacity “roller mills,” which use large, steel cylinders to remove as much bran from the flour as possible. (Stone milling, by contrast, grinds more of the whole wheat berry into the flour, making it both more nutritious and, well, wheatier tasting.)

If you pick up a bag of all-purpose flour at the grocery store—Pillsbury, Gold Medal, King Arthur—you’re probably getting something that was processed on a roller mill. Those flours have some advantages. Namely, they’re cheap and consistent. But Berndt is hoping bakers are starting to care more about both flavor and nutrition.

“It’s not something people really think about much, flour being a living thing that someone grows. You don’t think about it like a tomato or something. But it’s similar. I think there’s more people interested in finding out where their grains are coming from.”

To help spread the word, Berndt hired the mill’s first employee in May: Jon Szajnuk, Director of Sales and Development.

Szajnuk is a salesman. He’s charismatic and genuine, the kind of guy who can talk to strangers with ease. He’s also a fellow wheat nerd who runs a cottage bread business called Jonny Bakes out of his home in Brookside.

Every Saturday, Szajnuk sells Marion Milling’s flour—and the bread he makes with it—to eager customers at the Brookside Farmer’s Market. But even if Szajnuk wasn’t on the payroll, he’d probably still be talking up the mill to anyone who stopped by his stall. Szajnuk had been using Marion Milling’s flour for his breads for more than a year before joining the company. Telling the mill’s story comes naturally.

“It really is a return to the historic economics of this area and it really does benefit a wide group of people just by having the infrastructure here,” he says. “You can ensure that the flour you buy is helping to support your neighborhood farmer and miller and just completing that local grain economy. The money is staying as close to home as possible.”

One of his first duties? Helping get the mill set up for retail sales. Until this spring, the mill had primarily been selling wholesale to restaurants and bakeries—Town Company, Zero Zero Pasta, Fox and Bull. Now, home bakers can buy 3-pound bags of it, too. Coverage is still limited, but the mill is adding retail partners each week. Big Mood Natural Wines keeps a few bags on hand, as do the Made In Kansas City shops. A few partnering farms sell flour at their farmer’s market stalls or include bags in their CSA shares. And the mill recently opened up an online store for direct-to-consumer sales.

They’re going to need to keep growing to build the “local grain economy” they want to see. Berndt and Szajunk have ambitious goals. They’ve got a lofty annual sales target and a plan for organic certification. They’re also hoping to add another climate-controlled space where they can clean and store wheat. The West Bottoms location is large, but it’s filling up fast. Plus, it’s on the third floor. When the freight elevator broke down, they had to haul wheat up the stairs, bucket by bucket.

Add “mechanization” to that list of goals. Even when the elevator’s functioning, Marion Milling is still a low-tech operation. Berndt lifts every pound of wheat into the hoppers himself. He mills every batch of flour himself. He and Szajnuk bag all of the flour by hand and go Dutch on the delivery runs.

“I should probably hire some more people, but I’ve been stubborn about it,” Berndt says. He squints out at the mill floor, where 2,000-pound totes of wheat are lined up like soldiers, waiting to be milled. “It’s probably time.” 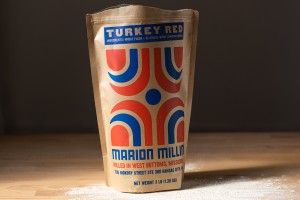 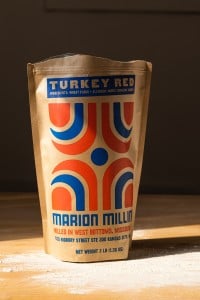 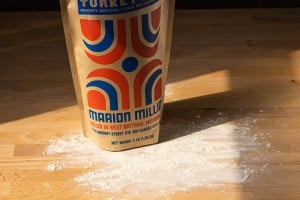 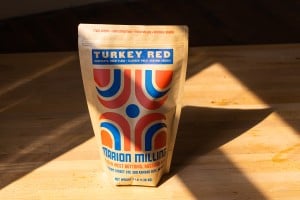 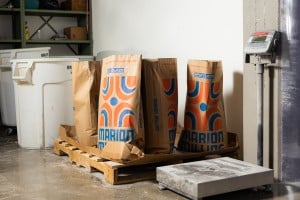 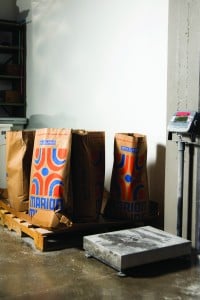 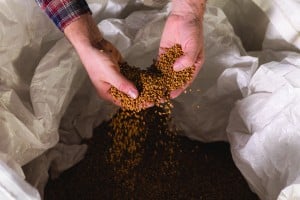 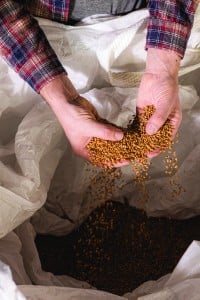 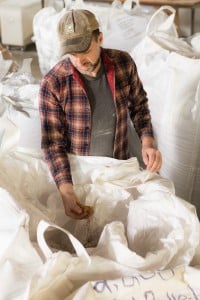 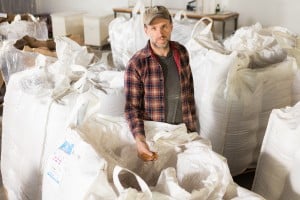 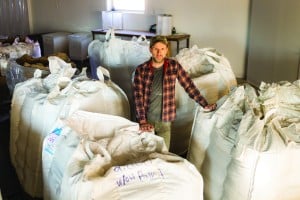 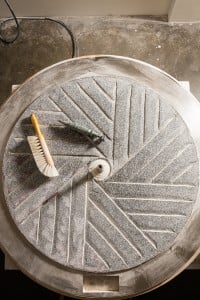 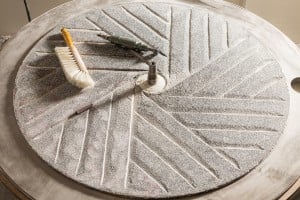 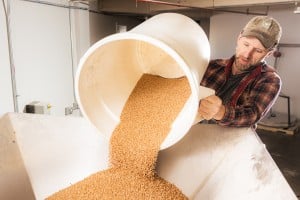 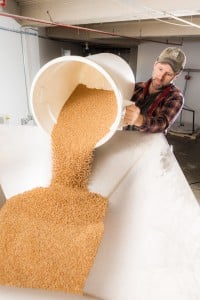 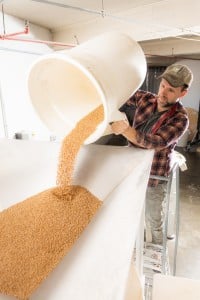 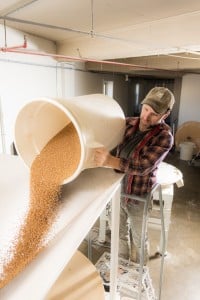