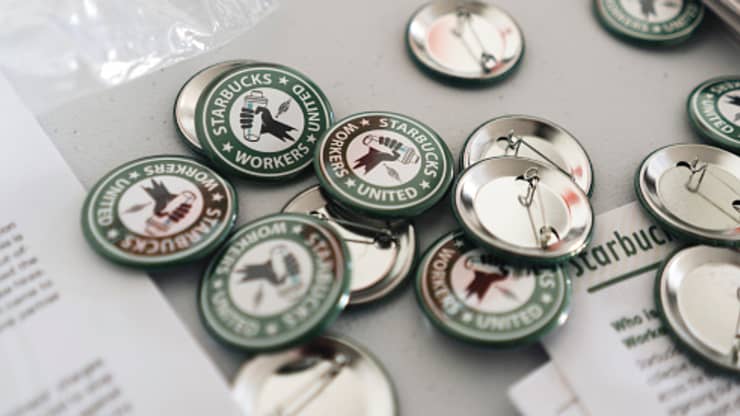 Employees at a Starbucks in Independence (18710 E. 39th St Independence, MO, 64057) became the third store in the Kansas City metro to file for unionization. They join employees at the Country Club Plaza and Overland Park locations in the fight for a union. // Photo by Libby March/Getty Images

Employees at an Independence Starbucks ​​(18710 E. 39th St Independence, MO) announced Monday they are unionizing. The baristas join the Plaza and Overland Park storefronts as the third Kansas City area Starbucks to unionize.

The Independence Starbucks workers are organizing with Workers United, one of the most active unions in the country.

In a letter to Kevin Johnson, president and CEO of Starbucks, employees noted the exponential growth of unionizing campaigns at Starbucks across the country as their inspiration. They also wrote about grievances specific to their store and retaliatory behavior from management.

“From the moment we were first interviewed for our positions, we were promised ‘a culture of warmth and belonging,’ and an environment that ‘inspires and nurtures the human spirit.’ Both mission statements from the company have not only failed to be met, but rather have had the opposite be true,” the employees wrote in the letter.

“In our store, we have not only witnessed racism on a case-by-case basis, but also within the foundational construction of how our store is built. With a union, we could successfully address these issues.”

Workers also pointed out one specific instance where there was flooding in the store. Despite health risks, employees were forced to work in standing water and clean potentially biohazardous material with no protection.

Raymond Wu, a barista and unionizing leader at the Independence storefront, says that the flooding is just one example of why they need the protection of a union.

“We expressed a lot of grievances to upper management, and we just want to make sure that voices are heard,” Wu says. “Starbucks wants to be known as a great company—they want to thrive and be excellent. That’s great, but we can’t be putting partners or employees at risk.”

Wu began working at Starbucks to learn more about coffee. After voting to unionize, he feels like his coworkers are family and hopes the store regulars will also see them as such.

“We took the time to get to know them, their names, and their history other than just knowing their drinks,” says Wu. “We want to make sure that with this unionization they can see that we’re not just employees working at a coffee shop, but we’re actually real people.”

CJ Miller, a union leader and shift supervisor at the store, says that watching a Starbucks in Buffalo, New York, become the first in the U.S. to unionize helped them realize the need for collective action. Before the store officially launched its unionizing campaign, Miller says higher management began using union-busting tactics.

“They posted little pieces of paper in the back that expressed anti-union views, and they’ve expressed that in a store meeting we had recently,” Miller says.

For Miller, unionizing is the only viable path to ensure Starbucks truly lives up to its mission to create a safe and healthy workplace.

“They like to say that at every Starbucks meeting that there are two empty chairs at the table—one for customers and one for baristas. Our end goal is that the chair at the table for baristas is no longer metaphorical,” Miller says. “Right now, we can say everything that we want fixed, but they don’t have to listen to us. We’re looking for a greater voice within the company and to improve the overall partner experience within our store.”

BIG NEWS! Starbucks workers at E. 39th and Arrowhead in Independence MO are joining the @SBWorkersUnited movement. The “Show Me” state is “Showing Us” how it’s done! pic.twitter.com/nqyiKutC3u

Pete DeMay, organizing director for the Chicago and Midwest Regional Joint Board of Workers United, says that Starbucks workers are motivating other service industry employees to unionize.

“Starbucks should pay enough to keep people around. They should provide enough hours so people can support themselves and their families. You create a sustainable brand by taking care of folks,” DeMay says. “I encourage the company to stop paying millions of dollars to union-busting law firms and to value [their] employees, let them have a seat a real seat at the table and recognize their union.”

Josh Crowell, a barista unionizing the Plaza storefront, says a union at a third metro-area store will help all of their efforts be more successful.

“[Knowing that a third store is joining the KC movement] feels validating. Not only do we know, this is the right move for us, but others think it’s the right move for them,” says Crowell. “Together, we know we are stronger, and that will continue to show as more stores join the movement. To the newly organized partners, congratulations! Know we’ve got your back. Kansas City is a union town.”

Public support for the union is crucial to its success. Miller hopes customers realize the importance of unionizing the coffee chain. They also want to inspire other workers to demand better working conditions.

“We enjoy our job—it’s a fun job. However, we just want to be treated fairly, to be treated equally, and to have a voice in what we’re doing. We’re hoping that it not only shows a human side to us but can inspire people in other fields to realize that you can always have a greater voice within your company. When you’re the ones on the frontlines, per se, and running the company, you should have a voice and what goes down there.”