Crowds chanted "Get up, get down, Kansas City's a union town" in support of the workers. 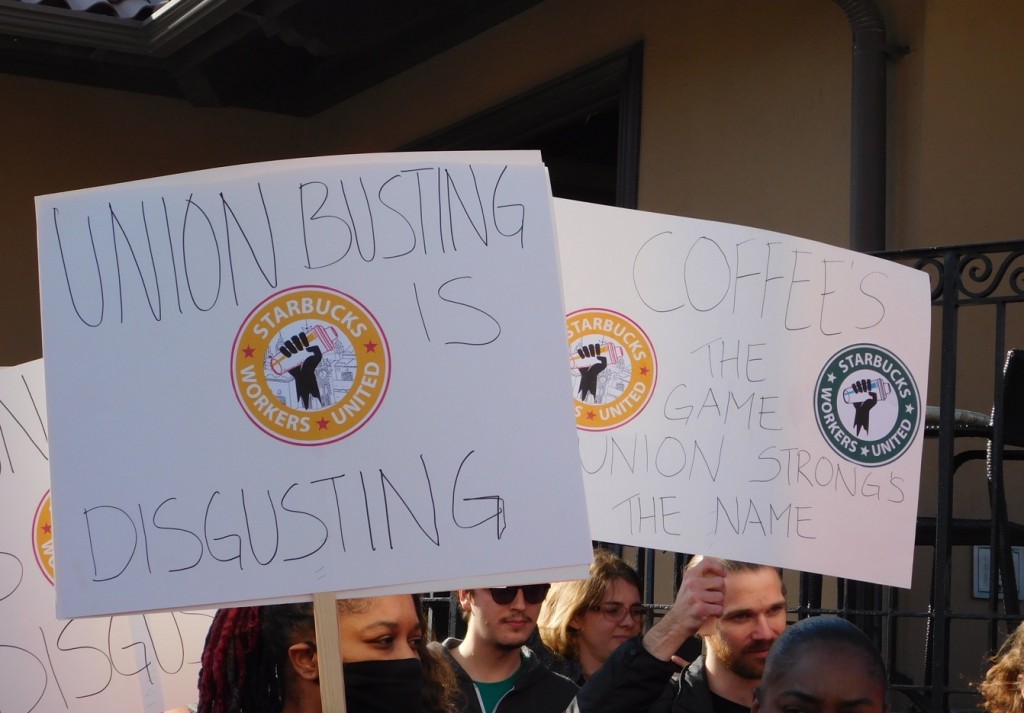 Dozens of people, including Starbucks workers, workers with Stand Up KC, faith and civil rights leaders, and community allies gathered Thursday outside the Country Club Plaza Starbucks to support workers at the Plaza and Overland Park Convention Center storefronts who have recently begun the process of unionization.

The protest began at 3 p.m. with a rally outside the storefront and was followed by simultaneous demonstrations at the two Kansas City locations.

Unionizing means everything to Chris Fielder, a member of the Plaza Starbucks unionizing team.

“This is the difference for our entire generation. We’re not standing by and letting low-wage work stay low-wage anymore,” Fielder says. “We want to make sure that we have the same rights afforded to everybody else—unionizing is a civil right.”

Shirley Mata, recording secretary and political liaison for the UAW Local 249, came to the protest to demonstrate the need for organizing and supporting the efforts of Starbucks workers.

“These workers were critical and essential, but not essential enough to give them a pay raise or a union,” Mata says. “I hope that [Starbucks] realizes that they’re not going to win this and that they need to sit down and negotiate.” 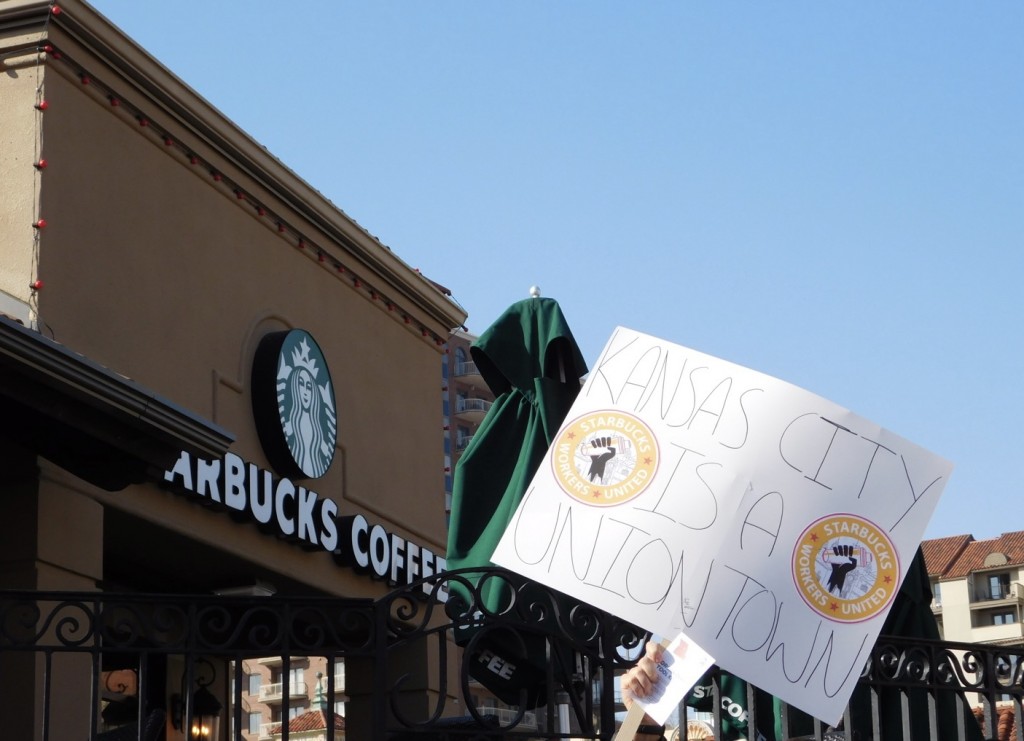 A poster reads “Kansas City is a union town.” // Photo by Savannah Hawley

This protest comes after Starbucks corporate’s aggressive anti-union actions towards workers who have unionized stores across the nation. The company has even gone so far as to create a website titled We Are One Starbucks to dissuade employees from unionizing.

Terrence Wise, a McDonald’s worker and a leader in Stand Up KC and the Missouri Workers Center, gave the Starbucks workers advice on how to stand up to union-busting. Wise says workers need to stand together and not be intimidated because collective action is the only way to gain protection.

“As a fast-food worker, I’m proud to see workers unionizing,” says Wise. “Organizing unions is how we’re gonna change the industry and force multibillion-dollar corporations like Starbucks and McDonald’s to respect us.”

Hope, who works at the Overland Park Convention Center location, says that she wanted to work at Starbucks because of the great benefits the company provides. But she says that corporate threatens those same benefits anytime a worker brings forward a complaint or issue.

“Unionizing isn’t an attempt to separate us from Starbucks, but to strengthen our relationship with the company,” Hope says. “We deserve a seat at the table. We strive to create a democracy in our workplaces. We require the autonomy to problem solve collectively within our own stores to help combat the issues we face day in and day out. Without that autonomy, we can’t carry out the Starbucks mission and values.” 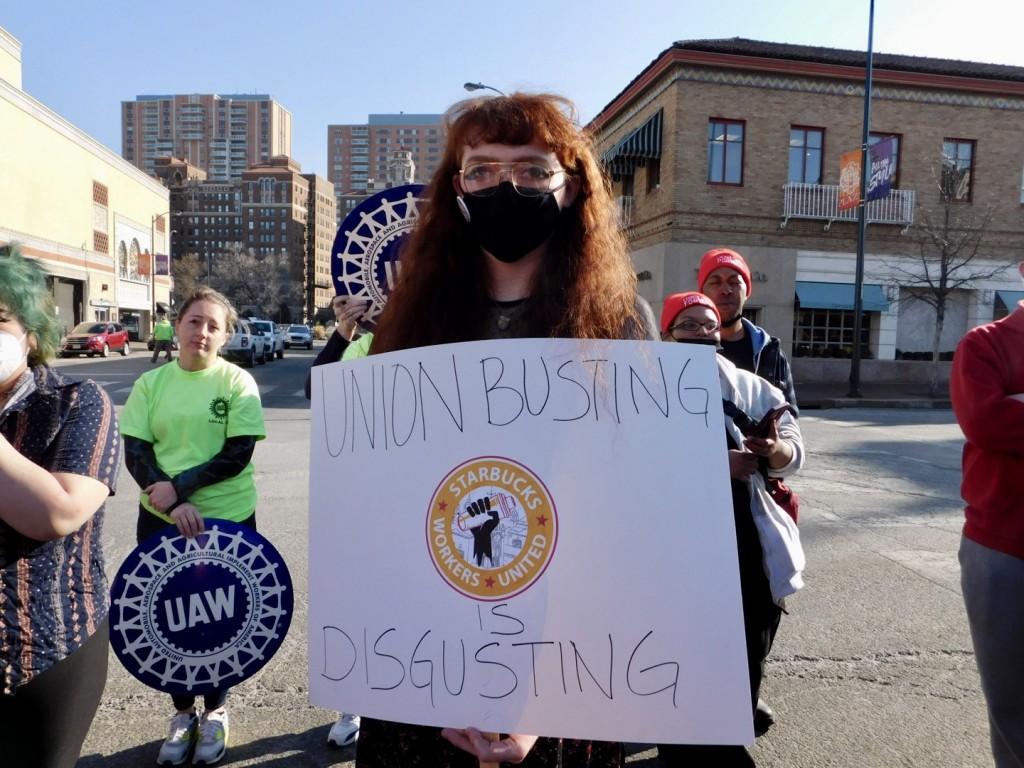 The protest was scheduled to coincide with a mandatory anti-union meeting that the corporation regularly hosts to quell unionization. However, after the crowd gathered, corporate canceled the meeting “due to unforeseen media coverage.”

“23 minutes we’ve been out here. That is all it takes for a multi-billion dollar corporation to fold,” says Josh Crowell, a member of the Plaza Starbucks unionizing team.

In addition to “captive audience” meetings at both stores, employees of the Overland Park Starbucks have been threatened with a loss of benefits in response to their unionization efforts. In response, workers filed charges with the National Labor Relations Board Feb. 22.

Alyssa Marcy, a supporter of Starbucks Workers United and partner to one of the Plaza store’s organizers, says that the company’s behavior has gotten increasingly threatening.

“As soon as they announced [the union] publicly and sent out that petition to the CEO, Starbucks has become more involved in the store than before and seems to be spending more time watching everyone like a hawk trying to find reasons to get rid of people,” Marcy says. 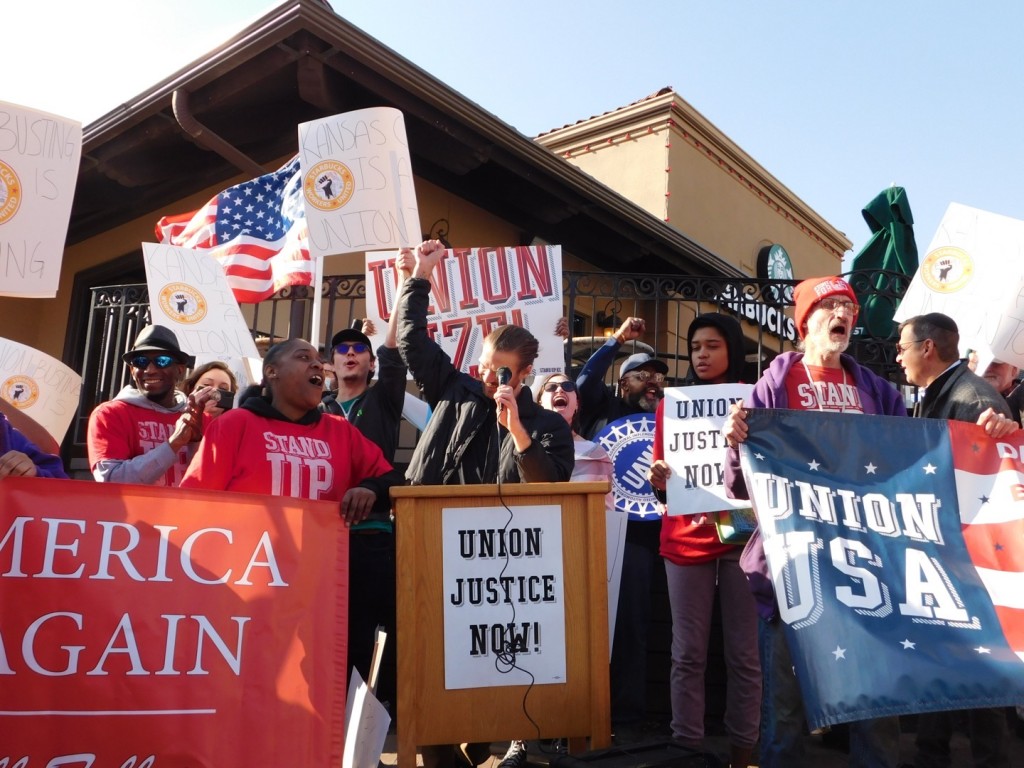 Josh Crowell, a member of the Plaza Starbucks unionizing team, speaks at the rally. // Photo by Savannah Hawley

Crowell says that Starbucks Corporate preaches the creation of “third place experiences”—a safe and welcoming public space consistent with its mission and values, where people are treated with respect and dignity—at its training.

Since the company has been trying to stamp out unionization, which employees say is in line with Starbucks’ purported mission, Crowell says it’s up to the workers to create those third place experiences for themselves.

Clarence Brown, the President of UAW Local 31, says it’s important to support workers everywhere and stand in solidarity with all unionization efforts.

“I want to make sure that the Starbucks people understand something clearly here. That is, don’t worry, we got your back,” Brown says. “This ain’t about just Starbucks. This is about working families throughout this country.” 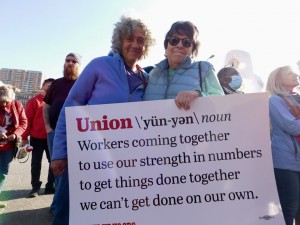 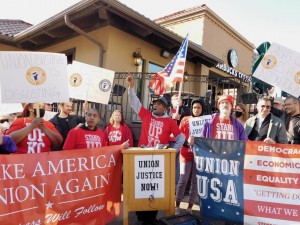 Terrence Wise, a leader with Stand Up KC and Missouri Workers Center, speaks at the rally. // Photo by Savannah Hawley 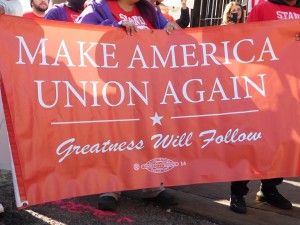 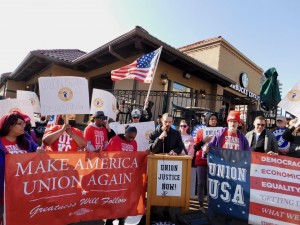 Josh Crowell, a member of the Plaza Starbucks unionizing team, speaks at the rally. // Photo by Savannah Hawley 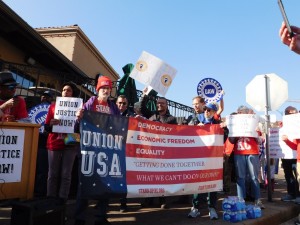 Protestors outside of the Plaza Starbucks location. // Photo by Savannah Hawley 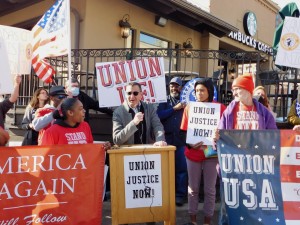 Rabbi Doug Alpert of Congregation Kol Ami and the Vice President of Missouri Faith Voices spoke at the rally. // Photo by Savannah Hawley 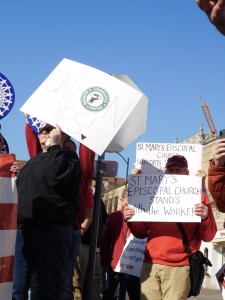 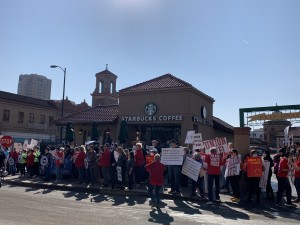 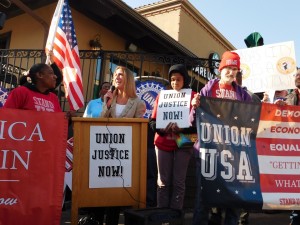 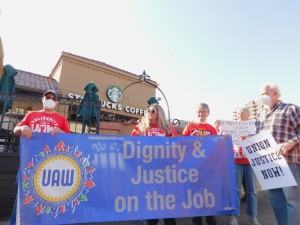 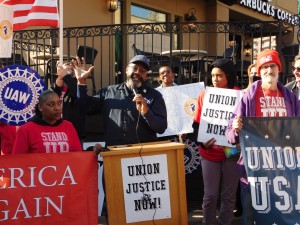 Clarence Brown, president of UAW 31, speaks at the rally. // Photo by Savannah Hawley 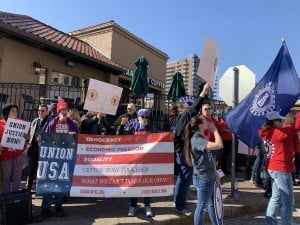 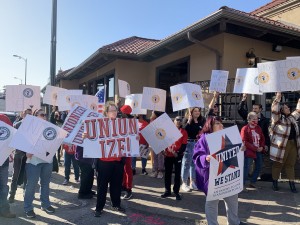