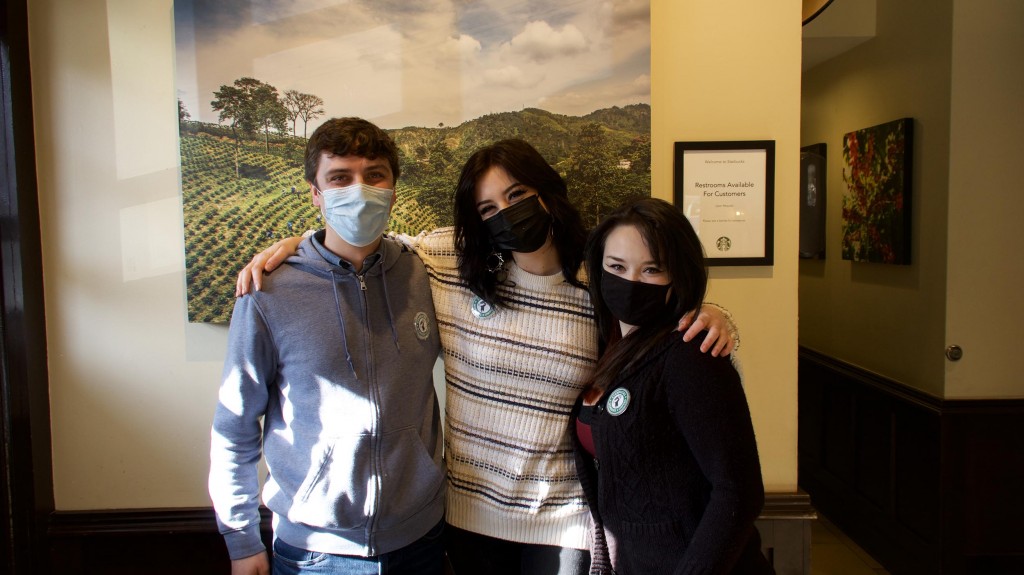 Kansas City’s plaza Starbucks is no stranger to the concept of unionization. When I worked there, from summer 2019 to spring 2021, employees would speak in the back openly about how things needed to change, eyes darting around before daring to speak the word “union.”

There were many problems that the pandemic only exacerbated. Poor pay, high volumes of customers, frequent safety-threatening incidents, and—worst of all—a culture of sexual harassment that young women employees faced from customers.

As just one location of a worldwide corporation, it felt impossible to even consider leveraging our power to create a union.

After I left, two stores in Buffalo, New York, announced their intent to unionize. One of the locations voted to create their union, making it the first in the country, and a once-lofty goal felt much closer.

When Addy Wright, current shift supervisor at the Plaza Starbucks, told me a few employees there were discussing a plan to unionize, I was still skeptical. While the store manager on the Plaza remains the most empathetic and hardest working boss I had ever worked for, things that needed changing were frequently stonewalled by corporate higher-ups.

If something did get fixed, it was often a temporary fix to a permanent problem.

In the coming months, I was proven wrong. Wright kept me updated on progress, eventually letting me know that on Jan. 31 the team would officially email their letter with intent to form a union against Starbucks CEO Kevin Johnson.

I was there for moral support and was blown away as Wright and union team peers Chris Fielder and Cali Sacramento spoke emphatically about the necessary store changes. 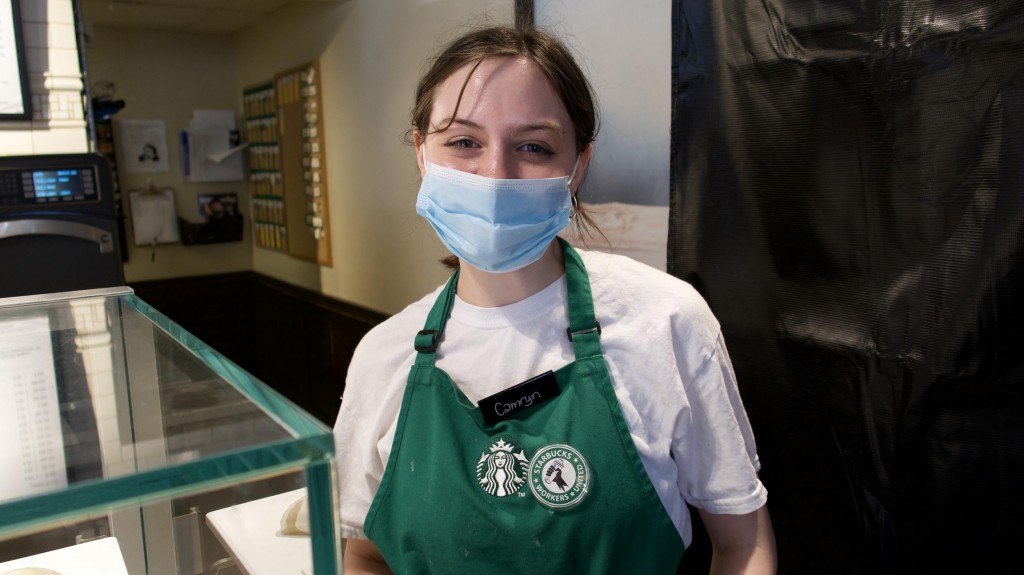 Part of the letter to Kevin Johnson interprets the Starbucks mission statement: “We can’t nurture the human spirit on the clock as long as we’re underpaid and undertrained. We can’t inspire our neighborhood while our partners struggle to afford living there. We can’t make customer connections unless we feel safe around our customers.”

The staff feels motivated and prepared to fight for their right to be heard despite the company’s “union-busting” tactics. In their eyes, this is necessary, and they will do whatever it takes.

Zoe, a 17-year-old barista on the Plaza, has been a key player in the union fight and one of the biggest reasons cited as a need for the need.

“There was a leak over by the cold drinks bar for ages. It had been reported multiple times and nothing was done about it,” Zoe tells me. “It took me falling and being out for two months with a concussion for them to even put a mat there.”

This story was brought up in several interviews given by union leadership when their letter was filed. In a few days, corporate quickly sent someone to finally replace the fridge that had been causing the leak.

The store’s list of requests is perfectly reasonable—financial security, seniority pay, the ability to earn credit card tips, functional equipment, and for the company to simply acknowledge their contributions. Most importantly, these employees are looking for safety.

There is a sexual harassment issue running rampant at the Plaza Starbucks. It was not uncommon, during my tenure, for a woman-presenting employee to change their name tag to an alias because they didn’t feel comfortable with customers knowing their real name.

I have seen my friends be repeatedly put in uncomfortable situations by customers who were generally nice to the staff, and—while creepy—hadn’t done “enough” to warrant being banned from the store.

One employee had to change her Instagram handle because older male regulars were frequently finding her and following her, sometimes sending her DMs.

Security guards were sometimes posted in the lobby to look out for any safety incidents or harassment. While their presence made a difference, they were removed from the store after just a few months.

“A coworker and I were walking to our cars at night and were followed by a man who had been disruptive in the café all day. He reverted to sexually harassing us with foul language and offered us drugs while we were alone in an empty parking garage. It was also during this time we were demanding security, and this situation could have been avoided if we were listened to,” a former barista says regarding a situation that transpired after security was dismissed from the store. 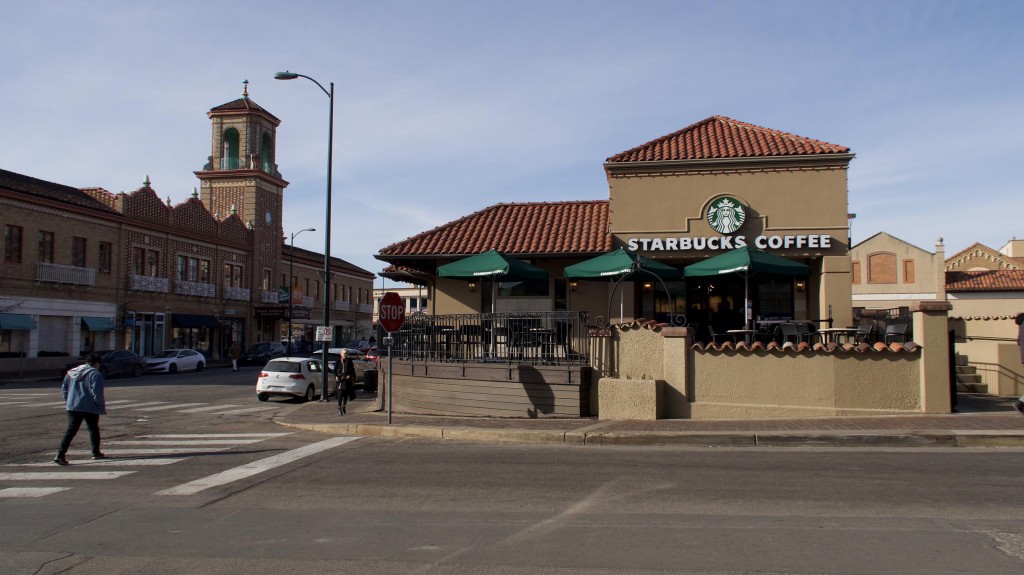 Wright also brings up the issue of safety.

“It’s stressful for me when we have all these incidents, and we have no form of security. The Plaza’s security staff—they’re not allowed to touch people,” Wright says. “They’re not allowed to remove people. They can’t do any more than I can and just say, ‘You can’t be in here.’ It’s really stressful feeling like I’m responsible for the safety of a group of high school kids when, at night, I’m the most intimidating person there.”

Being intimately close to this environment and the people it affects has made me strongly believe in the mission of this union. It’s catching fire across the country, and now Starbucks is beginning to retaliate.

Seven Starbucks employees on the union team in Memphis were fired. A union leader at a Buffalo location was effectively terminated when she took a second job. All of this is too common a practice for Starbucks employees who rarely make enough to pay rent.

Such aggressive tactics are yet to come on the Plaza, but there will be meetings with corporate in the future to gauge the strength of union solidarity.

The team on the Plaza is sure their vote towards unionization will be postponed until the last legal opportunity, as Starbucks has already been doing with other locations. Soon enough, their voices will get a formal hearing. For now, the employees wait—and remain dedicated to their jobs and their mission.

On Thursday, March 3, Starbucks workers will be joined by Stand Up KC and other civil rights allies for a press conference and rally at the Country Club Plaza. The press conference will begin at 3 p.m. and will include speakers from both the Plaza and Overland Park Starbucks stores where workers are organizing.