Zombies in Evil Dead dance their hearts, guts and brains out 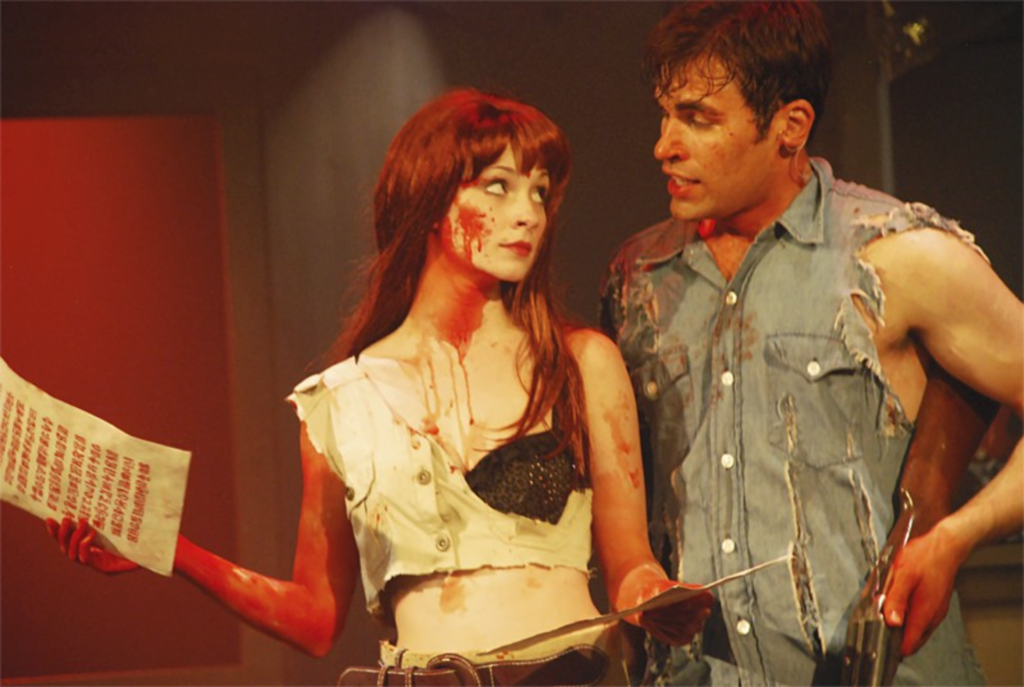 Evil Dead: The Musical takes everything you love about the horror genre — graphic violence, gratuitous sex, senseless mayhem, paranormal panic and epically bad decision making — and sets it to music the way a pyromaniac sets a warehouse on fire.

Coming after its audience, Evil Dead: The Musical is determined to mercilessly entertain. But comedy, like horror, is a kill-or-be-killed proposition, and uneven performances and basic production issues prevent Steven Eubank’s imaginatively frightful production from achieving total slaughter.

A fast and loose hodgepodge of Sam Raimi’s unholy trinity of horror flicks (The Evil Dead, Evil Dead II and Army of Darkness), Evil Dead: The Musical retains the movies’ copious bloodletting and balls-to-the-wall insanity. The show may be most rewarding for the fans, who hooted at inside jokes and shouted along with classic lines the night I attended. But the
musical’s creators have made sure that their story line requires no familiarity with the source material. You can be as clueless as a horror-movie protagonist and still have a great time.

That line is an engraved invitation for hell-raisers from beyond, who RSVP promptly. The next thing Ash knows, he’s fighting demon-possessed, gang-raping trees and his zombified former buddies. Good thing he has a sawed-off shotgun (the famous “boomstick”) in one hand and a chain saw affixed to the bloody stump where the other used to be.

Sam Wright has flexed his leading-man stud chops in productions such as Kiss Me, Kate and The Light in the Piazza. In the role of the well-meaning Ash, that same heroic masculinity makes for effective deadpan humor. The straighter Wright plays it, the harder the audience laughs, especially as the wholesome Ash finally comes into his bare-chested, boomstick-raising, zombie-blasting own.

With Evil Dead‘s premise established, its victims — er, characters — introduced and ancient evils unleashed, we’re ready for heads and fun to roll. Disappointingly, however, both do so only fitfully. For one thing, the first act’s sequence of zombifications, which should be hilarious, never really gets there. And repetition doesn’t help. Though the actors come to life for the peppy songs, they seem lost and listless in between.

Some of the blame can be attributed to needlessly murky lighting and overuse of fog effects. The cast also suffered from an unfavorable sound mix and a soundtrack whose static threatened to drown out lyrics and dialogue at the preview show I saw. It’s kind of hard to emote when you’re not clearly seen or heard.

Despite pneumatic physiology, Olivia Marsh’s dizzy Shelly goes flat, proving the axiom that dumb is the hardest role to play. Marsh improves in her second role, bossy love interest Annie, who gets to sing the show’s catchy doo-wop “All the Men in My Life (Keep Getting Killed by Candarian Demons).” The hapless Chioma Anyanwu is relegated to the cellar early on, thenceforth seen only when she pops up, demonic Jack-in-the-box style, to spew awful puns — the show’s one true abomination. Ethan Miller confuses a diffident character with a diffident characterization in the role of Annie’s nebbish boyfriend, Ed. He comes to life only when his character is transformed into an inexplicably cabaret-decadent demon.

Thankfully, the introduction of a B plot infuses new life into the story, most notably with the arrival of Dana Joel Nicholson as the charismatic redneck Jake, who owns the stage with “Good Ol’ Reliable Jake.” The second act’s hilarity mounts with the body count. Ash’s friends turned zombies are far more amusing as singing and dancing “Deadites” than as menaces, and the show comes most alive when they perform the Rocky Horror homage, “Do the Necronomicon.”

Evil Dead‘s sharpest weapons are its comically low-tech special effects and its songs, which parody a grab bag of corny musical styles and are energetically performed and entertainingly choreographed. The show also has fun with exploitative movie conventions, such as Annie’s strategically disintegrating costume.

The insatiably bloodthirsty can sit in the front rows, known as “The Splatter Zone,” where clothing may get sprayed with bloody Jackson Pollock designs (a white T-shirt is optimal) or be protected by the trash bags provided. The spurting blood looked to be more of a fine, refreshing mist, but it still elicited shrieks of delight.

Bloodthirsty myself, I kept fantasizing about ruthlessly hacking the draggy second quarter to turn Evil Dead into a livelier, faster 90 minutes. As it is, even with some dead spots, Evil Dead: The Musical still kills.