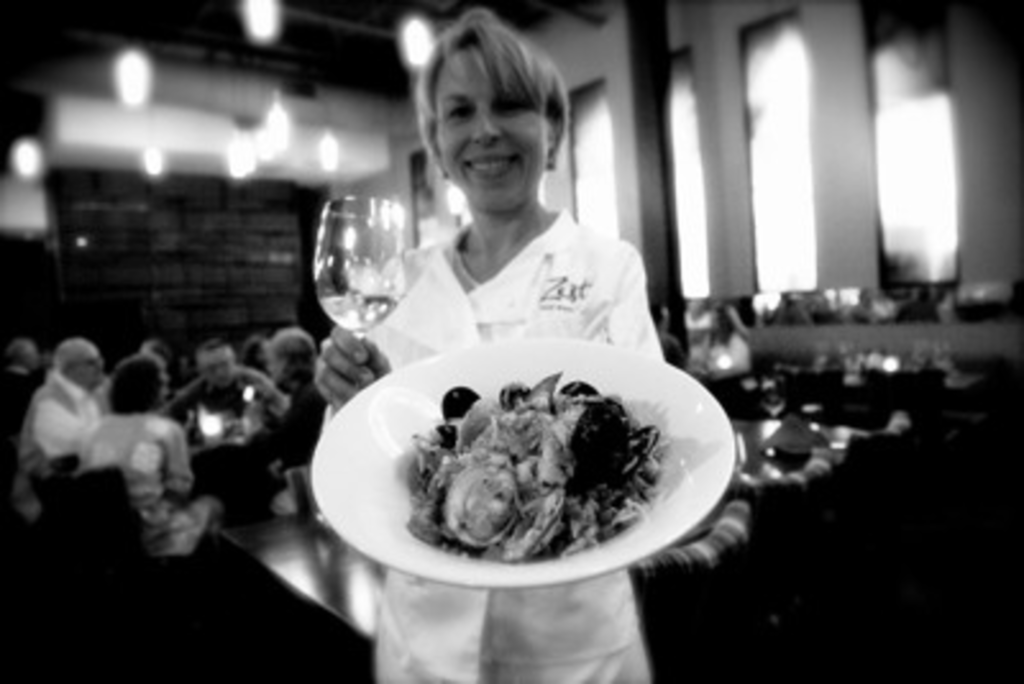 In that February review, I agreed with seemingly everyone else that Joe DiGiovanni and Mike Schreiber’s sleek Leawood bistro was attractive and comfortable. But I thought that chef Eric Eckard’s “original upscale comfort food” wasn’t nearly as exciting as the décor. Apparently I wasn’t the only one who felt this way because, in May, DiGiovanni and Schreiber replaced Eckard with a more high-profile contender: Linda Duerr, formerly of Lidia’s and Frondizi’s.

The Zest Web site put it this way: “Due to a serendipitous series of events, we were able to recruit Linda to Zest, where she has embraced the essence of upscale comfort food and has added her unique culinary talent to the menu.” The serendipitous events went like this: When Frondizi’s closed in May 2007, Duerr moved to owner Jimmy Frantze’s other Plaza restaurant, JJ’s. DiGiovanni tells me that he was interested in hiring Duerr then, but that Frantze, a good friend, wanted to keep her at JJ’s to rework that restaurant’s menu. But as the economy tanked, Frantze couldn’t afford to keep Duerr on salary and laid her off in March. Two months later, DiGiovanni and Schreiber snagged her.

Eckard is still at Zest as kitchen manager. I can only imagine how he might have felt watching Duerr make dramatic changes to his menu. But frankly, the restaurant is better for them.

At least three of Eckard’s creations remain: the meatloaf (described on the current menu as “already a classic,” though I thought it was bland back in February), the veal liver and onions, and the over-praised truffle gouda mac and cheese (made with country ham). Because I didn’t particularly care for any of these dishes seven months ago, I wasn’t eager to taste them again.

“Are these dishes prepared any differently since you’ve gotten a new chef?” I asked the pretty young server, already a nine-month veteran here, when I returned to dine with Bob, Truman and Carol Ann.

“No,” she answered. “Those dishes are pretty much the same. But everything else is different … and much improved, if you ask me.”

Duerr has pared down the dinner menu a bit. I noticed that the hot dog was gone, as well as the house-made potato chips and the chili. Also, the prosciutto bread, an Eckard starter from the opening menu that was terrific in concept but poorly executed: A baguette was split and scattered — not “stuffed,” as the menu promised — with a stingy amount of garlic butter, prosciutto and Romano cheese. “We could never get it consistently right,” DiGiovanni told me later. “If we can, we’ll bring it back.”

There’s no rush. Duerr’s new starters can hold their own. I was particularly impressed with her fluffy crab cakes, lightly drizzled in chipotle sauce and presented on a relish of fresh sweet corn, chopped red peppers and black beans.

I wished the Yukon gold potato pancakes had been served hotter, but the thick discs of grated potato, onion, carrot and bits of tart green apple were fried (though not especially crispy) and served with scallion-studded sour cream. Truman and Carol Ann thought that these pancakes were the standout starter, but I preferred that night’s starter du jour: a small mound of fresh gnocchi dripping with satiny garlic-almond cream sauce, a few ribbons of sliced asparagus and a flourish of tissue-thin prosciutto. There wasn’t a lot there for the price, but it was visually stylish. “Overproduced,” sniffed Truman.

Bob was the only one who ordered a salad. The pretty little side salad was bedecked with lots of chopped tomatoes, and the server brought a big bowl filled with enough soft, fat yeast rolls for all of us to share. While I slathered mine with whipped butter, we took inventory of the crowd. “It’s very Leawood,” Truman said. “Over 40, well-dressed, nice cars, drinking cocktails made with top-shelf booze.”

We agreed that the clientele is more upscale than the crowd that once lionized DiGiovanni’s namesake Joe D’s wine bar in Brookside, a bistro that was enormously popular in the 1980s and ’90s. (The space is soon to reopen as chef Celina Tio’s new Julian.) With Zest, DiGiovanni reportedly wanted to create “a place that was the talk of the town.” Whether it is now or ever will be is up for debate, but it clearly has loyal fans — many remain dazzled by DiGiovanni’s charisma. No matter how good the food is, it’s still DiGiovanni’s effervescent personality that draws a lot of customers. When he’s not in the house, the place feels kind of boring.

Still, Duerr’s new menu has its own personality. Carol raved about the house paella, a bowl of clams, plump mussels, bits of lobster and startlingly big but succulent shrimp and orzo, prepared risotto-style in a sexy, spicy saffron broth. I confess that I cringed slightly at the $23 price tag on the fish and chips that Truman ordered for dinner. I had just eaten a first-rate dinner of beer-battered cod and chips at a Waldo saloon for nearly half that. But Zest’s version is the Tiffany standard: flaky British fried cod — and a jumbo shrimp and a big chubby scallop — in a feather-light shell of fried batter, more delicate than tempura, and served with fat sweet-potato fries. Is it worth 23 bucks? Truman said no; I said yes.

Bob loved the orecchiette (one of the less costly entrees at $17) tossed with rapini, garlic, red chili pepper, and the delicately spiced sausage made by the Mendolia family from Joe’s grandfather’s recipe. DiGiovanni won’t give away its secret, but there’s no fennel in it.

I was somewhat disappointed with the pan-fried chicken breast, which wasn’t as tender as I thought it should be; calling it “stuffed” with Manchego cheese would be an overstatement. But I loved the braised greens in lemon butter sauce.

Our server gave a glorious description of that night’s dessert special, a triple-layered chocolate-mousse creation on a base of fudgy ganache. It was pretty and very good, but so familiar: The commissary bakery that creates this confection sells the same pastry to a half-dozen other restaurants in town. Much more exciting was the house-made berry shortcake, served on a wonderful, light and flaky lemon-basil biscuit, split open and stuffed with sliced tart strawberries and sweet blackberries and a mess o’ fresh whipped cream. Truman proclaimed it “the best thing on the menu.”

I’d say several items would qualify as the best things on Linda Duerr’s new menu. But right now, the best thing about Zest is simply that she’s there.