Your busy August First Friday starts with the Royals

August 5 is a good day to play hooky and eat nachos before heading out for your usual evening art rounds: First Friday in the Crossroads is also Arts Day at the K, where $5 of your ticket to the 1:15 p.m. Royals game against the Toronto Blue Jays goes to the ArtsKC Fund, which supports the artists working in our community. At the stadium today are artists, exhibits and performances. [Editor’s note: This is actually Sunday, August 7. We regret the error.]

Hilliard Gallery (1820 McGee) opens Feminine by Teresa Magel with a 6-9 p.m. reception. The new body of work, two years in the making, demonstrates what the artist calls “nontraditional feminine beauty,” a visual representation of what it truly means to be oneself. Magel says she has translated her recent experiences of heartbreak, falling in love, being a mother and traveling the world into these new paintings.

For a show of paintings by the late David Goodrich (as we near the second anniversary of his death), Ben Raskin has selected works for the retrospective Societal Symbolism that have not been on view before. Also at Leedy-Voulkos Art Center (2012 Baltimore) is a new solo show by Rashelle Staley-Stutts. Contemporary Abstraction: Outspoken Soliloquy of Dreams is the artist’s answer in paint to the way many of us pour out our confessions, unfiltered reactions, meals and political opinions on social media. What doesn’t make it to Instagram or Facebook gets jammed up inside our subconscious, Staley-Stutts suggests, and she asks us to consider paint as her flashing cursor in this series of highly pigmented images. She writes: “Emotions and memories become faintly familiar to the viewer, like a song you once heard … the flirtatious glance from across a crowded room … the perfume of a lost love … the dream you awoke from in the middle of the night.” 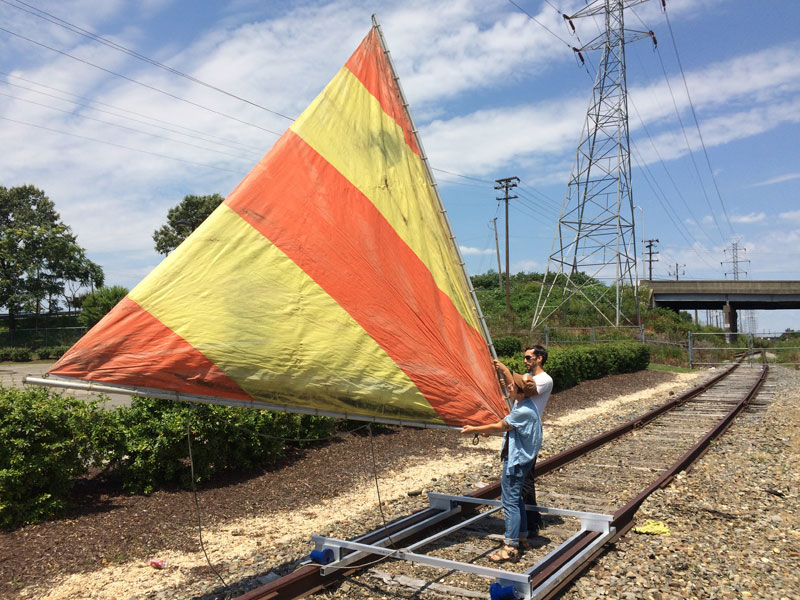 Once again, Front/Space Gallery (217 West 18th Street) hosts an exhibition that is more than just things hanging around a little room. Giving us a new perspective on Kansas City is Rail Sail, a collaboration among Joe Riley, Audrey Snyder and Ricki Dwyer that expands beyond the opening and beyond the gallery. August 5 launches an information center at the gallery and two weeks of research by artist and educator Dwyer, who is on tour with her sewing machine; artist and master of yachts Riley, who has sailed aboard the 112-foot schooner Argo; and artist-chef Snyder, who tours the country on a bicycle, on and off railroad tracks. Events include a “crew meal” August 6, an artists’ talk August 13 and a workshop and musical performance August 14.

Imagine That (2040 Central) has spent the past four years providing studio space and programming for adults who have developmental disabilities. From 6 to 10 p.m. Friday, the space puts on its annual Southwest x Central Street Fest, highlighting its work with art, music and performances. There are free refreshments from Boulevard, Door-to-Door Organics and Farm to Market Bread. Look for Guerrilla Docents (who usually don’t announce their location) Melaney Mitchell and Blair Schulman to help interpret with you the sculptures and fiber works on display inside the gallery.

MOD (1809 McGee) is open from 5 to 10 p.m. Friday with collaborative art by Burn353 and VisualSoul, another show by Richard Day, and music by Mind Gallaxy and VJ Surya.

The Kansas City Society for Contemporary Photography is hosting a show of 4-inch-by-4-inch pics by members at David Morris Photography (2131 Washington) as a preview to the Kansas City Artists Coalition 40th anniversary next Friday.

KC Wordshop is inviting poets, artists and anyone else who wants to participate to an open mic at 2010 Baltimore from 6:30 to 8 p.m. Friday to address the violent events in Baton Rouge, Falcon Heights and Dallas. Show up at 6 to sign up for “Use Words: A Vigil on Violence.”

This weekend is also Midwest Word Fest, with local published poets such as Jose Faus speaking alongside musicians and comedians at venues such as Madrigall, the Lyric Opera and Uptown Arts Bar. See the schedule here.