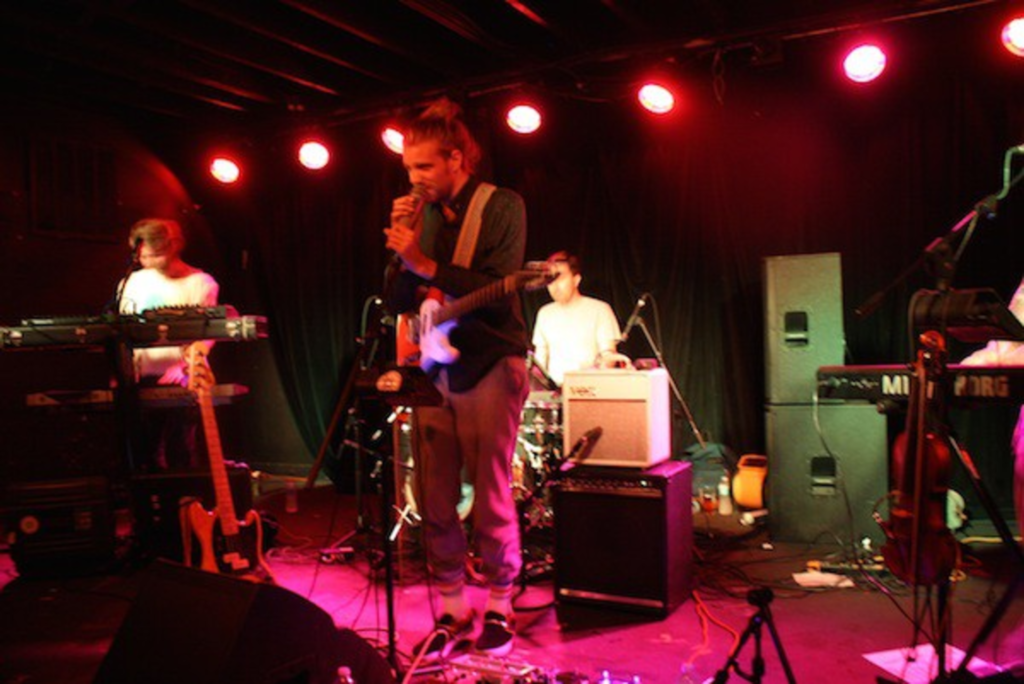 Saying that Nick Van Hofwegen suffers from a slight language barrier might be giving the Dutch artist too much credit. A talented cartoonist in his own right (Van Hofwegen has designed cover art for the likes of Robin Thicke and Foster the People), the lead singer — and highly reiterated “creative mastermind” of the band — had a few interesting anecdotes behind the naming of the band when asked in the Riot Room’s back alley.

“It’s a very silly name,” Van Hofwegan told me. “You can’t really tell what kind of music it’s going to be. It just sounds weird and intense. I like how it could be a rap group or it could be what it is or it could be way louder. Kinda just like the juxtaposition of the sound which could be tender and mellow at times and the name is very harsh.”

…So far, so good. I was steeling myself to write an article full of misplaced encouragement for a terminally ill lead singer or get behind de-stigmatizing mental illness, but I believe the word Van Hofwegan is looking for is paradox, not juxtaposition.

He went on: “I came up with it because my manager used to throw these parties in New Orleans that I would do the fliers for and come up with general concepts, and one of the concepts I did for one of the parties I named ‘Young and Sick.’ It was one of the parties that did really well, and I saw the name and wanted to take it back, and I didn’t even know what for… it just kind of stuck. And now it’s just this weird name. One of the reasons i had ended up using it was I couldn’t believe no one had used it. So simple.”

The band name “Thin & Hungry” also isn’t currently taken – although apparently “Hungry Skinny” is after a quick Google search (the more you know) – but that doesn’t mean it should be. Band names are notoriously hit-or-miss, but this group is especially unfortunately christened.

Musically, Young & Sick hasn’t yet found a good sound balance between the instruments. At the start of last night’s set, bass tones were conspicuously missing – produced by the drums or either keyboard onstage. No song that was played felt substantive or even fully finished. Judging from the multiple keyboards onstage, Van Hofwegen obviously favors them. But they were turned up way too high; high enough to produce that tinny, carousel-music-like tinkle that you get when you’re about to blow out your speakers.

The entire set was one long duet between Van Hofwegen and his back-up singer, a woman hired out of Bushwick who played the violin like a ukelele. And even though their microphones were at the same volume levels, Van Hofwegen would drown her out with his choir boy’s falsetto, which rang out at a superfluously high amplification.

Structural issues aside, the music that Young and Sick ground out at the Riot Room last night couldn’t even hold the attention of the small crowd gathered to watch. The melodies lacked creativity and energy, and no one could be bothered to listen to the lyrics, seeing how lost they were between the unnecessarily competitive keyboards and the – cringe – strummed violin.

This was all quite a disappointment, considering how often Young and Sick is listed as “the band to watch” or the “next hype” by buzzy Internet blogs, which assumedly should know better. Perhaps Van Hofwegen should stick to his Internet music and leave the live stuff until he has a bit more practice with it.