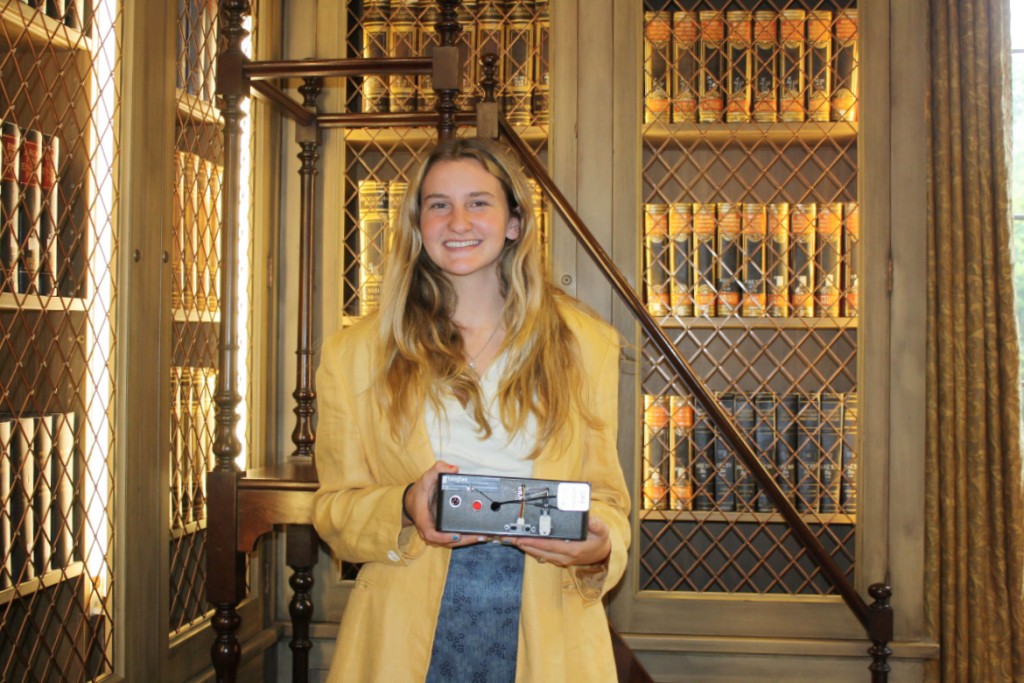 Kelly Ann Greene and the larger iteration of her invention, the Baby Saver. // Photo by Emily Standlee

Back in June, The Pitch spoke to several young inventors, including Kelly Ann Greene, who designed a mechanism called the Baby Saver. The device is built to detect heatstroke in infants left in hot cars. On August 20, Greene will discover whether her lifesaver of a creation picked up another prize at the Invention Convention Worldwide Globals competition.

When we first spoke, Greene was preparing for the U.S. Nationals portion of the Invention Convention, a K-12 program that operates in collaboration with the Henry Ford Museum of American Innovation in Dearborn, Michigan. The Convention teaches students critical thinking and problem-solving skills, and ultimately, they become more confident entrepreneurs.

One would assume the largest city in Missouri would have a ton of STEM-related opportunities for young inventors, but the Linda Hall Library—located on the University of Missouri-Kansas City campus—noticed a gap in resources and partnered with Henry Ford and the Convention.

“Science fairs and these types of programs are obviously very valuable,” says Samantha Hollingsworth, public programs manager for the library. “But the Invention Convention is unique because it’s a long-term, ongoing learning experience. The library provides free STEM and invention curriculum to educators. It all begins in the classroom.”

Students start with the basics: ‘What is an invention?’ ‘How do you develop an idea?’ Those questions turn into discussions on marketability, value, and what makes an invention stand out.

“After that Convention year is over,” says Hollingsworth, “students can take the feedback they got from judges, innovate on it, and present it again.”

The point is to stimulate a start-up experience. Inventions are reevaluated and brought back to the table with improvements.

“Imagine starting in fourth grade with an idea and going the whole way through,” says Hollingsworth.

What’s more, the library recently announced a partnership with KC Tech Council that would bring greater visibility to women in STEM.

“As cultural and educational organizations emphasize matters of diversity, equity, and inclusion, the time to bring the history of women in science to the forefront could not be more appropriate,” says Lisa Browar, President of the Linda Hall Library. 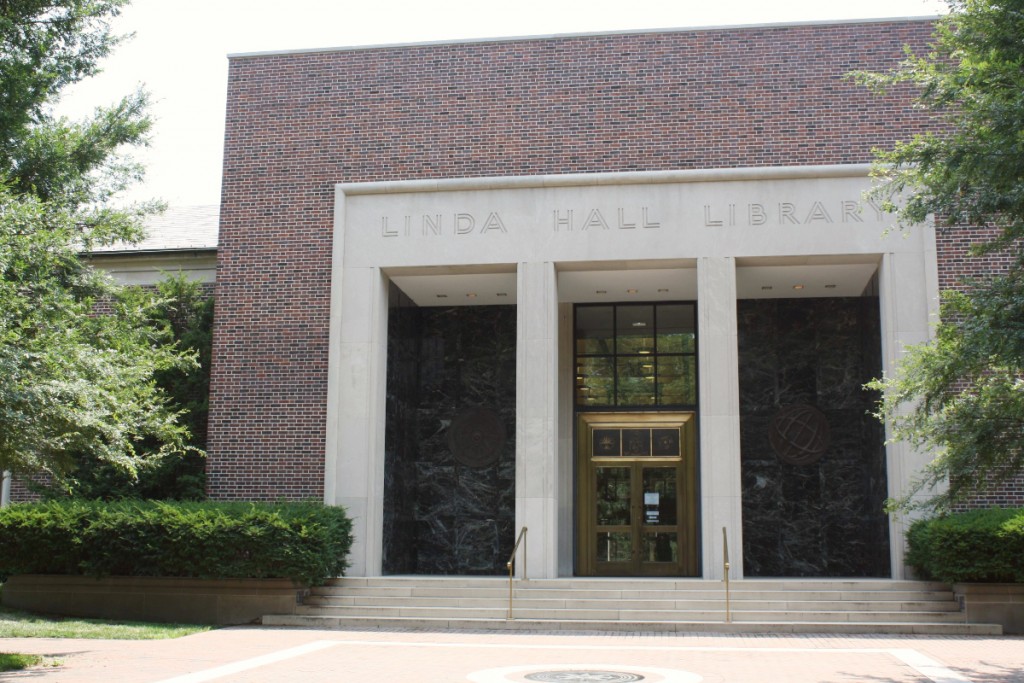 Kelly Ann Greene is proof women in STEM will save the world.

Since that initial interview, she’s kind of become a big deal—or maybe she was always a big deal. Her parents certainly think so. And Greene is exceptionally humble, if excited, about her recent winnings.

Greene’s Baby Saver invention took home a Market Potential award at the nationals competition. So, she’s been prepping for Globals.

“My inspiration started back when I was a freshman in high school,” Greene says. “I was given an assignment to create a device that solved a problem in the world. For that, I came up with a monitor that could detect heatstroke in infants who have been left in hot cars.”

Greene heard a story a few days previous in which an infant had perished by being left in a car, and took it to heart.

“The device goes on the baby’s car seat and has a proximity sensor [that knows] the baby’s in there,” she says. “It turns on and begins taking vital signs like temperature, blood oxygen levels, and heart rate. If those ever reach a degree that becomes dangerous for the baby, the invention alerts authorities and parents with the baby’s GPS location.”

In her senior year, Greene’s dad told her about the Invention Convention and its relationship with the Linda Hall Library.

“The Convention felt like a real opportunity to potentially get exposure, and the library helped get my ideas across,” she says. 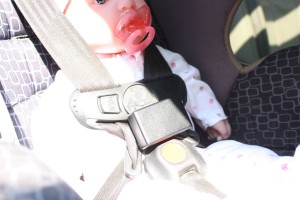 A smaller version of the Baby Saver, with baby for size. // Photo by Emily Standlee

After coming in second at the local Kansas City competition, Greene headed to nationals, where she nabbed that coveted Market Potential award. The next step is introducing crowdfunding as an aid in the creation of a smaller prototype that could better fit in a car seat.

After that, she says she’ll begin the marketing process or sell the device to a car seat manufacturer, since the Baby Saver would go in the straps or buckle. She’s even considered adding a 3D printed color-changing filament, but as components are added, the size of the invention increases. Smaller products have heftier price tags.

The Baby Saver is distinct in that it keeps in mind a parent’s potential forgetfulness. Parents must remember to replace the battery, but the device itself is designed to be operational if it senses something in the car seat in the first place.

The Baby Saver takes recollection, of lack thereof, out of the equation.

“Forgetfulness causes a large majority of the deaths that occur in cars,” Greene explains. “When I was doing research on obtaining a patent, I read stories of children who had died from being abandoned in cars on accident. It completely eats the parents away. So while the Baby Saver is meant to save an infant, I think it also saves a parent from having to deal with that grief and trauma and loss.”

“You put it on and don’t have to worry about it again,” her mom adds. “It would be foolproof.” 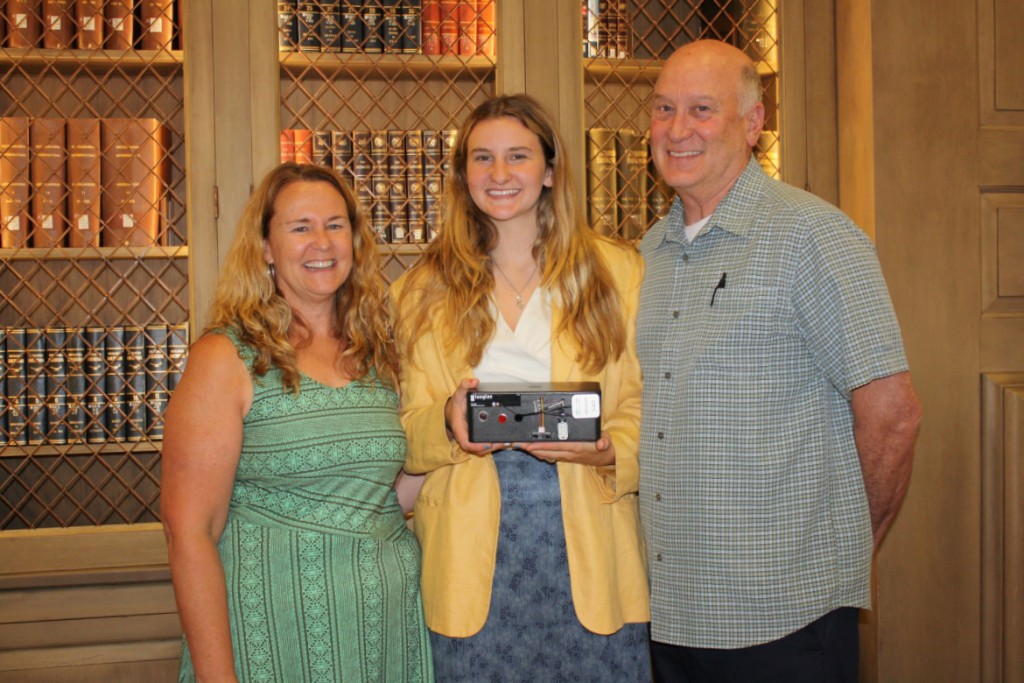 The Greene family in the Linda Hall Library this summer. // Photo by Emily Standlee

This year’s virtual Globals competition is made up of selected finalists from participating Nationals programs in the U.S., Mexico, Singapore, and China. It features at least 120 inventions, including the Baby Saver.

“I’ll be in college by [August 20], so I’ll have to watch [the awards] by myself in my dorm room,” says Greene. “I’m going to the University of California-Santa Cruz.”

“California is so far away,” says her mom. “She’ll be playing volleyball.”

Later Greene’s dad will mention the UC Santa Cruz mascot—a banana slug—and the room will erupt in giggles. “Part of her criteria for college selection was Best Mascot,” he jokes.

“We’re just along for the ride,” Greene’s parents say. “We’re very proud of her.”

“I couldn’t have done it without you,” Greene says.