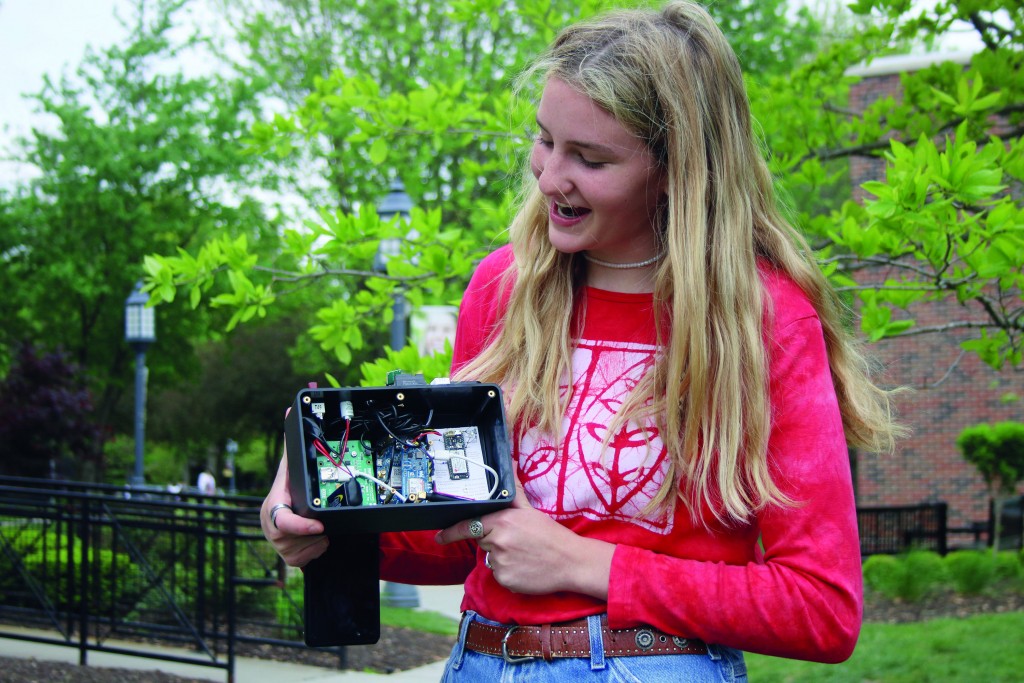 Kelly Ann Greene, who just graduated from St. Teresa’s Academy, took second place with her Baby Saver invention, which monitors vital signs of children in car seats and sends alerts to make sure no one is left unattended in a hot car. // Photo by Beth Lipoff

Move over, Thomas Edison. A whole crop of young Kansas City inventors is gathering steam (or is that STEM?) with the Invention Convention competition held by the Linda Hall Library. This is the first year this national program has made it to the metro area.

“The library was interested in becoming involved in the STEM ecosystem in Kansas City,” says Eric Ward, vice president of public programs for the library. “There are a lot of STEM organizations doing great work in the city, and we didn’t want to duplicate anything that other organizations are doing.”

Invention Convention is a program of the Henry Ford Museum of American Innovation. The Linda Hall Library became an affiliate of theirs to participate, which is already a Patent and Trademark Resource Center and helps people doing intellectual property research.

For Invention Convention, that’s a key step. To qualify, projects must not be something that is already patented or available on the market, but they should solve a problem or issue.

Students keep track of all their efforts—what worked and what didn’t—and present their idea with all the research to back it up. Although they have to have an original idea, their prototype doesn’t have to work in order to win. It’s more about the innovation process.

Local STEM professionals made themselves available, both as mentors and judges, for the contest.

The contest didn’t inspire Anthony Arquieta to create his invention—he’d already been working on it as a student at Blue Valley’s Center For Advanced Professional Studies—but it did give him an outlet to show off his creation. It paid off, and he took home the best of show title with a $2,500 scholarship and an $800 cash prize for his invention, the Pelokit. 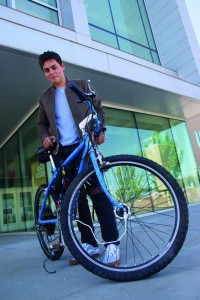 Blue Valley High School senior Anthony Arquieta won the best in show award for his invention, the Pelokit. It charges the battery on an ebike while you’re riding it. // Photo by Beth Lipoff

His Pelokit takes the energy generated by a bike cruising fast down a hill and cycles it back into the ebike battery using a hub generator attached to the front wheel and connected to the ebike machinery.

Creating new equipment and modifying his own kit was an interesting experience.

“I’ve never torn into my own bikes. I had to learn how to lace things into spokes and do all these different things I had never done, including taking off my crankshaft petals. I spent a lot of time in the lab just trying to configure things,” he says.

Arquieta ordered better parts to enhance his inventions and boost the amount of energy it’s able to cycle back into the battery before the national competition. He’s hoping to eventually get enough to make the battery last 25% longer.

Like Arquieta, 17-year-old Kelly Ann Greene had already started working on her invention, the Baby Saver, as a freshman. Long before she heard about the contest. Her inspiration came from a news story about a child left in a hot car.

“I really like just being able to potentially help someone,” says Greene, who just graduated from St. Teresa’s Academy. “Just having that idea and that motivation makes it really rewarding (to know) that possibly one day this invention could save a baby’s life.”

The Baby Saver can detect if a child is in his or her car seat and monitors temperature, pulse, and other vital signs. If it senses these spiking into dangerous levels, its connected app sends an alert with a GPS signal to both the parents and emergency services.

Greene has already obtained a provisional patent, though she’s still refining her design.

“It’s pretty clunky right now. It’s about the size of maybe a big mug,” Greene says. “It’s pretty large right now just because the parts I used for it are the basic building parts from Amazon, such as a Raspberry Pi unit with extensions.”

When Lakewood Middle School students Madhava Bhadriraju and Declan Adair learned how difficult it can be to get clean water in the developing countries they were studying at school, they wanted to do something about it.

They were especially concerned about the high cost of water filters and decided to make something easy to carry that filtered bacteria and viruses from water, but wasn’t out of range monetarily.

“Water filters on the market, they don’t filter waterborne viruses. Our filter, it does, because it uses activated carbon which filters waterborne viruses at 0.5 microns,” Bhadriraju says. “Most small handheld filters have a plastic membrane with microscopic holes, and that can filter bacteria but not viruses.” 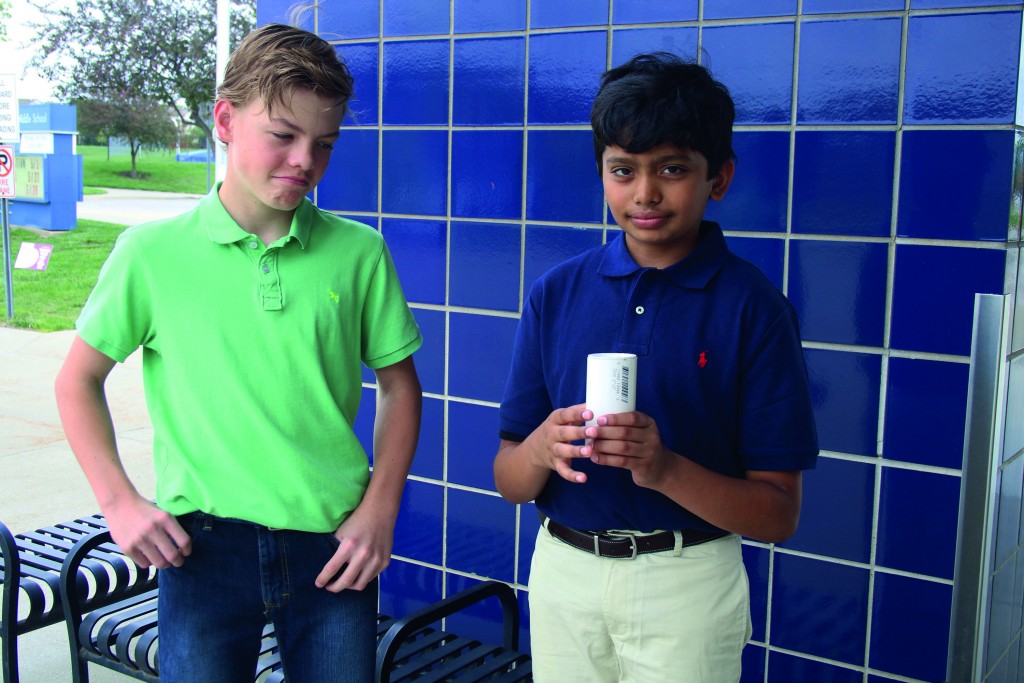 Bhadriraju figures their creation costs about $1 per unit as opposed to the $20 other filters cost.

Developing it wasn’t all smooth sailing—but that’s how it goes with innovation.

“We started out with powdered charcoal, and that would make the water black. We went to the carbon. We tried many different things until we found which one worked,” Adair says.

With the contest open to the entire metro area—covering 17 counties from Douglas to Bates—23 students from six schools entered 12 projects in the competition. These numbers are on par with what Ward expected for Kansas City’s first year in the program. Results from the national competition, which is virtual this year, will be released June 24.