Yacht set the earth on fire at RecordBar last night 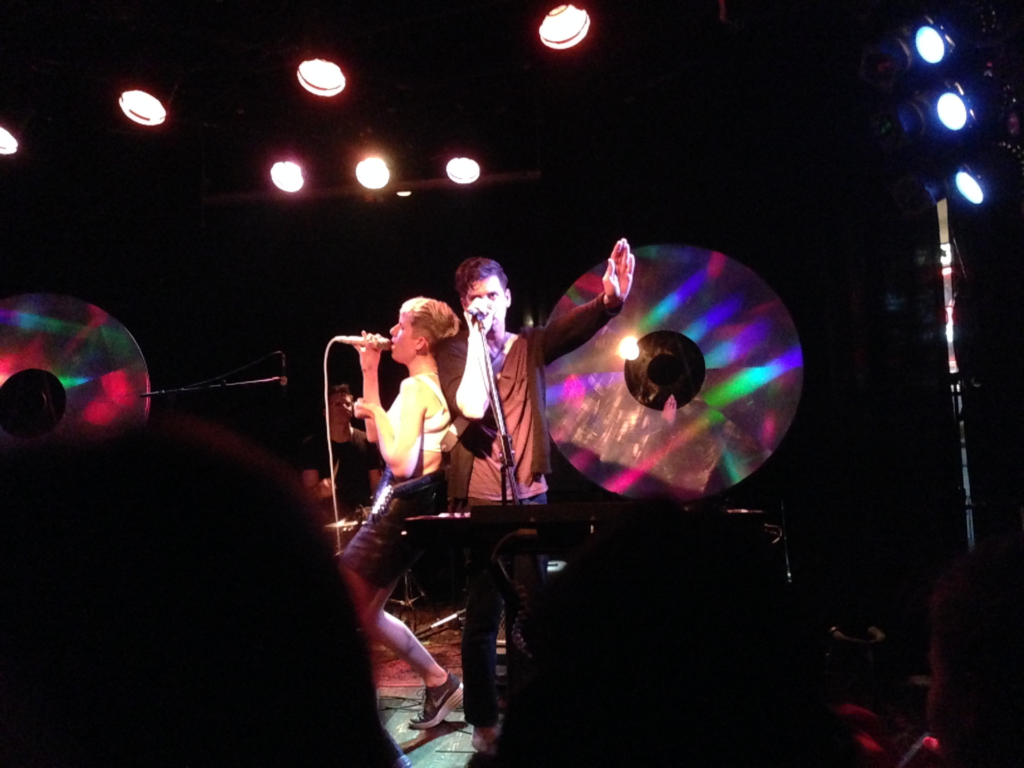 Here’s one way to score a closing slot — just don’t show up for your band’s opening gig.

With White Fang yet to arrive at the building and the night not getting any younger, Yacht went on around 10:45. (We were told van trouble was the culprit.) The stage darkened, and a disclaimer played. Among other warnings, the crowd was warned not to make eye contact with the rhythm section.

The stage lights came on, and Yacht vocalist Claire L. Evans appeared in a black sweatshirt that read “Tomboy” for Yacht’s first show in Kansas City and the second night of the tour. Two monster discs stood at the back of the stage. Later, Evans would use one for a quick primp. Say what you will about vinyl, but you can’t fix your hair staring at a record. (It’s even harder with a cassingle, a format in which you could buy “Psychic Soul,” Yacht’s latest, over at the merch table.)

From the first few pulses of Yacht’s future rock disco straight through the non-encore, Evans had the crowd in the palm of her hand. Taking a perch at the lip of the stage, she was all angular dance moves and smiles — at some point before the night was over she looked every single one of us right in the eye. 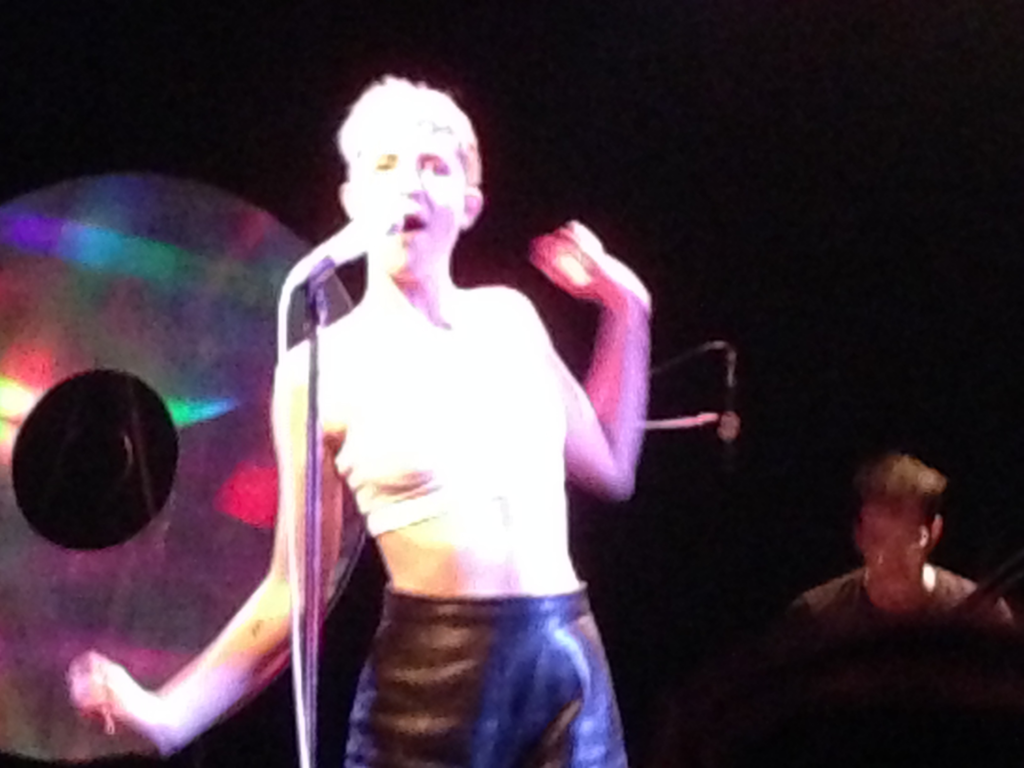 When a speaker gave her mic some feedback, Evans playfully stared it down. There was so much dancing with arms being waved to and fro, I’m surprised I didn’t catch an elbow to the glasses, especially when Evans shed her hoodie and came down into the audience during “The Afterlife.” It was a total pogo frenzy.

Meanwhile, the rest of the band was in all black, with main Yachter Jona Bechtolt ending “Beam Me Up” with a knob twiddling keyboard freakout. A couple of songs later he launched into a new one with a bit of false start. “You fucked it up?” Evans asked Bechtolt. “That’s how new it is.” 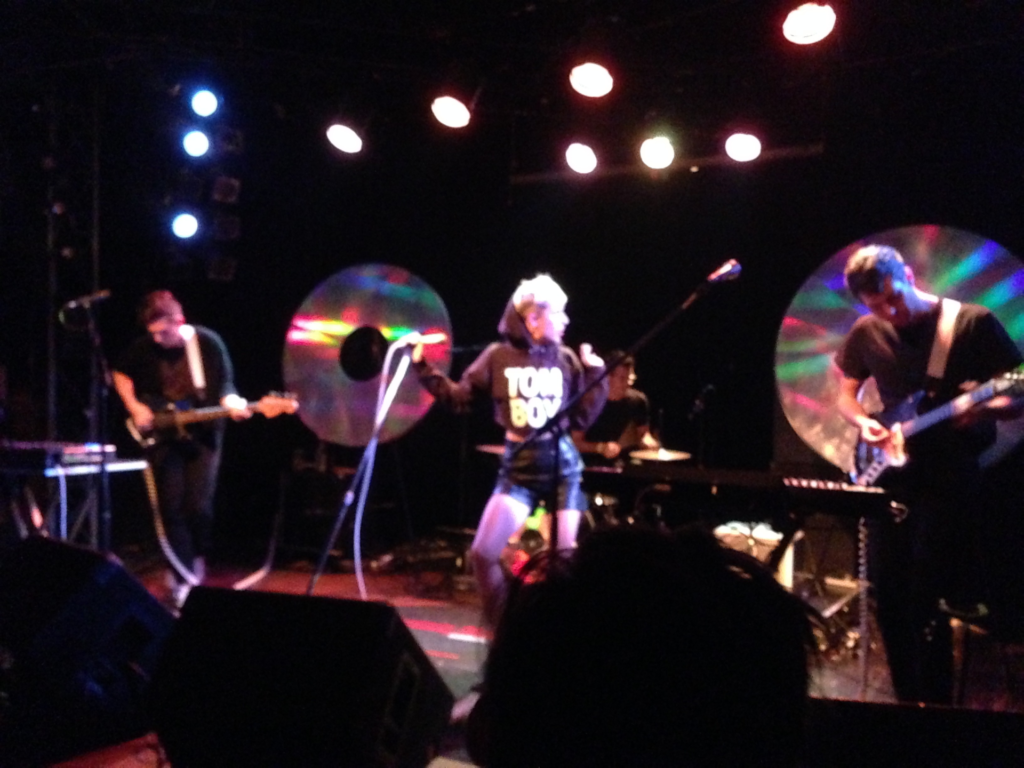 Between songs, Evans engaged the audience in some Q&A. “Is the earth on fire?” someone yelled.

“How convenient you should ask. That’s actually the parenthetical of the next song,” Evans replied, launching into “Dystopia (The Earth is on Fire).” We don’t have no daughter/let the motherfucker burn, she sang.

Alas, her mic crapped out for part of “Dystopia” while the backing tracks played on. The audience was more than happy to sing Evans’ part as she remedied the situation. Still, the glitch makes one wonder how much is actually happening live on stage, especially when despite the booming beats, drummer Jeffrey Brodsky didn’t seem to have much to do on his super tiny kit during “Psychic City.” (Although he was an animal up there for most of the set.)

Not that anybody seemed to care. For sure not the satin-jacketed fan that sneaked up the side of the stage to jam with Evans during “Le Goudron.” 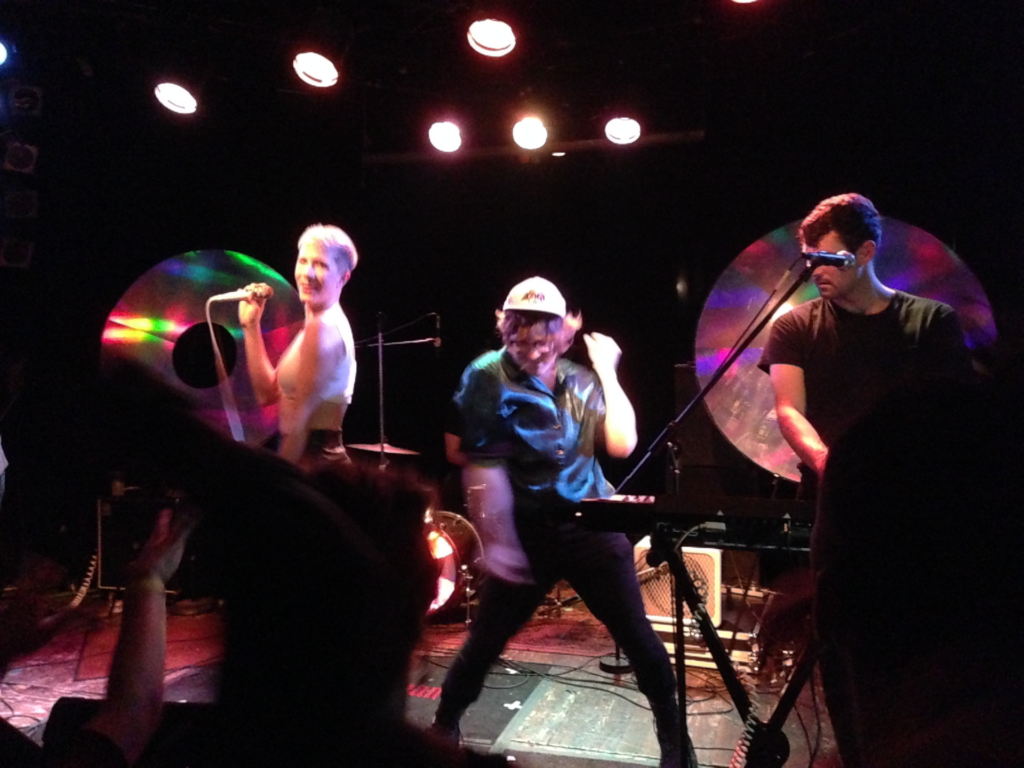 Rather than take a break following new single “Where Does This Disco?” Yacht went straight to the encore. After an extended go through “Utopia” with its liquid bass line, Bechtolt promised the audience we were about to have our minds blown by White Fang, who had at last arrived during Yacht’s set.

When White Fang finally arrived, they were a total shitshow in the best possible way. They were the polar opposite of Yacht’s technical precision, except for how they were able to make an instant connection with the crowd, most of which had stuck around.

Playing ‘80s metal sludge punk with shirtless majesty and guts akimbo, White Fang seemed set on proving that rock is not pretty. Frontman Eric “Rikky” Gage’s go-to move is to put the mic to his belly and let his stomach do the talking. 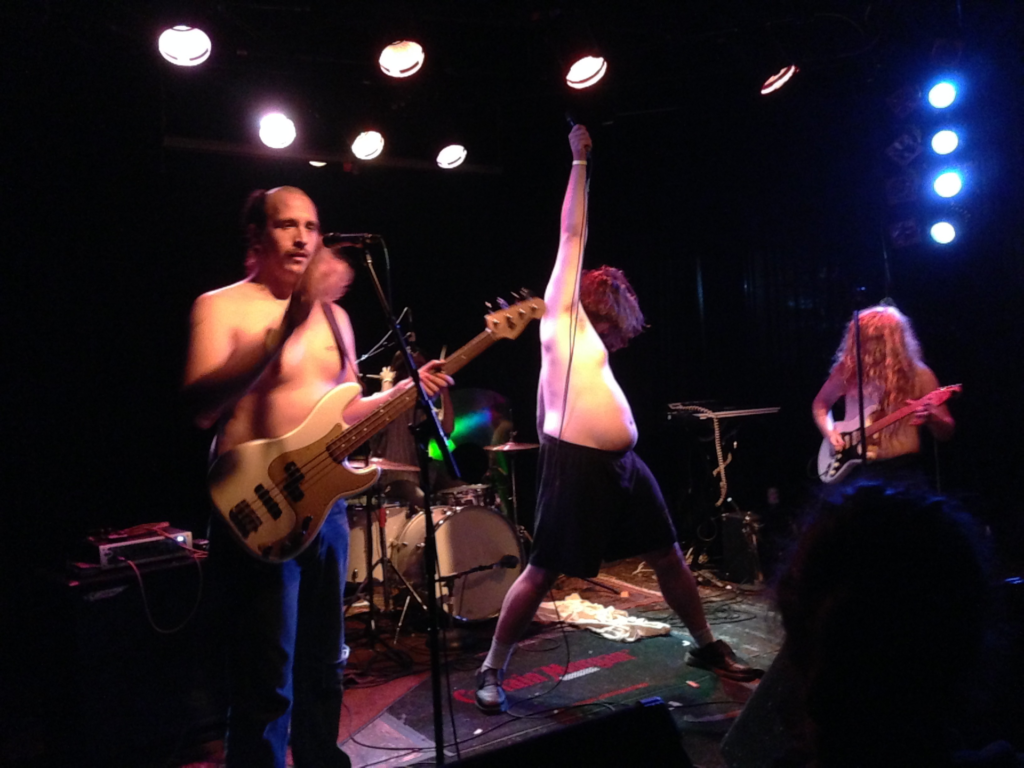 “Bring us a shot!” bassist Unkle Funkle chanted, and it worked a surprising number of times. There were also drinks thrown at the band, slam dancing and an honest to goodness pit. Plus a full moon by Gage.

During the next-to-last song, Gage revved up like a bull locking eyes with guitarist Kyle aka Fuzz Puddle aka Cinnamon Bear as he violently shook his head no, realizing the assault he was imminently in store for. Then Gage let loose and flipped his bandmate over his back — breaking his guitar.

And just when they stopped and you thought it was over, Gage counted off 1-2-3-4 and White Fang played “Bud Light” again. One time they played it kind of ska. One time instead of singing the words, Gage honked like a goose. They played it over and over and over.

Bud Light and a Yacht — not a bad way to spend a Monday.

Leftovers:
RecordBar impressario Steven Tulipana tweeted earlier in the night he was excited to see Yacht and that, “I hear we have some celebrities in the house too.” I didn’t see any, but there was a dude dressed in head-to-toe spaceman silver, so that’s something.

Yacht’s set list (approximate, please leave corrections in the comments):
I Believe In You (?)
Beam Me Up
The Afterlife
I Walked Alone
?? New song ??
Psychic City (Voodoo City)
Dystopia (The Earth is on Fire)
Plastic Soul
Second Summer
Le Goudron
Where Does This Disco?
Paradise Engineering
Utopia