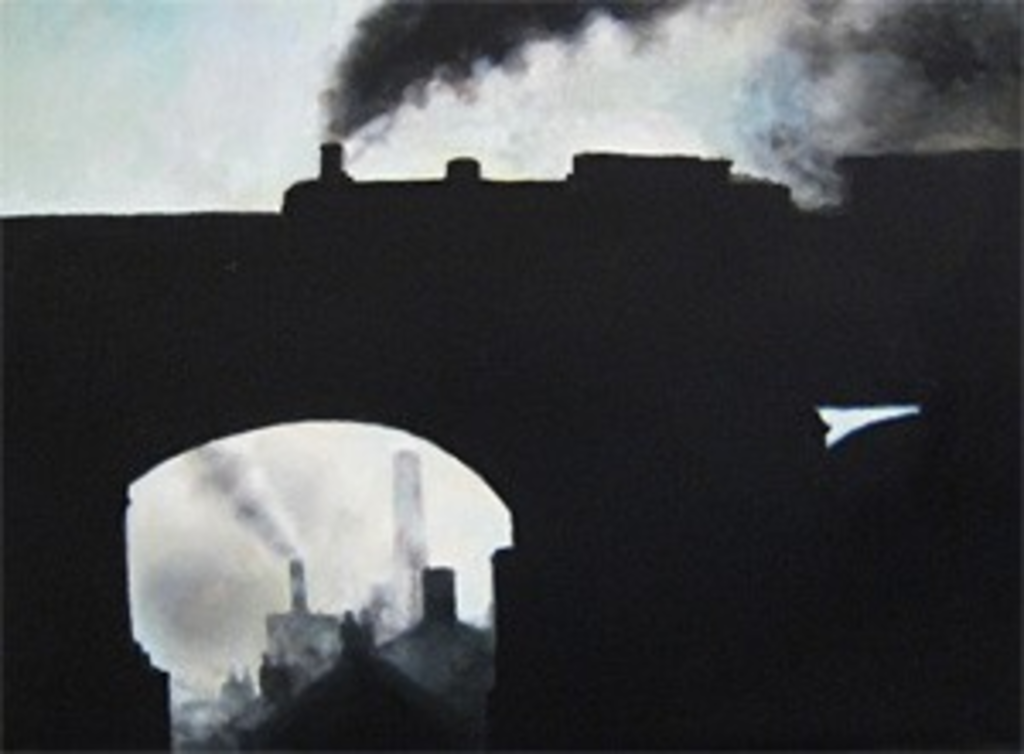 Lawrence Gipe‘s heady work emerges from propaganda, advertising, commercial and historical photography, newspapers and other ephemera. The Santa Barbara, California, artist understands the pervasiveness of any large political or ideological movement, from the Hudson River Valley painters’ romantic fascination with the land to the oppressive totalitarian imagery found in Nazi photographs and posters. Gipe knows that such images attempt to create a collective point of view. By painting them, Gipe reclaims them.

Because his paintings also traffic in beauty, Gipe acknowledges what any good propagandist knows: Beauty is a mighty persuasive and powerful tool. We don’t listen to Brad Pitt’s exegesis on how to fix New Orleans because he’s a genius or an acknowledged expert in the field of urban planning. We do it because he’s pretty. And Pitt knows that we know this; we’re all complicit in this political gambit because we believe it’s for the greater good. But the question is, who determines the greater good? And therein lies the danger in manipulative imagery.

The 10 small paintings in Gipe’s exhibition at Byron Cohen are from a series titled Arrivals and Departures, the sources for which are mostly photographs of trains and planes. To the title of each painting, Gipe adds a parenthetical note such as “Berlin, Germany, 1946” or “Turkey, 1947,” helping us understand the images differently than we would without the political and historical references — the dates give the works a sinister edge. In “Panel No. 9 From Arrivals and Departures (Berlin, Germany, 1946),” a black-silhouetted train steams across a bridge, smoke billowing from its stack while — in the distance, through one of the bridge’s arches — we see smoke spewing from another stack. The painting feels shrouded in darkness, but even the portion that’s lit is suffused with this menacing smoke. It takes little imagination to relate the smoke to concentration camps. In “Panel No. 8 From Arrivals and Departures (Turkey, 1947),” a line of men on horseback strings across the desert as if going to — or deserting — war. At the time, Turkey and Greece were struggling against communism; the Truman Doctrine, introduced in a speech that President Harry Truman gave that year, pledged assistance. Other images of planes with addenda such as “Korea, 1950” suggest the power and supremacy of aircraft during wartime; North Korea invaded South Korea that June, launching the United States into the Korean War.

Fortunately there’s some distance in the gallery between Gipe’s work and that of Allie Rex, a young artist and recent MFA graduate from Michigan’s Cranbrook Academy of Art. Now working in Brooklyn, New York, Rex creates decorative wall installations from painted Mylar cutouts. Pinned to the wall in layers and alone, these small, patterned snippets come in bright colors, including hot and light pinks and blue and yellow. “Where Does It Come From, Where Does It Go #1” is made of layered scalloped shapes with small fragments that seem to be escaping from the main piece. Another piece is made up of tiny heart cutouts pinned to the wall. These candy-colored confections constitute a good beginning for this young artist — they suggest her understanding of spatial relationships, though she still lacks the contextual weight of more experienced artists such as Polly Apfelbaum and Jim Hodges, whose works emerge from popular culture and, for Hodges, personal histories.

But it bothers me that Rex and Gipe share this gallery space because each is so wildly different in experience and artistic practice. The juxtaposition dilutes rather than complements each artist’s work and requires viewers to make a jarring and nonsensical shift. Not all artists’ works exhibit together well, nor should they.