Working Out with Red Dog and Punkin’ 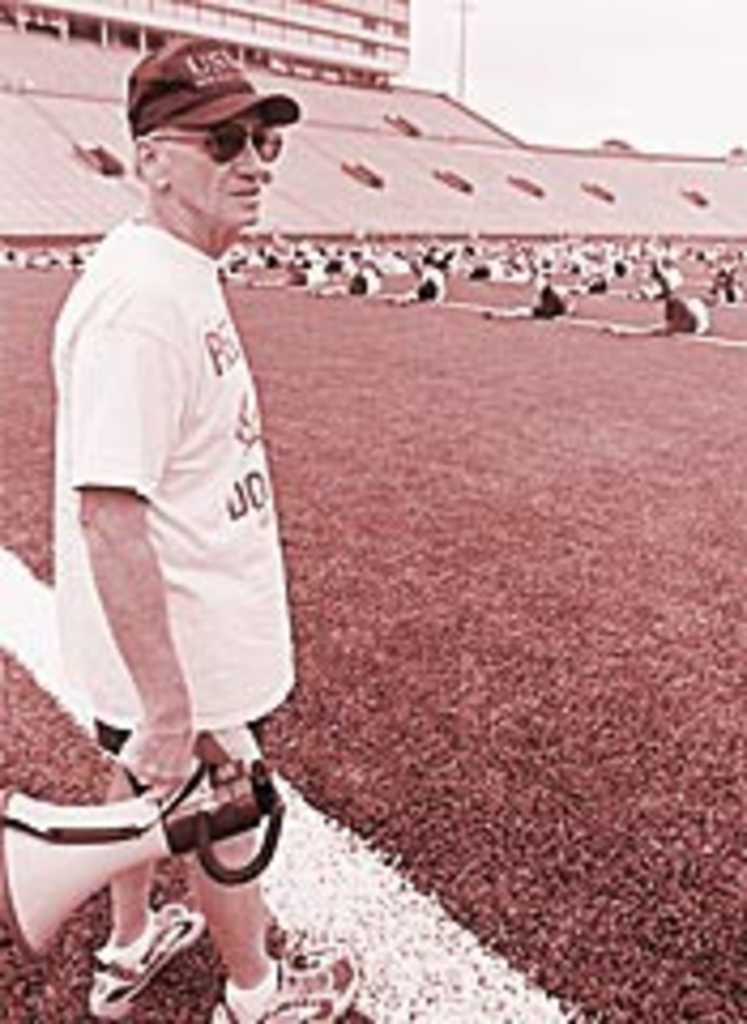 As the 12th chime of the Campanile echoes throughout Mount Oread, ringing in the noon hour, another sound familiar to those who frequent the University of Kansas campus on summer afternoons commences: the din of Don Gardner’s bullhorn as he leads yet another grueling midday workout at Memorial Stadium.

“Two laps, let’s go!” Gardner barks through the bullhorn, and, in the blink of an eye, 300 bodies take off in unison for a quick trip around the parking lot.

The 61-year-old ex-Marine (known as Red Dog for some 50 years) started “Red Dog’s Dog Days” back in 1984 in hopes of keeping Lawrence High School football players in better shape during the off-season. Never in his wildest dreams did Gardner think the crowd would grow so large, but now more than 300 people (from high school athletes to police officers) show up at each of the 45-minute workouts, held nearly every day at noon and 6 p.m.

Maybe it’s because Gardner is always prodding, always pushing, and occasionally mixing in a swear word or two to get the most from every person out there. “Run hard!” he barks at a pair of basketball players who have slowed to a trot as they hit the multi-tier ramps inside the football stadium. “Sometimes they get pissed at me, but they know I’m right,” Gardner says.

And the only cost of the workouts is a little blood, sweat, tears, and perhaps your lunch if it’s a particularly sweltering day. “People think we’re crazy ’cause we don’t charge. But this way if we don’t like what they’re doin’, then we say, ‘Leave.’ I’m not trying to be hardcore, but we’re just as much for the skinny-legged guys as the big fat guys. We just want everybody to try. It doesn’t matter if you don’t go all out the whole time … just try.”

Gardner’s partner since the inception of Red Dog’s Dog Days 16 years ago is Jim O’Connell, a man known to virtually everyone as Punkin’ (“I was born on Halloween,” he says). The two worked as trainers for the Lawrence High Lions football team starting in the late 1970s, and as the years wore on, they grew tired of the ticky-tack injuries that plagued players at the onset of each season.

“We’d have to go on the field a lot for cramps and stuff, so we thought, ‘Let’s get this goin’,'” says Gardner, “and right after that, we didn’t have as many guys go down with cramps. Even with kids who were hurt, they’d get up and get back goin’ quicker.”

The first couple of years, Lawrence High hosted Red Dog’s Dog Days; then Gardner used some KU connections to move the workouts to Memorial Stadium, where they found a permanent home and an even stronger base of athletes.

“In 1989, we picked up some volleyball players, and from then on, it really started growing,” Gardner says. “We picked up a bunch of girls that were as good as the boys athletically. Then we got kids from other sports and started inviting parents. Then it really took off.”

The July sun can be cruel, and when it’s coupled with high humidity, things can turn unbearable even before participants run that first step. But as the beads of sweat drip down their faces, those gathered in the heat for the workout seem oddly jovial.

Lawrence Police detective Jack Cross, who’s been a Dog Days regular for more than five years, is one of about a dozen of the city’s boys in blue who make the workouts a part of their training routine. “It’s a challenge. You compete against yourself, and Red Dog gives you all the things you need to do to stay in shape that you wouldn’t normally do if you were out running by yourself,” says Cross. “Plus, with everybody else out here, you can kind of compete against them, but there’s not as much pressure.”

If the feeling of pride and accomplishment (not to mention the likelihood of a smaller waist size) isn’t enough of a reward for the workout’s regulars, Gardner and O’Connell hand out T-shirts to those who make it through 23 workouts over the summer. “It’s gotten so big, we’ve asked friends of ours who own businesses to donate, so that gets their name on a shirt and helps us out,” says O’Connell.

Red Dog’s Dog Days traditionally wrap up in early August, but in the past couple of years, Gardner has extended a smaller version of the workouts into the fall. Without the heat of the summer sun, however, the workouts lose a bit of their bite, and Gardner doubts Dog Days will ever become a year-round event.

After leading about 15 minutes’ worth of calisthenics and a final lap to close the workout, Red Dog barks his final words of encouragement into the megaphone and dismisses everyone for the day. The sweating masses take a moment to catch their breath and thank Gardner before resting up in preparation for another Dog Day.