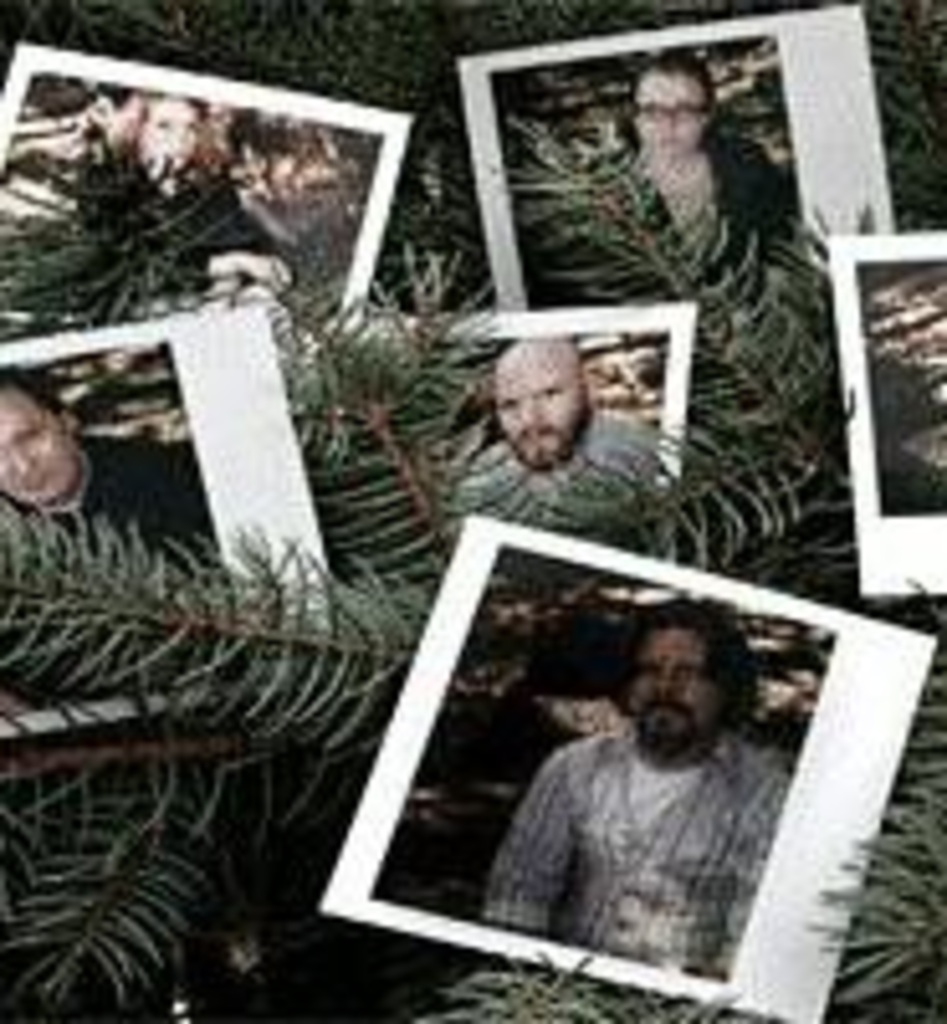 Click these links to hear the In the Pines songs Dress on Fire and Savannah.

The instrumental opener of In the Pines‘ new self-titled CD plays like a worker shoveling coal into the bowels of a steamship. It’s a slow, grinding tune, and it serves as a good introduction to a band that plays like everyone in it is covered in blood and soot.

But the music’s not the only thing that connects this Kansas City band to poor, toiling, dead Americans of the past.

There are the beards, highlighted by drummer Mike Myers’ triumphant, red General Sherman (he even has a profile in the “Beards of the World” section of the Web site Beards.org). And there are singer-guitarist Brad Hodgson’s bouts of infrequent bathing. (Hodgson smells fine now, but he admits he once went three months without a shower.)

The band’s mainly acoustic, minor-key arrangements (with strings played by Laurel Morgan on violin and Hannah Kendle on viola) and its communal approach to singing create a sound that wrings sadness and beauty from the same note without sacrificing demon-driven intensity.

“I loved the somber and sad [music] of the turn of the century,” Hodgson explains. “It’s really organic.”

That’s a word that Hodgson and his bandmates often use to describe their music, and it’s an appropriate way to pinpoint the Pines’ sound. Desolate and strange, the music has an earthy, emotionally wrought quality that shows a variety of influences. Turn-of-the-century folk, Leadbelly and Nirvana may not have much in common on first inspection, but the threads of good songwriting, narrative-driven lyrics and raw emotion that run through them also stitch together In the Pines.

The band members realize that In the Pines isn’t the first outfit to look to history for inspiration. Rather, they hope to be counted as part of a tradition that continues to be relevant.

The band’s name, for example, comes from Leadbelly’s “Where Did You Sleep Last Night?” That song came to the attention of a new generation when Nirvana covered it on MTV’s Unplugged. In fact, if a doomed Kurt Cobain hadn’t screamed the Leadbelly lyrics with such gut-tearing angst, the song may not have gotten so much attention. Likewise, In the Pines puts a modern spin on the music, building its songs into wailing frenzies live. It’s haunted and rural, but it’s closer to Dylan’s “ghosts of electricity” than to The Ghost of Tom Joad.

The Pines have been perking up ears for well over a year, with one Pitch Music Award and another nomination already in its pocket. So to describe the new album (out nationally on local label Second Nature) as long-awaited would be an understatement. The Americana-inspired lyrics, written mostly by Hodgson, are full of trains, suicide and war. Dread prevails over the songs, but the music also conveys hope and rebellion. As Hodgson puts it, “Desolation can be empowering. It’s about creating a balance of haunting and beauty.”

A highlight of the album is “Dress on Fire,” a waltz that tells the true story of Wight’s great-aunt, who immolated herself in her family’s field. Starting off slow and sad, the song bursts into a wildfire of hammered guitars and whiplike strings.

“Dress on Fire” is the only song that tells a true story. The rest of the album’s lyrics are inspired by historical events but come primarily from Hodgson’s imagination. “I had a history class that opened my eyes to a bunch of stories that haven’t been told in recent years,” he says.

The songs follow from the stories, not telling them directly but remaining steeped in lore. “Savannah” — the first song that Morgan and Hodgson wrote during the larval stage of the band four years ago — is a song of love and loss laden with yearning intensity. When I die, when I die, I’ll be a free man, that’s right, Hodgson sings. It may be the best encapsulation of the band’s sincerity.

Other highlights include the lyrically superb “For Love Instead,” which joins “Why” in asking tough questions that, like the music itself, are more concerned with evoking a mood than nailing down specifics. Who’s gonna fight for love instead? the band sings in a round, and the desperation of a battlefield and a bar seem to arise at once. Again, though, the sadness is tinged with a sense of solidarity. The question comes with a promise that, whatever the reason, there will be fighting.

Fights and fires leave their stamp all over In the Pines and its bruised and blackened music. Its power — electrical and emotional, immediate and raw — seems not to come from a switch or a plug but from a coal forge right up there on the stage.