With “Tinder Live,” comedian Lane Moore looks for a perfect match in each city 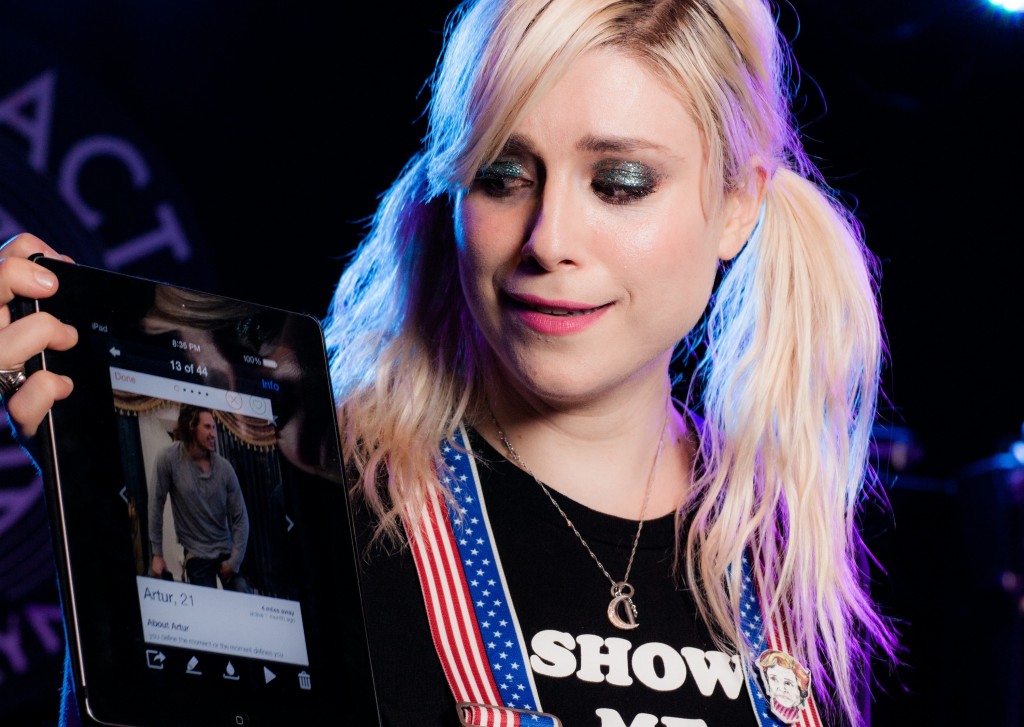 The grande dame you know and love as Missouri is spending her 200th birthday year pampered, petted, and fêted by folks right here at home as well as admirers from hither and yon.

One visitor from yon is comedian, writer, and musician Lane Moore who’ll be at the RecordBar August 11 with her show “Tinder Live.” In the set, Moore scrolls through her Tinder app in real time, viewable via a projection screen. The audience gets to vote on whether she should swipe left or right, and watch as she messages strangers.

Through touring, and viewing new cities through the lens of a dating app, she sees the United States much differently.

“I just have vague memories of going to Branson as a kid. Everything was western-themed, and the time zone was different. As a child that was very confusing when you’re trying to watch TV,” Moore says by phone from her home in Brooklyn.

Like someone claiming familiarity with an ethnic group outside her own, Moore adds, “My best friend is from St. Louis.”

For years, Moore has played cities in states that, unlike Missouri, she has no previous relationship with at all. States she wouldn’t even consider paying a birthday visit.

“Tinder Live,” the show she’s performed for about seven years, has turned out to be a great way to learn about a location. The show is improvised, but all based on the local Tinder accounts of the city she’s visiting.

Moore says, “Anyone who’s ever seen men’s profiles on dating apps knows that they’re just a carnival of insanity.”

The profile she logs into for the show isn’t quite a fake account, but it’s not completely true to her either; Moore had to veil her identity after people started recognizing her during the performance.

After she takes the stage, she pulls up the app on a big screen. She swipes until she finds someone on the outrageous side, then she starts communicating with him.

“My messages are as ridiculous as possible,” she says. “It’s totally improvised and being as weird as I possibly can.”

The men are typically very responsive to that weirdness—she thinks that’s because of the frustrating and lonely nature of dating apps. Her messages go far beyond the average, “Hi, how are you?” that app users have come to expect.

“Really, to have a conversation this funny and this strange is very rare, so I think it does bring this like, ‘finally’ for those people,” says Moore.

The show also tells her a great deal about the place itself. For instance, when she does the show in Washington, D.C., many of the men are in politics. But she has no idea what to expect of Kansas Citians.

“Is a fish photo really big there? Is there one place in town where everyone takes their profile photo?” she asks. “There’s always stuff like that, so it’s fun to discover what that is.”

Moore says the show is good-natured. She’s careful to monitor the energy of the man she’s messaging for signs that he isn’t into it. No one will be abused or teased mercilessly on her watch.

If “relationships” can count as a schtick, it’s hers.

Her biggest project other than “Tinder Live” is her 2018 book, *How to be Alone: If You Want To, and Even If You Don’t*. The book manages to be simultaneously hilarious and heartbreaking with chapter titles such as, “What If This Is as Good as It Will Ever Get: Settling and You!” and “All This Pain Must Be Worth It Because You’re Supposed to Be My Soul Mate.”

“With ‘Tinder Live,’ with everything I do, I really want people to have better relationships. I want people to connect more and feel less alone,” Moore says.

Audience members have told her they learn things from the show that actually help them find someone. While she’s sorting through profiles on stage, she’ll explain how a man’s representation of himself in a profile picture or a comment he makes to a woman might be interpreted as off-putting by the very people he wishes to attract.

Relationships with a city are simple in comparison. But what does Lane Moore look for in a place?

This is sounding familiar.

“That’s what makes it for me, is really good, kind people, really lovely food, lots of dogs, lots of nature stuff. That’s what I zero in on,” says Moore.

It looks like she and Missouri may be a match.

Categories: Culture
Tags: and even if you don’t, How to be Alone: If you want to, Lane More, the RecordBar, Tinder Live
Support Us