With Primary Color Music, a crew of local musicians hits the big time — in the world of advertising 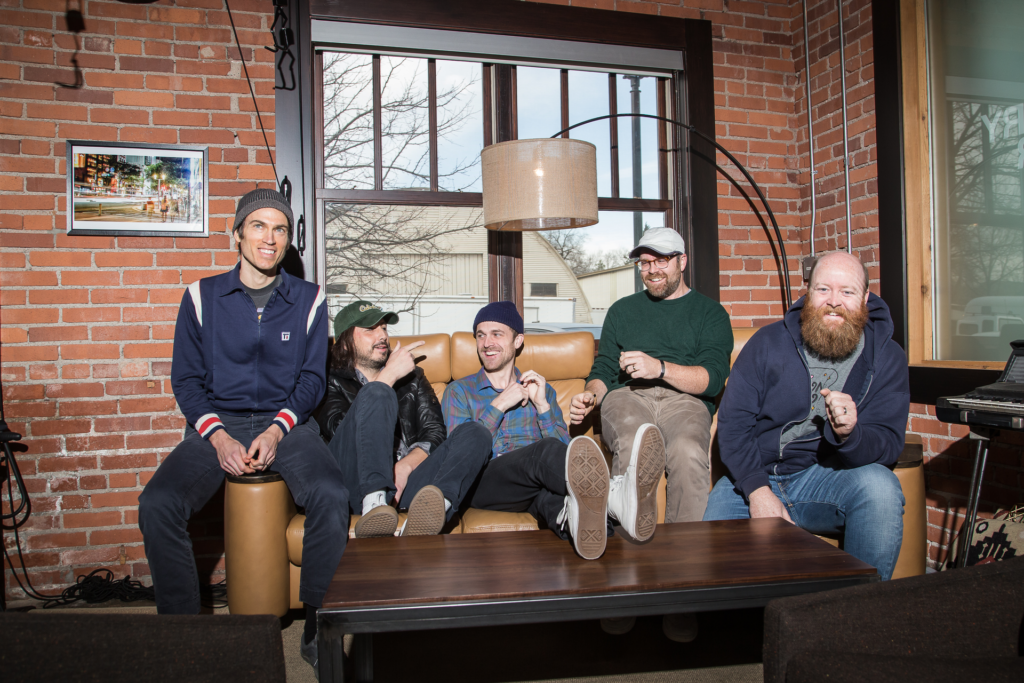 When Sam Billen started out in commercial music production, almost a decade ago, brands and ad agencies sought the expansive, cinematic grandeur of Coldplay and Sigur Rós. Later, the Black Keys’ neo-blues style fell into favor. Then the object was to replicate the M83 sound: big drums, big synths. Twee had taken its turn for a few years: glockenspiels, whistling, ukuleles. Billen can recall trap music’s moment, too, and he’ll tell you that “like Vampire Weekend” remains a common ask. Lately, he’s fielding lots of requests for frenzied dance-hall tracks — a phenomenon resulting from a successful Spike Jonze–directed perfume ad employing music in that style.

“Our job is basically to act like musical chameleons,” Billen says. “To come up with music that has the sensibility of what our clients are looking for, but that at the same time feels fresh and unique.”

“Which can be hard,” adds Billen’s brother, Dan, “because those ideas are kind of in opposition to each other.”

It’s late November, and Sam Billen’s company — Primary Color Music — has just wrapped its Monday-morning meeting, a weekly routine that now entails two employees Skyping from Japan into its Kansas headquarters. Primary Color keeps a small office here in east Lawrence, inside a former chicken hatchery that’s been given an industrial-chic renovation for the purposes of leasing space to just this flavor of startup. In the corner, Dan’s wife, Rosa, works in front of an iMac, and Sam, Dan and composer Josh Atkinson sit in comfy chairs, surrounded by musical equipment, tasteful rustic decor and, for reasons never fully explained, a life-size sculpture of a pizza slice dangling from the ceiling.

Most of the work produced by Primary Color Music occurs outside these walls. The five composers on staff at the company, which Sam founded in 2013, tend to work from home. The Billens and Atkinson are based in Lawrence. Ryan Pinkston works from Kansas City. Kosuke Anamizu, the latest addition to the team, contributes from Tokyo. Among them, they’ve written and recorded music you’ve almost certainly heard on a TV commercial, in a digital ad, blaring from a greeting card or a film or a video game. High-profile brands — Wendy’s, Garmin, Boulevard, Dairy Queen — have relied on Primary Color Music to score their American advertisements. Increasingly, this is also true in Asia, where the company recently opened a Tokyo office and is already scoring BMW and Toyota commercials and ads featuring famous Japanese actresses.

“We’ve all been in bands over the years, and we’ve all written music for our various bands, solo projects, whatever,” Sam Billen says. “And in those situations, the music is your baby, and nobody is allowed to touch it or critique it, because it’s your art. What we do now, it’s 100 percent the other way. We make stuff, and people just rip it to pieces. They come in and just tear it apart. But, weirdly, I have sort of learned to like that.”

When people ask Sam Billen what he does for a living and he tells them he makes commercial music, they usually assume he means jingles. Alas, that’s rarely the case.

“Jingles have kind of fallen out of favor in the industry, really,” he says. “I think I’ve only written maybe four jingles in all the time I’ve been doing this.”

But it is true that jingles run in the Billen blood. Sam and Dan’s father used to write jingles for local businesses in Oklahoma City, when they were growing up there in the late 1970s and early 1980s. (Country star Blake Shelton, who hails from Ada, Oklahoma, has cited one of Billen Sr.’s guitar-and-banjo songs — delivered in the commercial by an insurance-selling cowboy named Tall Paul — as youthful inspiration.) The Billen family eventually moved to Topeka, where Sam and Dan took up music themselves and eventually formed the Billions, a Lawrence indie-rock quartet that knocked around the Midwest from the late 1990s through the mid-2000s.

The dream of the musician’s life gradually gave way to more practical considerations, and the Billions hung it up around 2007. Sam, now 35, earned a master’s in English as a second language and started a family in Lawrence. Dan, now 39, found a job in advertising and settled with his wife and their children in Topeka. Sam continued to make and release music here and there, though: Christmas-themed albums with friends from Lawrence and KC, a 2012 solo record called Places.

“I always just wanted to be in my bedroom, recording songs,” he says. “To me, that’s the fun part. We toured with the Billions three or four times, and it really sucked. We’d come back completely broke, like, What are we doing with our lives?”

Given his father’s occupation, writing commercial music had always seemed like a potential career, or at least a source of occasional money. “It was always kind of in the back of my mind,” Sam says. “Dan and I would talk about it sometimes.”

Around 2009, Sam started talking with people — advertising folks, video-game companies, filmmakers — and offering his services. He drummed up some business scoring local films, writing snippets of music for websites and training videos. For about a year, he merged his services into a production company, where he became a partner and worked on projects for local corporations such as Hallmark, Capitol Federal and AMC Theatres. Then, in 2013, he again struck out on his own, with Primary Color Music. As new projects rolled in, he brought in Dan and Pinkston (whose band, the Republic Tigers, opened for the Billions at the 8th Street Taproom prior to appearing as a musical guest on David Letterman’s show in 2008) as full-time employees in 2015. After a seven-year stint in Japan, Atkinson, formerly of the local band Kelpie, moved back to Kansas in 2016 and soon came aboard as a composer. And in December, Primary Color added another former Republic Tiger, Justin Tricomi.

“I felt like, these guys are great musicians. Why is Dan cleaning parking lots — which is a job he had for a few years — and why is Ryan running tables at a restaurant?” Sam says. “If I can make a living at this, they should be able to, too.”

A through-line of the musical pasts of Primary Color Music composers is that they’ve all been involved in bands for which melody was an important component of the songs. Sam cites this as one of the company’s core strengths. “Just like lots of songwriters, we’re constantly making voice memos on our iPhones of melodies that pop into our heads,” he says. “We’re always working to nail down unique, appealing melodies.”

“But sometimes strong melodies are a distraction,” Dan Billen says. “A local car-dealership jingle — that’s kind of the epitome of what we don’t ever want to have to do. So, often, we go for more subliminal melodies, something more emotional and more in the subconscious.”

“Ultimately, it’s a collaboration with the client: You take the notes, you take the direction they give you,” Sam says. “The nice thing is, clients don’t tend to talk in music-talk. Which is good, because we don’t talk in music-talk, either. We’re not classically trained musicians. It’s more like advertising talk: a movie reference, or ‘I like the pensive nature of this,’ or whatever.”

“The process definitely pushes you in directions you wouldn’t normally go,” Atkinson adds.

“Which again, is cool to me,” Sam says. “I hate blues music. I think we all kind of do. But we have made blues songs through this company that we love.” 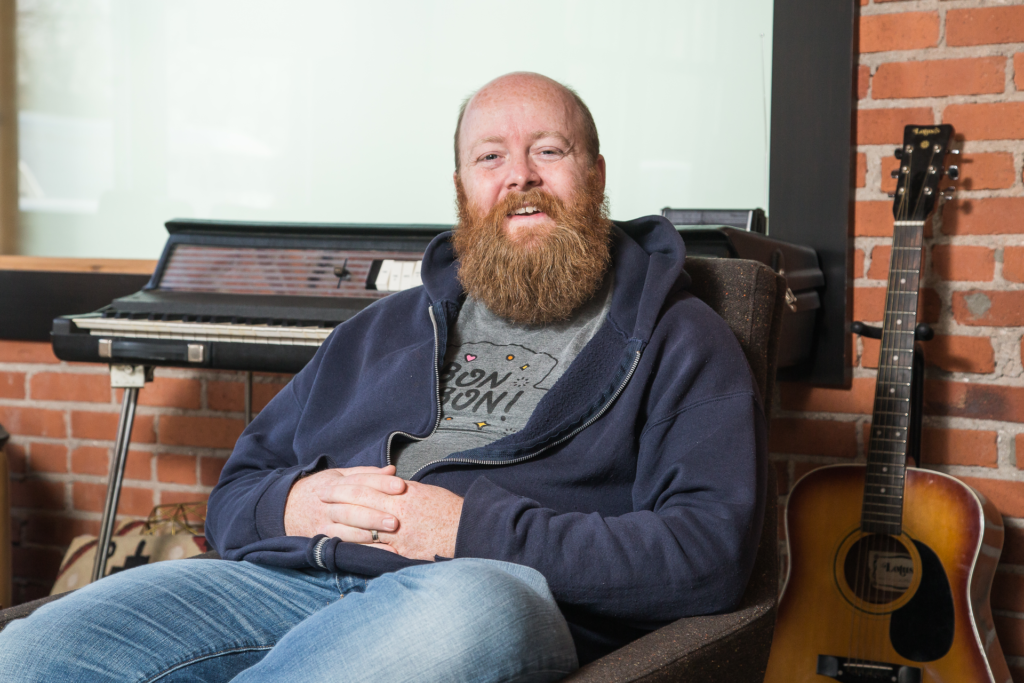 Japan looms large in Sam Billen’s personal and professional life. His wife, Yuka — also an employee of Primary Color Music — is Japanese, and they travel to the country regularly to visit her family.

A couple of years ago, as the business was starting to take off, he recalls wishing he lived closer to New York, the nerve center of the advertising industry, so that he could rub shoulders with the people doing big projects.

“Then I realized that a version of that exists in Tokyo, and that I should just start reaching out to people about work while I’m over there,” Sam says. “Plus, it’d be a good excuse to come back more.”

The plan is working. The Japanese side of the business has expanded rapidly, and Sam hired Anamizu to be the company’s Tokyo-based composer in January 2017. He also added Mina Kabeya-Moss, who worked in finance and accounting for Japanese advertising firms but who now lives in Lawrence and works from the office there.

“All our initial projects over there were the result of me forging genuine friendships with people over the years,” Sam says. “I mean, my wife’s Japanese, Josh’s wife is Japanese. People can look at us and see that we have a sincere appreciation for Japanese culture. As opposed to, you know, I’m coming over here to Japan to get me some of that Japanese money. ”

The flip side to this is that certain Japanese companies will hire Primary Color Music because it’s an American company that can produce what’s perceived to be an American sound.

“People sometimes ask me if the music we do in Japan is played in pentatonic scale or obscure keys or whatever, but that’s not it at all,” Sam says. “The music they [Japanese clients] are looking for is totally Western.”

To keep pace with new overseas business coming in, Sam and his family will travel to Japan this month and stay through June.

“Every time I go [to Japan], I feel like there’s this huge momentum, and I’m meeting more people every single time, but then it gets cut off, and I have to go back home,” he says. “So the plan this time is to give us enough time to make some deeper connections and train a couple people over there with the goal of establishing a mirror operation to what we do here in Lawrence.”

Back in the States, the crew will continue chipping away at various projects — there are about 20 in the pipeline at any given time, Sam says — and enjoying the small and often strange rewards of writing music heard by millions of people who have no idea who you are.

“It’s so weird, hearing your song while you’re standing in line at Dairy Queen or whatever,” Dan says. “You know that scene in That Thing You Do, where their song comes on the radio and they run through the streets? It’s like the opposite of that. You just have to kind of stare down and order your burger.”