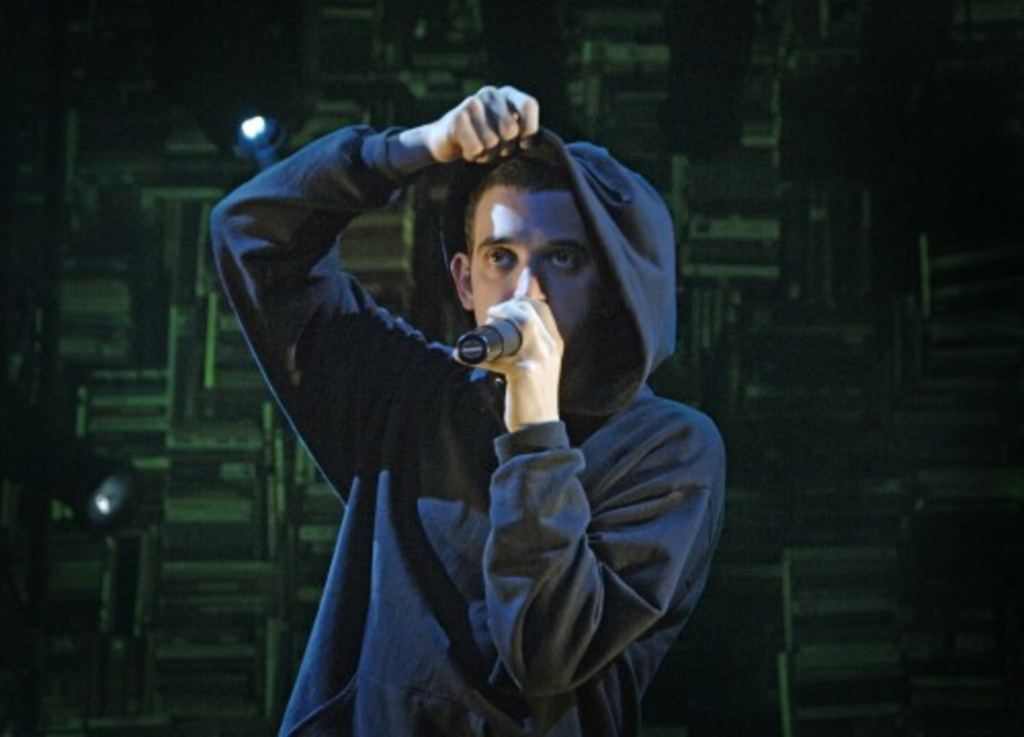 Finally, just a year after opening its new Copaken Stage, the Kansas City Repertory Theatre has mounted a show that feels like something new. If there was any doubt that Matt Sax’s earthy, funny, overwrought but mostly bumping one-man hip-hop musical Clay heralded a new age for our biggest (but rarely most vital) theater, that doubt wouldn’t have survived Sax’s demand, two minutes in, that the patrons of the arts “Make some motherfucking noise!”

To their credit, the patrons of the arts complied.

Better still, at about the halfway point, Sax beatboxed a quick history of hip-hop, nailing in spit and stutter a classic cut from Wu Tang Clan. He left the chant “Wu-Tang Clan ain’t —” unfinished, and a dozen or so heads in the crowd actually hollered back “— nothing to fuck with!”

Sax, who wrote and scored the show, is a lanky white boy with a golden tongue, some serious acting chops and an uncommon appeal. He’s also got balls. Shotgunning together hip-hop and upscale theater usually alienates two aesthetic communities at once. For the theater crowd, a commanding performance is enough. Rapping as Clay, a not-bad kid from a home more broken than most, Sax floored the Rep’s mostly older, white audience.

Convincing the street might be tougher. But listen: The dude’s an actor. Ragging on him for posing is like complaining that Sissy Spacek’s not really a coal miner’s daughter. What matters is that he kills that shit for 90 minutes.

Still, Sax is smart enough to skip the cheese at/G’s at rhymes in favor of what he could plausibly know: the development of an artist. Clay is a bildungsroman with beats. By pinching up his voice or throwing a quick hitch in his posture, Sax sketches the figures in Clay’s life: the dad who can’t be faithful, the mom who can’t be there, the hottie stepmom who catches teenage Clay without his pants on. He acts out some scenes, but the key ones he raps, often in character, over beats of his own design. (He favors ominous strings, mounting up in ascending loops, sweetened by R&B backup girls. The Rep should crank the bass.) The story is thin, even melodramatic, but it has an appealing raw humor and intelligence behind its outrageousness. Imagine Philip Roth writing 8 Mile.

Better still, imagine the Kansas City Repertory Theatre as what it should be: the home of vital, unpredictable art in Kansas City. My only real complaint is simple. When Clay-the-protegé has finally developed into Clay-the-MC, we don’t get nearly enough of his top-flight skills. He’d already reached the crowd. Now, that crowd was ready to be moved.

The title Clay refers to how life shapes and hardens us. A couple of lines refer to this, but Sax never makes too much of it. As the Actors Theatre of Kansas City closes out its excellent summer season, you might imagine that A Lesson From Aloes has its implications as well. What you might not suspect is that its characters deliver full-blown essays on aloes and their lessons. At one point, a wife denounces the aloes her husband has potted in the backyard of their South African home, even admitting to being frightened of them. “They’re turgid with violence, like everything else in this country,” she says, ridiculously, and then storms into the house looking for some calamine lotion. That’s what passes for a joke in this trying but somewhat rewarding drama by Athol Fugard: someone making the choice between aloe and calamine a matter of principle.

It’s too bad Fugard’s characters carry on so long working out his metaphors, because he’s built the play around a fascinating reunion. Piet Bezuidenhout (Gary Neal Johnson) is a white Afrikaner who years ago joined black protesters in a campaign against the South African police state. His friend Steve (Walter Coppage) has spent years jailed by the apartheid government and is now planning to leave the country. Piet’s wife, Gladys (Peggy Friesen), has suffered trauma at the hands of the police force. For the first time in years, we’re promised, the three of them will be coming together. When it finally happens and Piet discovers that Steve suspects him of having been an informant, A Lesson From Aloes seems every bit the powerful drama it should be. It’s a long time coming, though.

Director Bruce Roach and the actors do subtle, accomplished work, and Fugard’s script raises powerful questions about what it means to love a country filled with hate — and what it turns you into just to survive in such a place. But it’s such a slow burn, to a finale that only just pays off, that I can recommend this only to those theatergoers whose imaginations thrive in arid, turgid, violent conditions.