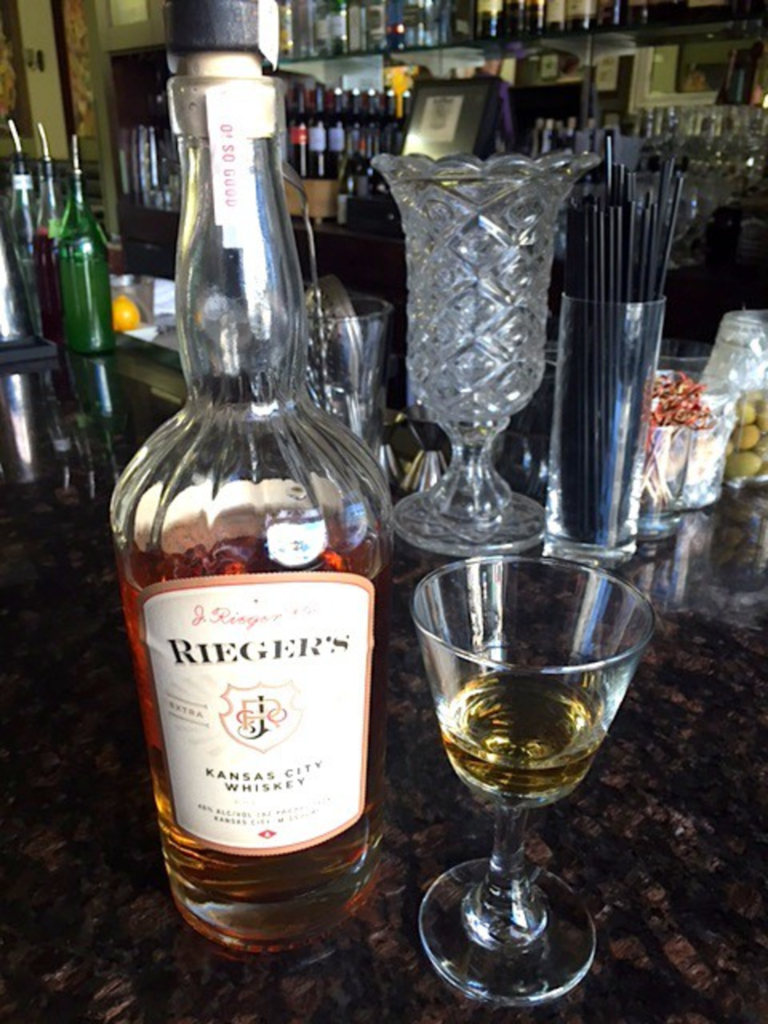 This week, Kansas City’s whiskey-loving population has a completely legitimate reason to spend a few hours imbibing after work: the introduction of the much-anticipated J. Rieger & Co. Whiskey. On Monday, Rieger’s Kansas City Whiskey hit local shelves and bars. Ryan Maybee, co-owner at the Rieger Hotel Grill & Exchange and its sublevel speakeasy, Manifesto, and co-founder of the resurrected J. Rieger & Co. label, says that to date, 58 local bars are carrying the product – and the number keeps rising.

“We just launched this week, so we’ve just started getting it distributed,” Maybee tells me over the phone.

Among the restaurants that are already carrying his product: the Corner Restaurant, Extra Virgin and the American. Gomer’s, Cellar Rat and the Underdog Wine Co., as well as several Hy-Vees, are also stocking the whiskey, for the reasonable retail cost of around $35 (for a 750 milliliter bottle). Within the next few weeks, by the holidays, Maybee hopes to have distribution on the Kansas side.

For Maybee, the Rieger’s Whiskey has been a long time coming. To make it all come together, Maybee partnered with Andy Rieger and took over the former Heim Brewery building in the East Bottoms, remarking the space into the new J. Rieger & Co. distillery.

“The decision happened about four years ago, when we were under construction at the restaurant,” Maybee says. “Being a big supporter of Kansas City history, I wanted to know more about the Rieger Hotel, but I didn’t know more than the fact it was built in 1915. Then I stumbled onto the J. Rieger Co. and Distillery, which was founded in the 1880s and was shut down during the Prohibition. I had no idea that existed, and it was kind of a revelation – like, ‘Oh, shit, I know what I have to do now.'”

So what makes Rieger’s Whiskey so special?

“Considering that it’s been gone since Prohibition, there’s nobody alive that remembers what it tastes like, so priority number one was making it taste good and putting a worthy product in the bottle,” Maybee says. “Then we wanted something unique and special, something that would stand out a bit. We researched whiskeys when J. Rieger and Co. was thriving, and we came across the fact that they used sherry in American whiskey back then, and that was another ‘aha!’ moment.”

Rieger’s Whiskey recipe uses a Spanish sherry, Olaroso. Maybee has been a longtime fan of sherry, he says, using it whenever he can in cocktail recipes. Including it in his whiskey seemed obvious.

“As far as I know, there’s not another brand or product that has sherry the way we have it,” Maybee says. “That’s another 1880s tribute.”

And how does Maybee envision his product being used? Does he have any rules for optimal enjoyment?

“The best way to appreciate it is to drink it however you want,” Maybee says. “I take great pride in making cocktails, but greater pride in making people happy. I drink it neat, out of the bottle, in shots. You can put ice in it or add a little water, because it’s higher proof at 92 percent. At the Rieger [Hotel Grill & Exchange], we use it in our horsefeather. Frankly, you can do whatever you want with it as long as you enjoy it.”

At the Rieger, general manager Tony Glamcevski pours me a sip of the tawny liquid. It’s light on the nose, with notes of caramel and hazelnut coming through. The taste is sophisticated, and even someone as whiskey-shy as I am can appreciate its smoothness. There’s a sweet finish – thanks to the sherry – that doesn’t linger but definitely encourages a second sip. It also feels malleable, like it would be a good fit in a host of cocktails.

“Most distilleries don’t include sherry in their recipes anymore, so that’s a really prominent flavor profile that I pick up on,” Glamcevski tells me. “I think it rounds out the edges and the harshness and the peat of a lot of whiskeys. I’ve been talking to a lot of people who have been tasting it throughout the week, and a lot of non-whiskey drinkers are actually saying that they like it because the rough edges are kind of smoothed out by the addition of the Olaroso sherry.”

According to Maybee, Rieger’s Whiskey is only the beginning.

“We definitely want to make sure we can fulfill demand in Kansas City before we attempt national distribution,” Maybee says. “It’s not going to happen right away. This is where we started, and it’s where we want to put the emphasis right now, but that is in the plans. We’ll have other products as well next year, too.”