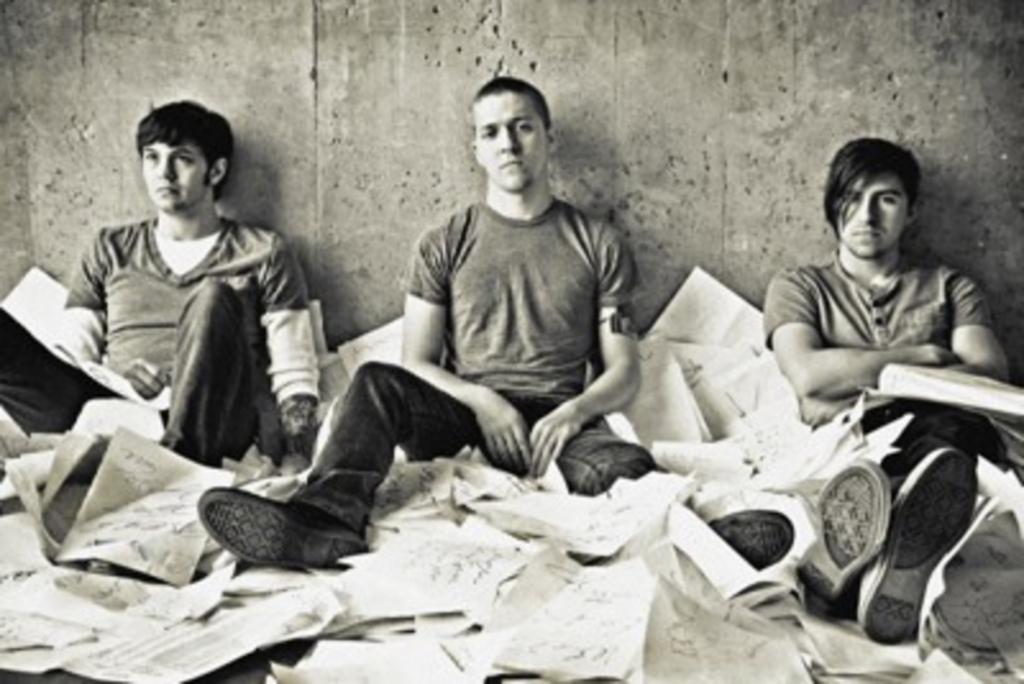 I’m wading through a sea of self-proclaimed virgins at the Rock the Light music festival at Starlight Theatre September 5. The first familiar face I see beams a 1,000-watt smile and issues an order: “Go to the Time Warner stage at 2:45!”

It’s Carson Land, the handsome blond frontman for the band with the most misleading name in Kansas City: Life in Jersey.

“Yeah, you should be there.”

He’s lying. When I make it over to the temporary performance area constructed as far as possible from the side stage where I’d been camping beneath a nylon shade, Land’s band isn’t playing. Instead, it’s his hyper, emo-rock friends Highland Fall, from Columbia. “We go on next,” a grinning Land assures me.

Land and his bandmates, bassist David Willey and drummer Beau-Gabriel Smith, have been crisscrossing the festival grounds all day, trying to drum up support for Life in Jersey and Highland Fall. In previous years, Life in Jersey marched around carrying giant signs bearing the band’s name — they say the tactic brought crowds of more than 1,000 and merch sales of more than a grand. But Rock the Light banned signs and handbills this year.

No matter. Life in Jersey is used to getting hassled by cops, security guards and even other bands for flagrant self-promotion.

“We have to create the hype,” Land will tell me a couple of weeks later over drinks at the Foundry.

Like more than a few Kansas City rock acts past and present, Life in Jersey struggles with its identity when it comes to rock bars and the religious arm of the music scene. The band recoils from the “Christian band” label, yet it’s just as willing to entertain a youth group as the RecordBar crowd. Land and Smith fit seamlessly into the latter, with their tattoo sleeves, affinity for beer, and the male coarseness that can creep into their conversations about women.

Yet, there’s an undeniable imprint of something sacred in their songs, and that’s what makes the band’s new album, Plotted Points, so interesting.

To a non-Christian tuning into songs inspired by someone else’s relationship with God, Land’s honesty as a songwriter is necessarily disarming.

Like similarly faith-affected songwriters in national acts Brand New and Thrice, Land openly addresses his mounting religious frustrations. If everything I’ve wanted you can tell/If everything I’ve doubted you can prove/If I owe everything to you/Why can’t you make me move? he pleads on the obvious single “A Sudden Change.”

“I’m trying to reconcile with growing up in a tradition of faith and the fact that I may not believe a single word of it,” he explains. “I never wanted to sound heavy-handed. I wanted [the album] just to ask a bunch of questions.”

The best part: Land doesn’t pretend to know all the answers. “I just wanted to leave it as — yeah, that’s life.”

Released officially last month, Plotted Points was the product of two months’ recording with producer J. Hall, whose touch is evident in the polished finish of a collection that ranges from quiet instrumentals to hooky guitar rock with hardcore traces. Blessed with a gravelly voice, Land can’t resist the occasional scream. Close listening reveals subtle aural cookies such as the sound of a dentist’s drill on one track.

“I want people to listen to our music the way I listen to music — poring over the production and the lyric book,” Land says.

Although Land considers the work to be his personal opus, the band sat on it for months. After label shopping didn’t yield the preferred results, Life in Jersey decided to put it out on its own. But in a characteristic move, the band members picked a far-away release date and spent five months building anticipation until its August 1 party at RecordBar.

“We don’t even want to play in town unless we can make it an event,” Land says.

Back at Rock the Light, despite the band’s lack of promotional tools, a few hundred people have gathered in front of the Time Warner stage by the time Life in Jersey starts chugging. In the midday heat, teenagers wearing crosses and T-shirts with sayings like “The Devil Is Stupid” pack in as close to the guys onstage as they can get.

Willey bangs his stylized mullet; Land leans into the faces of the first row, singing over power chords in a voice that sounds like sand is rubbing the back of his throat. The mass of people overflows into a shaded walkway. Afterward, fuss over the band peaks when kids ask for autographs from Land’s wife.

Meanwhile, on the other side of the venue, a spiritually outspoken former member of Shiny Toy Guns, who’s signed to a major label, panders to a small, tepid crowd.

Life in Jersey rocks its own light at Davey’s Uptown on October 12.