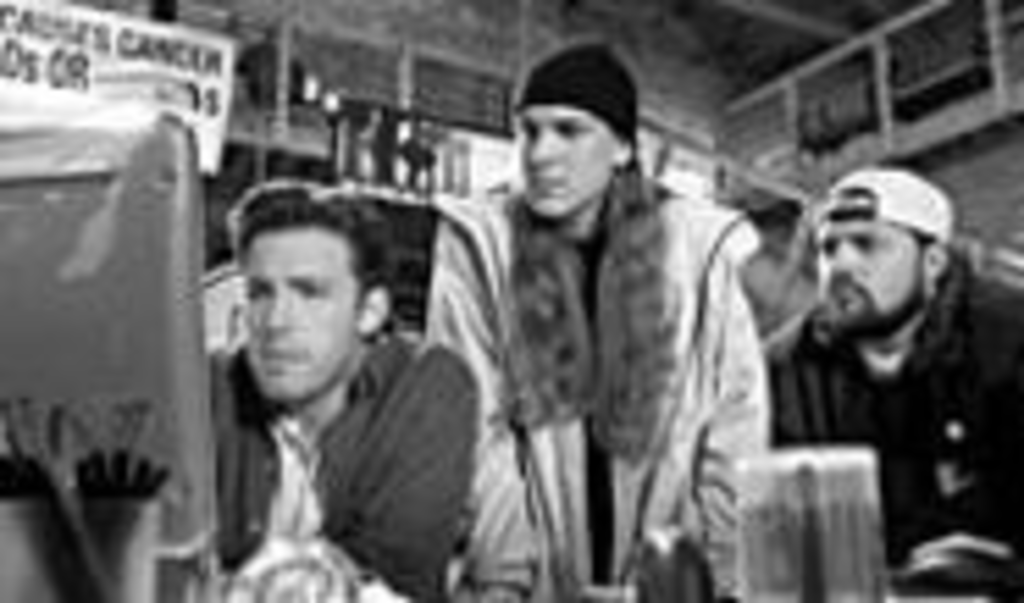 Beware the filmmaker who looks through the camera’s lens and sees only himself on the other side, blowing kisses. He’s the fool who confuses personal vision with jacking off, and he’ll try every time to convince you there’s something meaningful and imaginative in the shallow and hackneyed. He is so absorbed in a universe of his own creation that he fails to see its flaws; the ground could be breaking apart, threatening to swallow everything whole, and he would stand back and insist it’s a beautiful day. But how can he discern quality from crap when he can’t see beyond his own self-satisfied smile (and those of his acolytes, who celebrate and enable his every misstep)?

Kevin Smith is one such filmmaker, and for the fetishists and fanboys who immerse themselves in his so-called Askewniverse (named for his production company, View Askew) and obsess over his DVDs (which are loaded with hours of outtakes and commentary), that’s not really a problem. They groove on the inside jokes — which is all Kevin Smith movies have become, especially now — and giggle at every fart and fag joke, no matter how tiresome and repetitive they’ve grown over the seven years since the release of Smith’s low-rent Clerks. What they’ve failed to notice, as evidenced by the giggles of approval during a recent preview of Jay and Silent Bob Strike Back — allegedly Smith’s final installment in his Red Bank, New Jersey, series — is that Smith long ago stopped being a filmmaker and instead turned into a franchise maker, a peddler of wares that aren’t built to last past tomorrow.

Smith has created such an insular universe that anyone unfamiliar with his previous films — Clerks, the unjustly maligned Mallrats, the half-excellent Chasing Amy and the ambitious but ultimately infantile Dogma — will be utterly lost in Jay and Silent Bob Strike Back. You need a roadmap and a compass, and the movie isn’t interested in providing either. Smith the filmmaker has become Smith the comic-book writer. You can’t walk into Jay and Silent Bob and expect it to make sense without your having studied and absorbed the previous “issues.” At $20 million, this is one long, expensive inside joke.

It’s also a plodding infomercial, pushing everything from graphic novels to Smith’s old DVDs; it all amounts to product placement for View Askew merch. Even the plot has been lifted, more or less, from one of Smith’s old comics, in which dope-on-dope Jay (Jason Mewes, all stoner’s grin) and Silent Bob (Smith, the poor man’s Harpo Marx) discover there’s a film being made about them, or at least their comic-book counterparts Bluntman and Chronic, to be played by American Pie‘s Jason Biggs and Dawson himself, James Van Der Beek. It’s the duo’s intention to go from Jersey to Hollywood to sabotage the film, unless they get paid by Chasing Amy‘s comic artist Banky or Miramax, which is funding Bluntman and Chronic (and Jay and Silent Bob, heh heh).

Once more, after Dogma, Smith has made a road movie: Jay and Silent Bob trek across country, encounter their share of freaks and geeks (among them George Carlin as a hitchhiker who trades blow jobs for rides — “If it’ll get me a couple hundred miles across country, I’ll take a shot in the mouth,” he says during one of the movie’s self-debasements), hook up with four leather-clad jewel-thieves (including Shannon Elizabeth), kidnap a monkey named Suzanne, cross paths with law-enforcement officers played by Judd Nelson and Will Ferrell and wind up in a light-saber duel with none other than Mark Hamill, whose entire career has been reduced to self-parody.

As satire, the film is decidedly lightweight. Smith thinks that throwing around pop-culture references (Star Wars, Planet of the Apes, Daredevil, E.T., Purple Rain) is the same thing as commenting on them. Jay and Silent Bob is a warmed-over rehash of tired ideas and exhausted characters who exist solely because their creator couldn’t be bothered to come up with anything better.