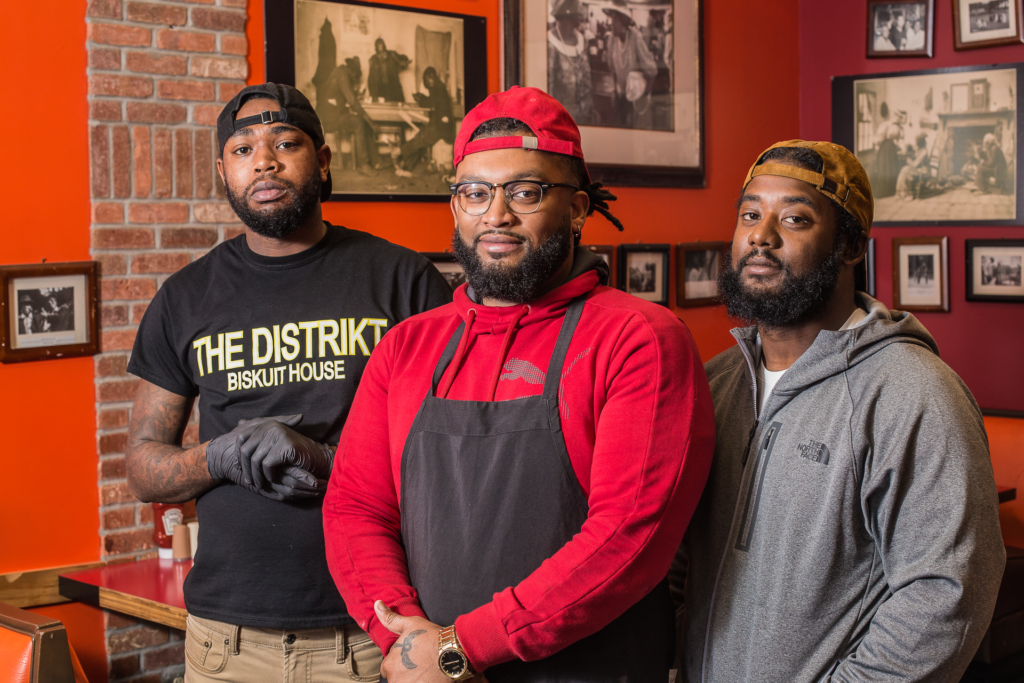 In 2016, chef Joe West’s well-publicized partnership with then-restaurateur Erik Borger fizzled out. West had planned to open Kusshi, his dream restaurant (a kind of permanent pop-up), within the cavernous Komatsu Ramen space. Following the dissolution with Borger, West trawled for investors but staked himself on a safer bet: an executive chef position at Stock Hill, Bread and Butter Concepts’ version of an expense account–courting Plaza steakhouse.

The restaurant opened in December 2016. Ten months later, West found himself trimmed from the payroll.

“It was kind of a surprise but kind of not,” he says. “I tried really hard to make things work, but it’s the whole saying of a ‘square peg in a round hole.’”

West has worked in kitchens since he was 15 — including stints at celebrated restaurants such as 40 Sardines, Alinea and Bluestem. Cooking is what he knows. So at least now, he felt free to dive back into Kusshi. His last day at Stock Hill was September 17. On September 18, he announced the return of Kusshi’s pop-up dinners.

On November 28, he announced he was ending Kusshi’s pop-up dinners. Now, he’s thinking about leaving the restaurant business altogether.

“I have to put away the artistic mentality and that whole ‘I’m the chef and this is what I do’ kind of thing,” West tells me. “I just have to put that aside.” Perhaps noting my expression, he laughs and adds, “I know, it’s kind of sad.”

West is soft-spoken and straight-edged — a square peg that doesn’t fit just any square hole, either. I ask if he’d open Kusshi as a real, brick-and-mortar restaurant if the right investors came calling, and he gives me a “well, duh” kind of look. Still, he says his immediate goal is something more stable, more mature, less steeped in the mercurial tempers and self-destructive behaviors popularly associated with the white coat. Yes, Kansas City’s restaurant scene is booming. But West can tell you: What’s great for diners isn’t always great for chefs.

On paper, the local restaurant industry has rarely looked healthier. According to County Business Patterns data from the U.S. Census Bureau, the Kansas City metro added 79 full-service restaurants from 2012 through 2015. That trend has continued. As of December 8, Kansas City, Missouri’s Regulated Industries list of pending new licenses included more than 30 new full-service restaurants in varying stages of licensure and approval.

“There’s so much going on in Kansas City right now,” West says. “So many restaurants, so many options. And not enough people are going out to eat.”

National figures push back a little at West’s contention. Household spending on restaurants went up by 3 percent from September 2016 through September 2017, according to the U.S. Department of Agriculture’s Economic Research Service. Households are spending a greater share of their food budgets at restaurants, too. In 1970, we spent about 26 percent of our food budget on food away from home. By 2014, that share was nearly 44 percent.

But chefs and restaurant groups and investors all want a piece of that pie. And as more and more restaurants compete for the same diners each year, those pieces are getting smaller. Today, restaurants need more than just a solid menu to break through the competition. They need novelty. 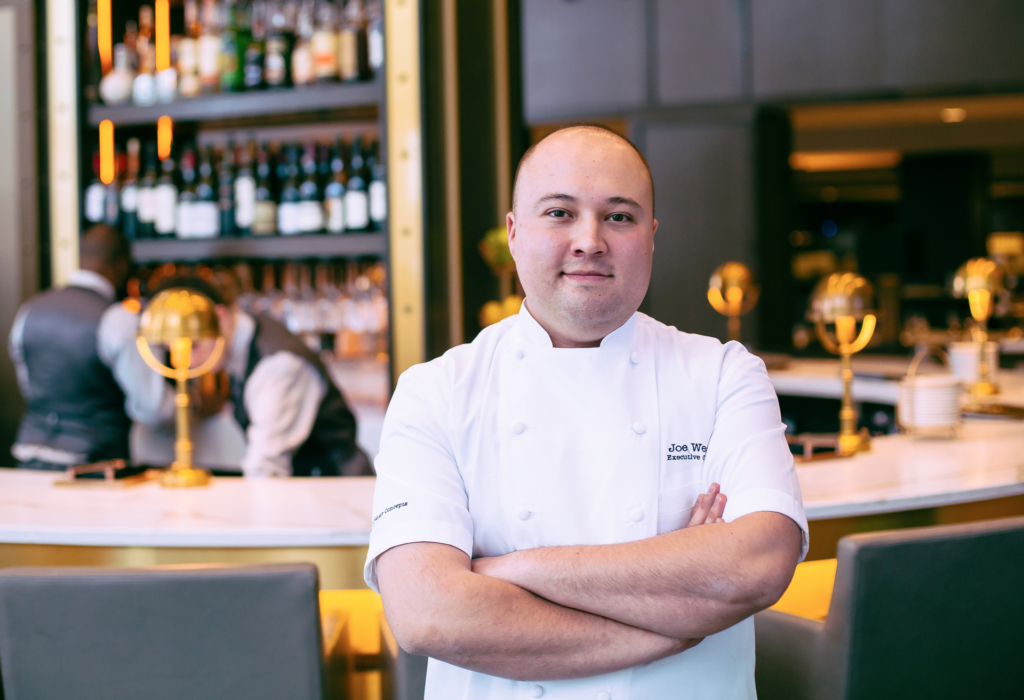 When West first launched Kusshi, in 2015, his sales were strong. There was competition then, too — pop-ups such as the national company Dinner Lab (now defunct) and Überdine were hot-ticket events — but West had no trouble filling seats. He put on dinners once a month, drawing, he says, about 40 diners to each. But the latest go-round drew a starker picture; he struggled to bring 14 guests to his December pop-up, then canceled a planned New Year’s Eve dinner when no one had made a reservation three weeks out.

As the economy has recovered following the recession, diners’ expectations have changed. West says it’s not just about the food anymore. We want ambience, he says. We want an Instagram-worthy tablescape. Pop-ups are at a disadvantage there. Nomadic outfits have to travel light, and people with their pick of brick-and-mortar favorites often balk at paying top dollar for a meal served on paper plates with plastic flatware.

Maintaining consistent, high-quality service can be a challenge, too. Traditional restaurants are already feeling a staffing crunch — and they’re able to offer servers much more consistent hours than an intermittent pop-up.

So what’s a local chef-entrepreneur gotta do to get butts in booths? For Guroux “Roux” Khalifah, chef-owner of the new Distrikt Biskuit House, the answer seems clear: Keep your menu streamlined and consistent, and give your pop-up a permanent address.

Khalifah’s road to entrepreneurship was a long one, testing his patience. After attending Atlanta’s Le Cordon Bleu culinary school, Khalifah worked in kitchens at Lidia’s and the Bristol, among others. But it was a stint at a Hy-Vee Market Grille that finally motivated him to venture out on his own. He walked away from that job last January, burned out after long hours cooking food he wasn’t passionate about.

“It’s not all about the money with me,” Khalifah says. “But I saw what I was able to produce for other individuals, and I told myself: If I can do these types of numbers for someone else’s business — someone else’s dream — I can potentially do the same thing for myself.”

He picked up a few private chef and catering gigs under his own brand, No Genre Dining Services. But he felt rudderless. “I was kind of bouncing all over the place,” he says. “I was trying to show people I could do this and that, and I wasn’t sticking to anything. I wasn’t consistent.”

A trip to the Dominican Republic with his wife gave him a new spark, he tells me. In culinary school, he had devoted long hours to perfecting his biscuit recipe. The inedible “hockey pucks” his mother made when he was a child — “bless her heart,” he says — inspired the fascination. But he hadn’t done much with the old recipe.

Enter Distrikt Biskuit House, a pop-up restaurant Khalifah launched inside the Lutfi’s Fried Fish on 63rd Street. Although Khalifah is now slowly expanding his menu, he started with the basics: buttery, flaky biscuits bookending a perfectly fried chicken thigh sleazed with cheese. Jam on the side, if you must.

The simplicity was strategic. He calls the biscuit sandwich the “hook,” a way to build a regular customer base and generate some name recognition by demonstrating his knack for consistency. “That way, when I do decide to give them a little something different, they’re already locked in.”

It’s paying off. On his first day, Khalifah estimates, he made six to eight sandwiches. In his second week, he was turning out 25 a day. A month in, and he was selling 100 to 200 sandwiches most days. “It took on a life of its own,” he says.

Social media has been a main ingredient in that exponential growth. That hunger for novelty? Right now, the Biskuit House is feeding it. The pop-up has a hyperactive Facebook presence, and loyal fans have been Instagramming biscuit glamor shots practically since the oven was preheated.

There have been setbacks — just before Thanksgiving, Khalifah had to go dark. The city has rigid guidelines for operating businesses within businesses, and his pop-up kitchen had been deemed less than strictly kosher. But when he reopened, the customers returned — and continued to multiply. And that growth made him confident enough to sign a lease for a space on 3959 Troost, just down the street from the popular Urban Café, which opened last year. Khalifah is unsure when he’ll open the popped-out Biskuit, but he hopes to make the move sometime this spring.

Like West, Khalifah initially figured he’d need investors. He put together a business proposal and prepared himself to make cold calls. But in the end, he decided to go it alone. His dad and his uncle — both seasoned restaurateurs — told him investors would come to him once they’d seen what he’d created.

Khalifah is reluctant to talk about his family connections, but he had good reason to take the advice to heart. His uncle is Lutfi Khalifah — that Lutfi. And his father, Abdul Khalifah, is helping him finance his new restaurant on Troost. But it’s still business: Khalifah pays fair market rent on the Lutfi’s space, he says, and he’s been hustling for weeks — expanding his morning hours, adding weekend service — to channel as much of his own capital as possible into the restaurant.

He’ll need it. He’s entering the restaurant business at an unusually saturated time — and early signs for 2018 suggest local competition will remain robust. In 2016, the Kansas City, Missouri, Health Department conducted 413 pre-opening inspections for new food-service operations (a comprehensive statistic that includes food trucks, a few farmers markets and fast-casual outposts such as Chipotle). In 2017, it conducted 543 (not counting inspections conducted after December 11).

Khalifah and West aren’t the only ones facing hard choices. A boom in the restaurant biz brings other concerns — say, a shifting composition of jobs toward the low-wage, high-turnover food-service sector. Growth in restaurant jobs is outpacing job gains in education and health care. If recent trends hold, there will be more jobs in restaurants and bars than in manufacturing by 2020. That’s bad news for anyone invested in slowing this country’s runaway wealth inequality.

“There’s this image of opportunity,” West says, and his emphasis carries a strongly implied but. Growth in some segments of the restaurant industry — especially the franchise segment — is starting to slow. Cautious industry watchers have been warning for months that we may be in a bubble, and there’s been plenty of breathless coverage about whether and how soon that bubble will burst.

But a total industry crash seems unlikely. Our collective taste for dining out feels like a durable habit (barring — knock on butcher block — recession or nuclear war). And economists such as George Mason’s Tyler Cowen, who writes for the popular economics blog Marginal Revolution, say the industry’s growth actually is sustainable. The challenge facing local restaurants has less to do with motivating diners to get out than it does with convincing them to come back over and over.

Every competition has winners and losers, and every local restaurant is at risk. Time will tell whether West was right to cut his losses. But for now, Khalifah is determined to stay in the game.