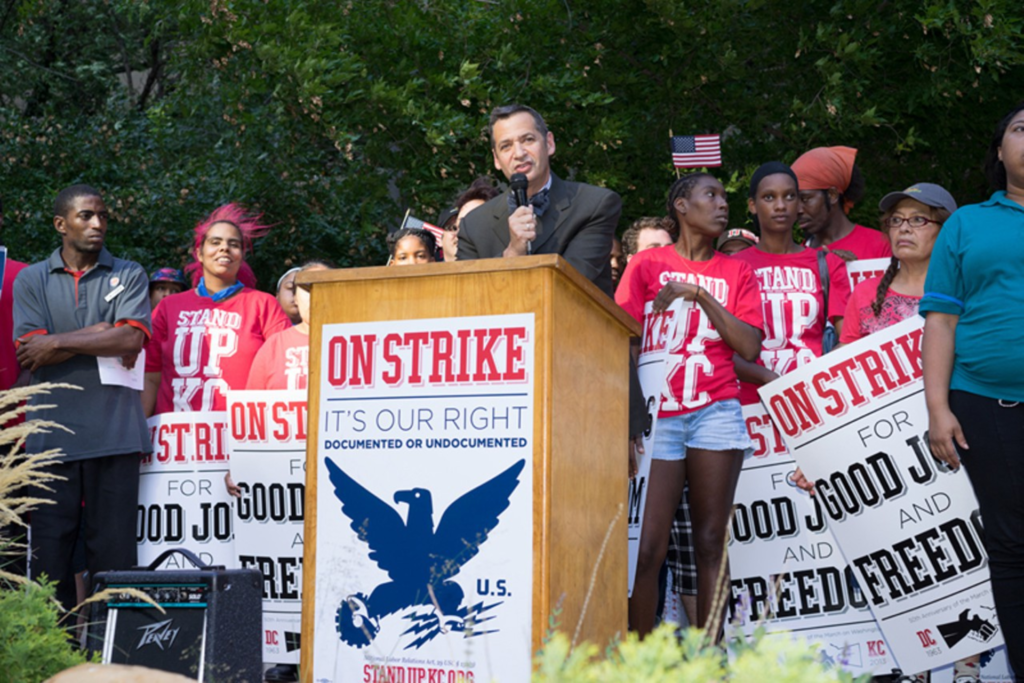 This evening, at 5 p.m., advocates of raising the minimum wage will gather in front of City Hall to “turn up the pressure on our Mayor and City Council [to] make sure they do the right thing for working families and raise the wage to $15,” according to the event’s organizers.

Public conversations among city leaders, business leaders and community advocates have been ongoing since the beginning of the month about how best to implement such an ordinance in Kansas City. St. Louis is also in the process of drafting a similar ordinance.

These weekly meetings — which are examining issues such as how high the minimum wage should rise in the city, at what increments over the next five years it should rise, and whether some small businesses should be exempt, among other things — will wrap up July 16, at which time Mayor Sly James has requested an ordinance be drafted and subsequently voted on by the City Council. (Midtown KC Post has a story on the most recent meeting here.)

The process is being fast-tracked due to the fact that the Missouri Legislature this session passed a bill that would prevent cities from raising the minimum wage above the state’s minimum wage, which is currently $7.65. But because the law doesn’t take effect until August 28, leaders in Kansas City (and St. Louis) believe they have the authority to pass their own minimum-wage laws prior to that date.

There are also, by the way, municipal elections being held tomorrow. Based on the turnout for the primary elections a few months ago, we are not holding our breath for much of a turnout. But the raise-the-wage issue provides a very graspable example of why these elections are important. These people have the power (probably) to decide whether many Kansas Citians will get a raise. And though many of the candidates for City Council likely won’t vote on the minimum-wage increase (the vote will be held before the current council), we were curious where the candidates stood on the matter. We sent out requests for comment, and here’s what we got back. (We’ll update if more candidate responses come in.)

“My position is that clearly the current Minimum Wage is inadequate to deal with the economic situation of many of our residents and that a rise in it is justified. I am hopeful that the conversation being had between those who wish it to rise to $15 an hour and those that represent the business interests affected by such a rise will be able to jointly suggest a plan that will both alleviate some of the issues facing their employees while keeping their businesses viable and sustaining.”

“I promise to support a $15.00 an hour wage by 2020. It is past time that not only Kansas City but the Nation pay attention to what’s happening to working families. The struggle has gone on for too many years and it’s time for change. It’s time to say enough is enough. Let’s work together to improve the lives of working Americans.”

“I’m supportive of [raising ]it. You clear $15,000 a year if you make minimum wage. The misnomer is most affluent people think this issue is about 16-year-old kids at the car wash during the summer. But average age of a minimum-wage worker is in the 30s. My concern is that, because of the state deadline, we’re running on this when maybe we should be walking. I’d like to try to see the council pass a motion of some kind where there’s language in it that says this ordinance goes into effect at a certain time — the idea being you legally tie it back so you can get around the state deadline, and in the meantime really take the time to look at studies and figure out the best way to implement this.”

If no such legal loophole is possible? “Then I think just do it and do it now. Nobody, if you sit down and talk to them, thinks a 35-year-old mother of two should be working full-time and $15,000 a year.”

“I want to challenge the system and raise the minimum wage because there are people who are hurting, working poor, trying to earn a living wage every single day.”

“It looks like this will be voted on before I’m on the council, but I’ll say that I know that some Jeff City politicians have suggested the city can’t do this. That makes me wonder why people in power in Jeff City, who are so interested in preserving state’s rights to govern themselves, are trying to constrain cities’ rights to govern themselves. People talk about fears of what goes on in Washington. I’d suggest concerns about what happens in Jeff City.”

“I haven’t reviewed the issue with the state as a legal matter, but I think the city has competent legal counsel. I support raising it $13 by 2020, which I believe is what the Mayor has suggested.”

“Kansas City needs a raise. With that simple truth in mind, I stepped-up with thousands of my neighbors and signed the raise the wage petition early in the process. With regard to the economy, President Kennedy once observed that ‘a rising tide lifts all boats.’ The tide lifts from the bottom up, and not the top down. The effort to raise the minimum wage, and my newly adopted Jobs for Neighborhoods Program echoes the spirit behind President Kennedy’s words. Minimum wage workers spend the money they make on basic needs: rent, food, clothing, utilities. That spending lifts the economic status of all Kansas City – buyers and sellers alike. If re-elected on June 23rd, I will work to build consensus on the council to give Kansas City a raise – sooner rather than later.”

“I support raising the minimum wage and signed the petition calling to increase Kansas City’s minimum wage. Now, the state may prevent us from doing that, but there are things the city council can do right now. I actually testified to the council and recommended they require businesses who contract with the city to pay a living wage, especially businesses receiving tax incentives. It’s reasonable to expect businesses receiving millions of taxpayer dollars to pay their workers a living wage.”

“The fact that full time minimum wage workers make only $300.00 per week and therefore can’t afford basic necessities like rent, food and gas, is appalling. It is time to ensure that families are rewarded fairly for the work they do and treated with the dignity they deserve.”

“I support the current effort towards raising the minimum wage. I look forward to working with all organizations who endeavor to make this happen.”

“I opposed legislation in Jefferson City that would take away local control on this issue. I think Kansas Citians should have a voice in deciding what is a fair and livable minimum wage in their city because it is critically important both to our city’s future and the quality of life of our residents.”

We wrote about the local movement to raise the wage here.