What’s worse than coronavirus? The rap-rock album ‘Loud Rocks’ from 2000 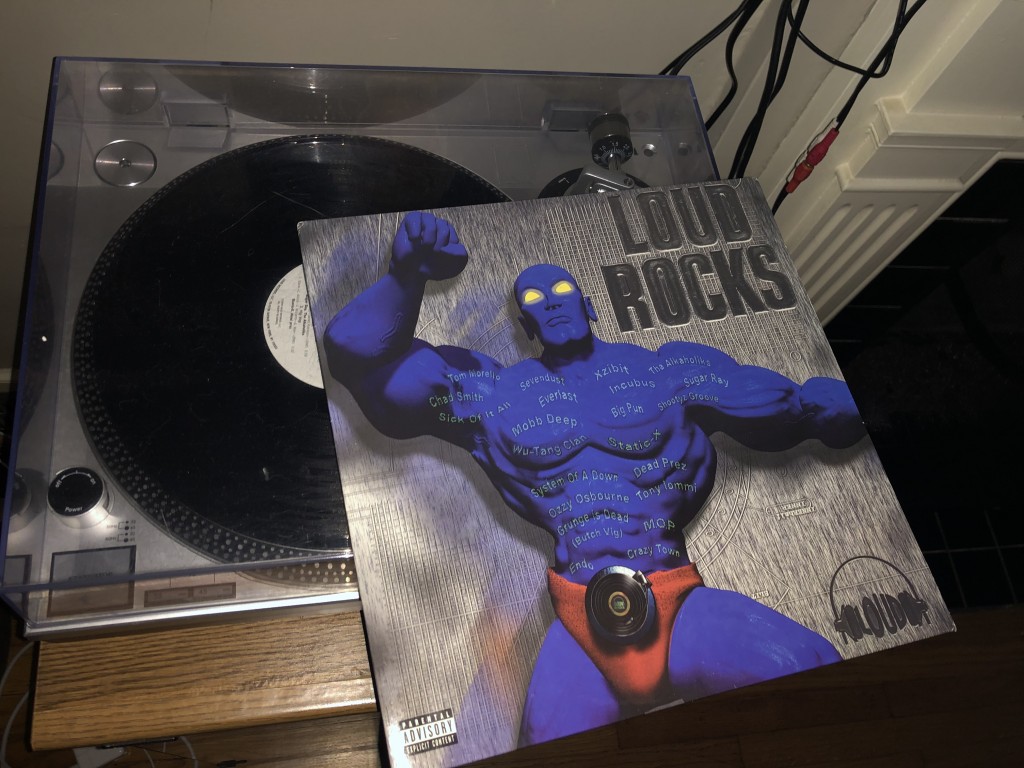 This awful album that I bought on vinyl for some reason. // Photo by Brock Wilbur

Well. Here we go. Strap in, folks. I’ve been going out of my way to try to find things in pop culture that I consider to be worse than the coronavirus. Hence the article you’re reading right now. This is something that causes me great personal harm, to recall and reflect upon, because the 2000s were a terrible time and I was a terrible product of it.

This was intended to be a publication for 4/20, because I thought it would be a fitting match that that day– and its “nothing matters if it is funny” sensibility. But no. I’m glad that we can explore this elsewhere. Instead, I finally got around to it right now. Uh. I do not think the lack of 4/20 context makes this any less funny or bizarre.

Lemme just throw this out now: if you have something in pop culture that you consider to be worse than coronavirus, send it my way at brock@thepitchkc.com. I think we’d all love to compare our current awfulness against other intentionally created awfulness. That’s where I’m finding happiness, and others might too.

In 1993, a soundtrack was released for the film Judgment Night. I’m pretty sure the film itself involves gangs. Perhaps gang violence. We all agree that gangs aren’t good. At least, not the cool gangs. If you’re in a cool gang, omg please invite me in. Point being: this is considered to be the birthplace of true rap-rock. And it deserves a cherished spot in that genre moment. The album went out of its way to match rock bands to rap musicians and encouraged them to create entirely original compositions. That album matched groups like Cyprus Hill with Pearl Jam, and Mudhoney with Sir Mix-A-Lot. The results are certainly wildly uneven, but it showed the potential of the genre blend in a manner far beyond Run D.M.C. pairing with Aerosmith for mainstream success.

Yes, I am indicating that there are elements of rap-rock that I found to be engaging and full of potential. You can give me a pass on this. In High School, I had a Limp Bizkit tribute band. I even owned a seven-string guitar. Look, I’m not the best. But what I’m evaluating is fair.

This brings me to the album Loud Rocks from 2000.

Judgment Night was the first to suggest that rappers and bands could make something together. Half a decade later, that sort of collaboration suddenly became both the easiest sell and least rewarding artistic event imaginable. In ’93 no one could have pictured the Family Values Tour nor the birth of Staind. Sure. But at least that original soundtrack went out of its way to force participants to create something wholly original. That’s why Judgment Night is a forever hero.

That there is Loud Rocks. I’ve gotta start this with context. I was in high school. I didn’t know any better. I was picking up this girl every morning before school that I thought was cute even though she was the only Mormon in our city. This album became my ONLY album for so many reasons. But the album itself is lunatic material.

While Judgment Night asked artists to collaborate, Loud Rocks skipped all the necessary steps. Essentially, it just sent the rap vocal Pro-Tools tracks to various famous bands, and asked them to replace the instrumental side. Nothing creative, smart, or good happened here. But an album did happen. And for idiots like me, in high school, it was a revelation.

It clearly was not. And it clearly should be scrubbed from the history of music. But yet, here we are.

Here is the official tracklist, which should offer you the base jumping-off point:

Right. So that gives you a general idea of what we’re up against.

I think you can see how an edgelord kid in 2000 grabbed this in a Musicland and thought he was King Shit. It wasn’t an exaggeration; my friends were constantly asking where they could get this album. As if it were some kind of B-Side deep cut. Dear Reader: it was not.

So the reason I bring up the album is that it is impossible that it exists. It’s simply vocal tracks from famous rap songs transposed into Pro-Tools tracks for rock bands that had traction in 1999. It is perhaps the stupidest LP that has ever existed, and also the source of so many joyful high school memories from me.

But it, via that joy, does become the kind of thing I want to explore and share with others. Especially now. Especially when you know how fucking batshit terrible it is.

Excuse me as a fan of rap-rock as a genre. Forget that I’m someone who tried to start a Limp Bizkit tribute band in 2002. Erase me from the narrative. That’s fine. What remains is this album, whose mere existence seems to spit in God’s face.

So yes. A song can exist that celebrates the idea of music itself, while the dead lead singer of a heavy metal band can re-iterate the genre of the track by shouting it atop the recording? I’m genuinely not making fun of this. It’s just the situation.

But this song….. This song genuinely devastates.

And. Okay. Here’s where you make fun of me. And where I make fun of myself. My name is in the song, yet I have no idea why this exists. No one involved should have agreed to it. My god. Please take it back. Please. This is the most embarrassing recording, perhaps in the entirety of the 2000s, and it was right at the start.

Here’s the wild part. We reviewed this album when it released. 20 years ago. And he had most of my same complaints. Uhhhhh. God bless The Pitch. Always taking on the hard stories.

Categories: Music
Tags: Coronavirus, COVID-19, Incubus, Loud Rocks, rap-rock, terrible music, Why Do This To Yourself?