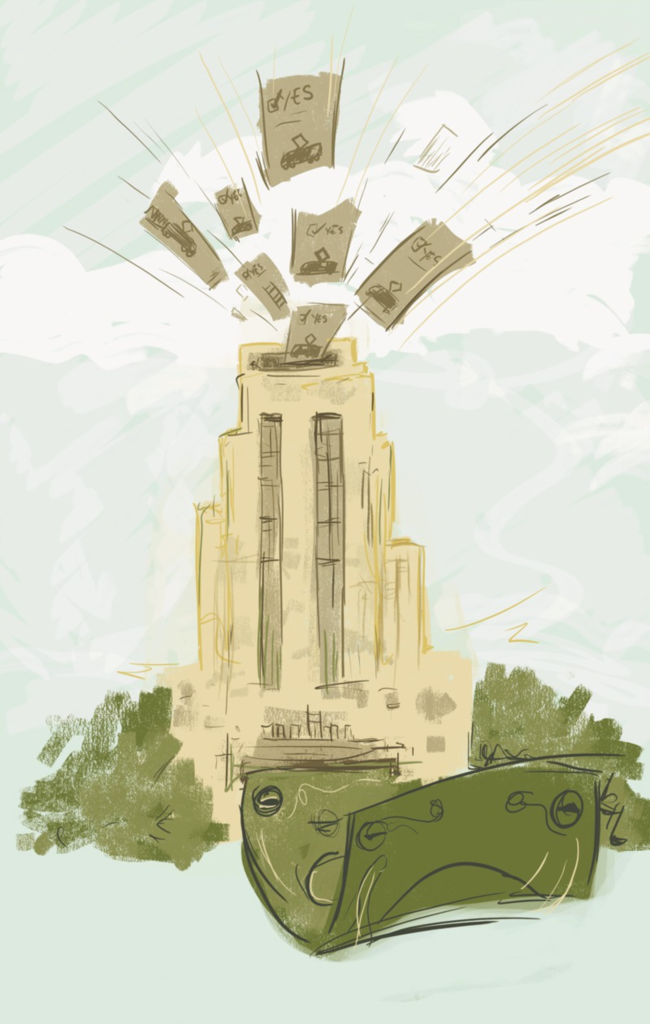 If there was ever a time to vote down a Clay Chastain transit proposal, it’s this November.

For one thing, it’s barely his proposal now. An initiative that started as a long-sought redress to Chastain’s scotched 2006 light-rail plan — still the only rail plan to have earned a citywide mandate at the ballot box — has been run through City Hall’s shredder, leaving voters with a mutilated carcass to pick over come Election Day.

The City Council voted on August 14 to turn Chastain’s most recent proposal into two of the most vaguely worded sales-tax-increase questions imaginable. On November 4, voters get to decide whether to increase local sales taxes by a quarter cent for “the purpose of funding capital improvements,” or, in the other question, to add a separate one-eighth cent for “the purpose of providing a source of funds for public transportation.”

That’s not what Chastain had in mind when he returned here from exile in 2010 and started hanging out in front of grocery stores with a clipboard. As always, he was able to gather enough signatures to force an election. As usual, KC’s City Council decided it didn’t need to put it on the ballot.

A long legal battle ensued, and the Missouri Supreme Court finally ruled earlier this year that a sales-tax election had to happen in November. The loophole: The city would be allowed to write that ballot’s language.

Rather than simply allowing voters to cast an up-or-down decision on Chastain’s idea, this paternalistic City Hall decided that the public didn’t need to hear any details. It’s the latest show of contempt for Kansas City voters by city leaders who openly mistrust the electorate. See also: the narrow and arcane voting district created in 2012 as a “transportation-development district” in order to secure approval for a 2-mile streetcar starter line.

This stuff is all perfectly legal yet obviously designed to achieve a specific result.

It doesn’t always work. The city tried its transportation-development-district trick again this summer, hoping to expand the streetcar line to the south and the east. The measure was trounced at the polls on August 5.

Post-election hangovers hadn’t worn off before city officials started crowing that they’d find another way within the next year to expand the streetcar, despite losing by 20 percentage points.

The big question: Would the city try to use the Chastain taxes to start expanding the streetcar if it passed?

City officials have so far insisted that no one has a clue how the money would be allocated should the Chastain measures pass.

“The simple answer is no, we don‚Äôt have a plan,” says Kansas City spokesman Chris Hernandez, “because it’s not a city proposal.”

That’s a dodge. It wasn’t the city’s idea to put another sales-tax hike on the ballot, but the city played a central role in watering down the ballot language to the point of near meaninglessness.

The city could have drafted language that reflected a compromise with Chastain, mainly by putting the term “light rail” before voters. James said at a council meeting last week that Chastain refuses to negotiate. However, Chastain’s attorney, Jeffery Carey, e-mailed the city’s lawyer, Sarah Baxter, offering to discuss a compromise. Baxter replied that she was not authorized to negotiate.

When asked about this discrepancy, James spokeswoman Joni Wickham told The Pitch in an e-mail, “Mr. Chastain has never been willing to give, only take. In addition, his tactic of contacting council members directly (incessantly, I might add) diminishes prospects of a rational, fruitful negotiation.”

The Pitch asked to see phone records that would indicate numerous phone calls from Chastain, but received no response.

It’s more likely that some city leaders know exactly what they want to do with the money but don’t want to be seen advocating a sales-tax measure (or anything else) with the whiff of Chastain about it.

The fact that the Kansas City public-transit conversation looks the way it does today is owed almost entirely to local government’s contempt for Chastain.

Chastain’s 2006 light-rail plan was a fairly bizarre concoction. (One word: gondolas.) It was so odd, in fact, that the city didn’t bother campaigning against it. Chastain had always lost before; the council figured he would lose again.

Instead, his proposal passed easily.

One good reason that voters liked it: The 27-mile light-rail plan, with its attendant buses, was geographically wide-ranging. It favored utility over sex appeal (give or take the gondolas). Compare that with the more recent streetcar proposal, which city leaders have acknowledged is a favor to real-estate developers first and a means to transport people from one place to another (such as to and from a job) a distant second.

If the council back then had just used the tax authority that voters passed to build the more realistic aspects of Chastain’s plan, a fixed-rail system stretching from midtown to Kansas City International Airport would be complete or close to completion today.

But the streetcar already takes bus money, and the expansion proposal was underfunded; local taxes would not have covered the streetcar expansion under the August 5 plan.

It’s more likely that egos and a distaste for Chastain motivated the 2007 light-rail repeal. But the perennially frustrating Chastain is even more annoying when he’s right, and if the city had worked with him back in 2007 and stripped out the head scratchers embedded in his plan, then it would today be able to boast about a progressive transit system. Instead, the mayor and the council are stuck in an endless sales pitch about some tracks for a streetcar designed to inch up and down friendly voting precincts.

It’s not unthinkable that the November sales-tax questions could pass. Kansas City voters narrowly approved an ill-conceived statewide three-quarter-cent sales-tax increase on August 5 to fund Missouri roads and bridges and other transportation needs, even though the rest of the state soundly rejected the idea.