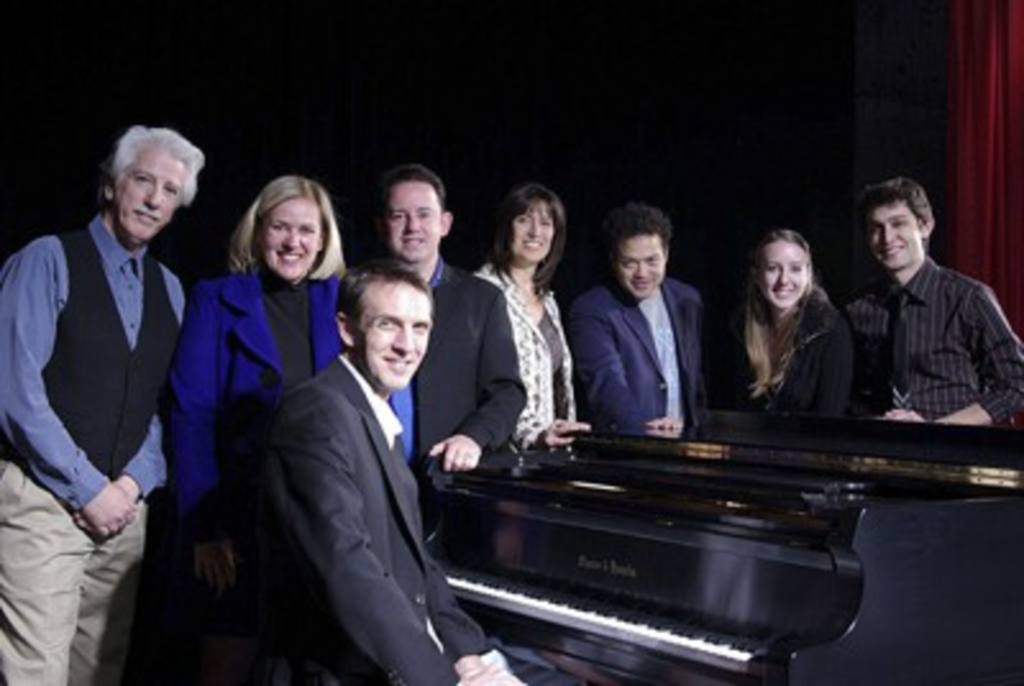 Recent productions at the Kansas City Repertory Theatre have brought this town a pair of shows that demonstrated the power of cohesion: In The Arabian Nights and The Glass Menagerie, every element of stagecraft came together like notes making up perfect chords. Other shows, by comparison, now seem a little more scattered, reduced to their individual elements instead of made up of them. Instead of marveling at the totality of an experience, audiences leave even a good show buzzing about the highlights. “Vanessa Severo is amazing,” I kept hearing after the Unicorn’s The Clean House. At the Musical Theater Heritage production Who’s Lerner & Loewe? the crowd — and I — boiled over with love for Nathan Granner, whom I’ll get to in a moment.

Who’s Lerner & Loewe? is the most ambitious cabaret revue so far for George Harter’s eager-to-please MTH, a company that celebrates musical theater not only with tux-and-candelabra reverence but also with an old-timey radioland goofiness that catches the spirit of yesteryear’s showbiz like a firefly in a jar. The result is good fun and superior singing, with cast members joining Harter in doling out informative tidbits about whatever show or composer they’re honoring. Sometimes the bursts of rambunctious humor seem at odds with the lionizing, and sometimes the lionizing is over-the-top, but I like the mix in spite of its occasional unsteadiness. And because almost all musical theater produced in Kansas City is fundamentally nostalgic to begin with, I appreciate that MTH actually teaches about the past rather than just seeking refuge in it.

This time out, Harter and company pay tribute to lyricist Alan Jay Lerner and composer Frederick Loewe, the team behind Gigi, Camelot, My Fair Lady and others. Gathered casually on chairs and divans around a gorgeous piano, a cast of six sings well-chosen selections from the duo’s songbook. Songs such as Brigadoon‘s “Come to Me, Bend to Me” (nicely handled by Brandon Sollenberger) sound as if they bubble up, words and music, straight from a character’s gut — feeling made into song.

Sollenberger looks more comfortable with the reverence than the shtick. At times, he’s so earnest and humorless, he could be a recruiter for a cult. Show after show, I keep hoping he’ll either loosen up or make his stiffness into some sort of a joke. Lindsey McKee is an amusing and powerful presence; whether hitting one-liners or big notes, she makes her spotlight moments momentous. The eager Emily Harris bops about with loose-limbed charisma and a gift for oldfangled comedy voices, while Kevin Bogan pitches his rich baritone into stirring chorus work and an excellent “Get Me to the Church on Time.”

The ensemble singing is strong throughout the show, and Cary Mock’s piano accompaniment seems much more confident than it did in last December’s Spectacular Christmas. In MTH tradition, cast members grumble about their song assignments and take turns one-upping one another. Here, the comic bits feel more strained and the info-dumps more scattershot, with the cast sometimes seeming lost in them.

Still, most of the elements are good. And one is exceptional. Granner makes each of his numbers an event. He’s blessed with a commanding personality and a rich, resonant voice, one that pours out like quality stout from a bottle. There’s a pleasing surliness to him, a sense that he disdains bullshit, which lends meaning to those smiles he flashes. He’s one of those American tenors whom you occasionally spot singing “Shenandoah” during a PBS pledge drive, so you know he’s got power; perhaps more impressive are his control and finesse, the emotional logic with which he paces his solos, the way his singing takes on fresh timbre suited to whatever character he’s singing, be it Henry Higgins, King Arthur, a Paint Your Wagon cowpoke, or whoever it is Gene Kelly played in Brigadoon.

The Gene Kelly connection is an interesting one: Here’s a supremely gifted tough guy achieving greatness in musical comedy, which — even in the MGM days — isn’t exactly the province of tough guys. More interesting is that Granner, who sings rings around Kelly, approaches “The Heather on the Hill” conversationally, the same way Kelly did in the movie. If ever a singer could overpower a song, it’s Granner, but he works instead with the song so that Lerner and Loewe and Granner cohere, for part of the show, into that elusive whole.