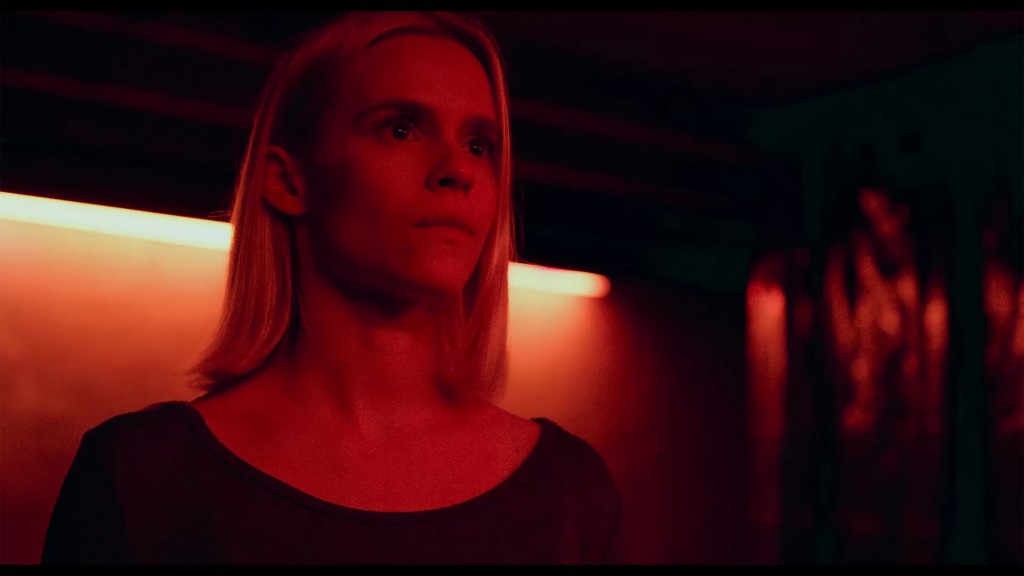 Ema Horvath as Liberty in the thriller/sci-fi, What Lies Below. // Photo courtesy of Vertical Entertainment

What Lies Below is the second-best film about a parasite to come out in recent years. Parasite still holds the title as the best, but second is still a pretty nice placing. Instead of commenting on the class system, What Lies Below uses its parasitic symbolism to examine the single mother-daughter relationship and the effects of its disruption. Not hitting on all calibers and features a far too messy climax, What Lies Below still manages to stand out as one of the sharpest horror films of the year.

From start to finish the film manages to maintain a proficient balance of enjoyability and eeriness. The stranger it gets, the more entertaining it becomes. It may be absent from many end of the year top ten lists, but those who watch are in store for an intriguing hour and a half.

Taking place at the horror genre’s favorite location, a spooky cabin in the middle of the woods, What Lies Below centers around 16-year-old Liberty’s (Ema Horvath) return home from camp to an unexpected guest. While away, Liberty’s mother Michelle (Mena Suvari) met and began a romantic relationship with John Smith (Trey Tucker), the dreamy microbiologist studying a rare parasitic leach. Surprised, disgruntled, and charmed by John, Liberty deals with her conflicted emotions and attraction to the stranger. Things begin to progress quickly between John and Michelle, while lines get crossed between John and Liberty. All this and more chilling secrets are in fact what lies below.

Director and Writer Braden R. Duemmler handles the complicated relationships in the film well. The premise of the family drama aspect of the film is based around the convoluted web of awkward attraction and disturbing actions that send more chills down your spine than the imagery that’s intended to scare you. Through the complications, Duemmler is effective in keeping the ship afloat and maintaining the story in the midst of the secrets. Keeping the narrative through Liberty’s point of view, audiences are left to question the actions of the adults around her in a similar fashion as our coming of age protagonist. Bleeding into a grey area of right and wrong and accident and purpose, we are strapped to Liberty’s mind trying to make sense of the unusual experience. Once things do in fact become clear, we are properly in Liberty’s shoes of survival mode. From awkward to intense, Duemmler masterfully crafts a sense of unease through the duration of the film.

The consistency of the unnerving tone is another strength of the film. There are only a few short periods that the film let allows you to put your guard down. Most horror relies on the repetitive narrative technique of “Characters danger, jump scares any minute, AHHH! I hope the monster doesn’t get ’em” to five minutes of dead time for the characters and audience to catch their breath while nothing of meaning happens before we repeat the scary time again. That formula is stale and one of the biggest issues plaguing the genre today. What Lies Below counters this repetitive cycle by instead solely focusing on an unnerving build to a grand payoff. Instead of scenes showing the monster, we are left to watch startling scenes showcasing how monsters regular people can be. The film builds a sense of realistic dread before it goes going off the wall with its horror. This gives the film its juice to stand out as a refreshing treat to the genre.

With how well Duemmler handles the tone and formula of the film, it is disappointing how badly he misses the mark with the end. The film’s greatest strengths are with its realism and the end just doesn’t meet the same quality when it goes all-in on the monster aspects. The monster itself is certainly interesting and one I’ve never seen anywhere else, however, the story goes off the rails in an unpleasant absurdity that carries none of the weight that the first half did. Once the mystery is gone and we are put in the thick of the action, there is nothing to hold onto as the film transforms into a bland stereotypical horror film. The technical features don’t hit the modern mark and you’ve left longing for the gripping nature shots in the beginning. Though the action is intended to be intense, it just simply isn’t due to how mishandled and off the rails the story and the look of the film becomes. Unexpected doesn’t always mean good, which is disheartening knowing that something better could have been.

Like the two halves of the film, the performances are similar in their highs and lows. Horvath is great as Liberty. She excels at portraying the vulnerability and confusion of a teenager thrown into an undesirable and possibly dangerous situation. Horvath brings the firepower to the important mother-daughter relationship she has with Suvari who simply isn’t good in this feature. Horvath shows that she can excel in both drama and horror. What Lies Below is a great vehicle allowing her to showoff both aspects and even when the end gets messy she still delivers. Tucker also excels as the creepy charmer. A man who you want to trust and love but there is something off-about him preventing yourself to do so. Tucker is fantastic playing this role in the first half, but unlike Horvath succumbs to the cheese in the second. Overall, What Lies Below is still a great platform for Horvath and Tucker to demonstrate the talent they possess.

If you’re craving new horror content after a painfully dry Halloween, What Lies Below gets the job done. Though there are things too rough to ignore with criticism, there is much creativity to be applauded. In the simplest form though, horror is meant to trigger a heightened emotional response one way or another, and What Lies Below does this effectively and thoroughly from start to finish. The film is far from perfect, but it still will be effective in meeting your needs of getting the creeps.