What it’s like to compete in the American Royal World Series of Barbecue, plus the week’s restaurant events 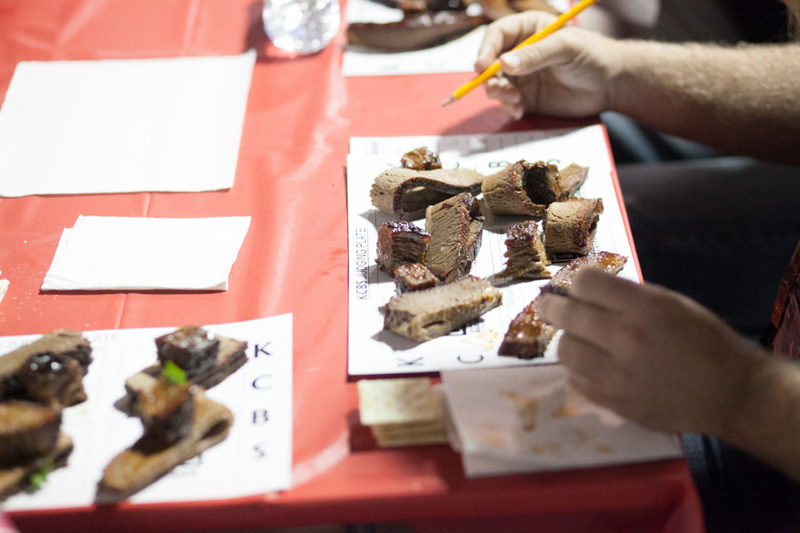 “We end up spending three to four days in a parking lot. It’s the only time we get to see some of our friends throughout the whole year.”

In only one context is that a description of ecstasy rather than a half-remembered bad dream: the American Royal World Series of Barbecue.

Todd Johns of Plowboys Barbeque is the describer in this case, and he has every reason to make the Royal sound good: Plowboys was the overall grand champion at the 2009 Invitational, the open-reserve champion in 2010, and won grand champion awards for its brisket in 2009 and its pork in 2008. But even those who have gone home without ribbons or trophies will tell you it’s a big deal: a party and a kind of family reunion, set against the backdrop of livestock shows, cooking demonstrations, live music, with some 600 teams competing (including a record 20 international teams representing 11 countries) in the flagship food events. Organizers expect 50,000 to attend the October 26-30 event.

This despite the event’s somewhat ignominious move from its longtime location at Kemper Arena in the West Bottoms, first to Arrowhead Stadium (after a memorable spat with the city of Kansas City, Missouri, a few years back) and now to the Kansas Speedway, in Wyandotte County.

“What [competing at Arrowhead] proved to everyone is that you can pick up the American Royal Barbeque and move it out of the West Bottoms and it is still at its heart the same,” Johns says. “The pavement has changed. I think for me and a lot of my friends, we’re still as excited this year as we were the year before.

“People from New England, California, Florida,” he adds. “The American Royal is the one time that we get to sit down and catch up, handshakes and hugs. For many of us, that’s the most important thing.”

Give or take the meat, of course.

Johns explains that each team cooks about 120-150 pounds of meat per contest — two to four pork butts, three to six slabs of ribs, one or two dozen pieces of chicken, two whole briskets. Participants must arrive at the event with everything they plan to use. But a truckload of gear and flesh and the will to win aren’t necessarily a match for the intensity of competition.

The spectators have to worry slightly less, as long as they remember that it’s more about looking and smelling than about tasting the true competition barbecue. Food trucks and other vendors will have snacks available, but the only way to eat as the judges do is to befriend the competitors (many of whom will gladly share the fruits of their labor) or to purchase Royal Tour tickets for Friday or Saturday, during which some samples are provided.

Outside the Royal, the world still turns. Here are the week’s special restaurant events.

Tonight, the National WWI Museum and Memorial (2 Memorial Drive) puts on a wine tasting called Operation Vin, hosted by master sommelier and master of wine Doug Frost. Expect to taste wines that became popular with soldiers along the Western front. The event begins at 6 p.m., with hors d’oeuvres and a cocktail hour; dinner starts at 7. At press time, the evening had sold out; check the museum’s events page (theworldwar.org) for last-minute tickets.

Whiskey and bourbon fans, take note of the Union Horse–themed dinner tonight at J. Gilbert’s Wood-Fired Steaks (8901 Metcalf, Overland Park). The three-course dinner features custom cocktails paired with a wild-mushroom-and-onion soup, rosemary-encrusted lamb lollipops with gnocchi (notably matched with a barrel-aged boulevardier, made with Union Horse bourbon), and a dark-chocolate espresso cake with bourbon whipped cream. The meal is $45 a person, not including tax and gratuity; reservations at 913-642-8070.

For those who could use a little time away from the city, Willow Spring Mercantile in Excelsior Springs (249 East Broadway Street) is setting out a four-course dinner featuring wines from Amigoni Urban Winery. The autumn-themed meal features locally sourced foods, with a pumpkin-beef stew the main course. The dinner is $50 per person, exclusive of tax and gratuity; call 816-630-7467.

Should you remain in the mood for Excelsior Springs and Missouri wine, the “Hallo-Wine” Trolley Tour takes place today from 11 a.m. to 4 p.m. Beginning again at Willow Spring Mercantile, the tour visits Fence Stile Vineyards and Winery, Van Till Family Farm Winery, Four Horse and a Dog, and Of the Earth Farm Distillery. Tickets ($99) include full tastings at each stop (up to 20 wines; see if you are still standing after that), the trolley ride and a souvenir bag. Purchase tickets online through the Excelsior Springs Chamber or by calling 816-630-6161.

Chef Joe Shirley hangs out his Überdine shingle tonight for a pop-up dinner called “Spooky Supper.” Fourteen courses, with drink pairings, are promised in a “historic haunted venue,” to be announced to guests the week of the event. The dinner is $110, not including tax or gratuity; see uberdinekc.com.

The last Sunday of October brings another food-truck brunch at the Westside location of the Roasterie (1204 West 27th Street). From 10 a.m. to noon, food will be available from Beauty of the Bistro, Dellario Gelato, El Tenedor and Fungal Fusion.