What happens when art replaces blights, then gets ripped off? A fine mess 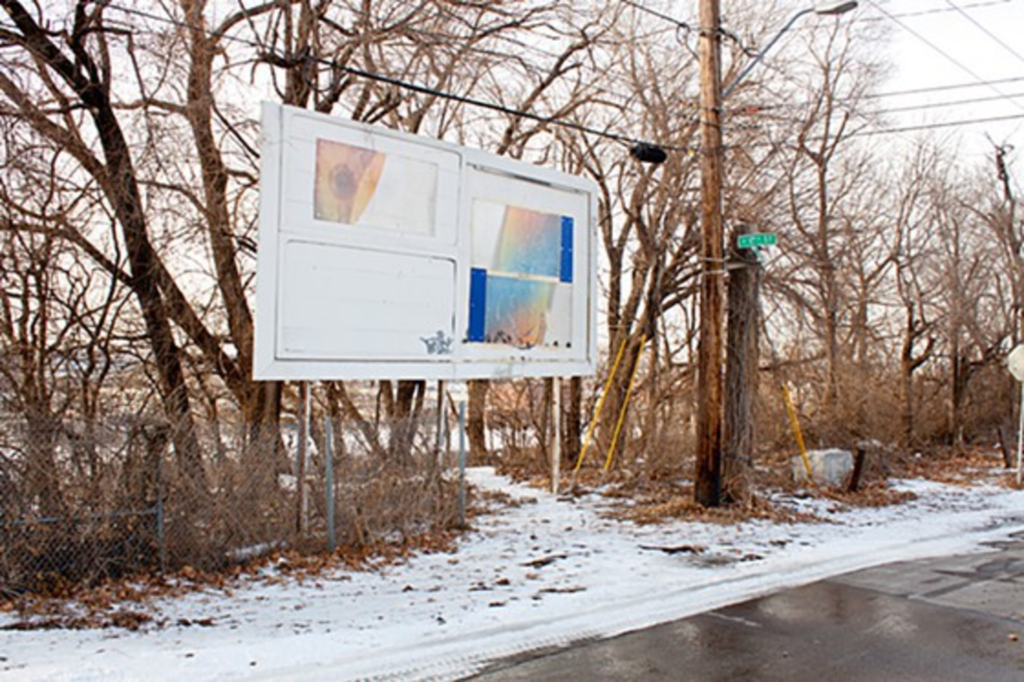 Deep inside the belly of Kansas City, Missouri’s beastly bureaucracy lies something called the Board of Zoning Adjustment. Twice a month, the BZA holds public hearings on City Hall’s 26th floor to “consider appeals from any order, decision or determination of the Codes Administrator, applications for special exceptions and conditional uses, and actions authorized by the City Council,” according to the city’s website.

Fuse the thrill of watching a council meeting on TV with waiting in line at the DMV, and you have a basic idea of what it’s like to attend a BZA meeting.

Last Tuesday, the board fought off yawns while listening to an appeal from a Northland homeowner seeking to extend the height of his detached garage. Statutes were reviewed. Several moons passed. A ruling was reached.

Eventually it was time for Israel Alejandro Garcia Garcia to argue his appeal.

Garcia is a local artist. He also runs a Crossroads gallery, Garcia Squared Contemporary, in the Bauer building. In 2006, he bought a parcel of land, roughly 25 feet by 95 feet, near the intersection of 17th Street and Beardsley Road, in the Westside neighborhood. On the lot at the time of his purchase was a structure that functioned as a commercial billboard, which Garcia has since stripped of advertisements, coated in white industrial paint, and repurposed as a canvas for his art. He says he spent about $1,500 to hang a print version of his sculpture “Salvation Tortilla” – which was exhibited at the Mattie Rhodes Art Gallery and the Kansas City Public Library – on the property back in 2008.

In other words, Garcia is engaging in, at his own expense, precisely the kind of artistic neighborhood beautification that Kansas City’s civic leaders vocally encourage. See, for example, the recent recommendations of the Mayor’s Task Force for the Arts: “Artists can often activate and enliven spaces in the urban landscape that would otherwise be vacant or un-designed. These untended spaces, public and private, are both a missed opportunity and can contribute to blight. The City can facilitate artists’ temporary and opportunistic use of such spaces and venues as vacant walls, storefronts, empty buildings, open spaces and unused billboards.”

Last June, Garcia’s print was stolen from his property. To leave outdoor advertising structures blank and untended is illegal in Kansas City. That’s a reasonable ordinance; tattered old billboards featuring law-firm hotlines and bygone summer blockbusters are an eyesore. But Garcia’s billboard is no longer commercial – it’s now a privately owned art space. Nevertheless, he soon received a letter from the city informing him that he had 90 days to put something else on the billboard.

“I called City Hall and tried to explain that it wasn’t a commercial billboard, that the property hadn’t been abandoned, that the artwork had been stolen, and that I was working to create something to take its place,” Garcia tells The Pitch. “And I asked for an extension on the 90 days, because the artistic process for that canvas is very involved. It takes me a long time to pay for a piece, to complete it, to put it up. And I hadn’t considered the possibility that the art would be stolen, so I didn’t have anything ready to replace it. So I would call every couple of weeks and update them and ask for an extension, and all I’d hear back is these cold, standoffish answers: ‘Just take care of it.’ I was never told I could file an appeal until it was too late.”

When 90 days had passed without Garcia replacing the billboard’s art, the city sent him a letter fining him and ordering him to tear down the billboard. Thus he found himself sitting before the BZA last Tuesday.

In his appeal, Garcia emphasized what he said was the indifference of the city employee to whom he had taken his concerns when notice of the fine arrived. “I made myself continually available to the city,” he said. “Nobody ever transferred me to the correct desk where I could fix the problem.”

He said he had bolted some art onto the billboard days after receiving the final notice, and that he now had three pieces of art in storage in case of future thefts. He also presented the board with letters of support from members of the Westside community, including John Fierro (CEO and president of the Mattie Rhodes Center), Melody Stutzman (principal of Altavista Middle School) and Carlos Gomez (CEO and president of the Hispanic Chamber of Commerce).

Theresa Otto, BZA chairwoman, said she appreciated Garcia’s position but noted that the board had limitations. For one thing, there is no separate ordinance for a billboard that exists as an art structure.

“By your own testimony you’ve said you received the initial letter and that you left the sign blank for 90 days,” Otto said. “I’m hearing a lot of good comments from the crowd, but this board doesn’t have the latitude within the ordinances to treat this sign different from any other sign.”

Then something unexpected happened. One of the board members, Mark Ebbitts, pointed at one of the screens projecting a photograph of Garcia’s billboard and asked, “Mr. Garcia, you see in the center panel of the billboard, that little object at the bottom?” He smirked a little and gestured at a pentagon-shaped image. “Could that classify as art?”

Garcia caught Ebbitts’ drift. If the scrapings could be called art, then the original violation might be tossed out. “I think so,” he said. “It was an attempt to do some imagery by scrapings, but I stopped.”

For a moment, the perfect loophole seemed within reach. The members of the BZA would not have to play the role of heartless bureaucrats, and the artist could keep his canvas. Otto instructed someone from the city to consult the law. “Looks like a crown to me,” she joked of the scrapings. “Maybe a teapot? It’s in the eye of the beholder. Any artist will tell you that.”

The answer came back: The board did not have the power to reverse the original violation. An unsatisfying compromise was reached. The BZA would give Garcia another six months to present a case that would allow him to keep the billboard and avoid the fine. “I’m an art lover, but we have to uphold city statutes here,” Ebbitts said. “You got the letter in time and you failed to resolve the situation.”

Maybe the whole mess could have been avoided if Garcia had just slapped something else onto the billboard in time. Something as simple as, say, a piece of red tape.