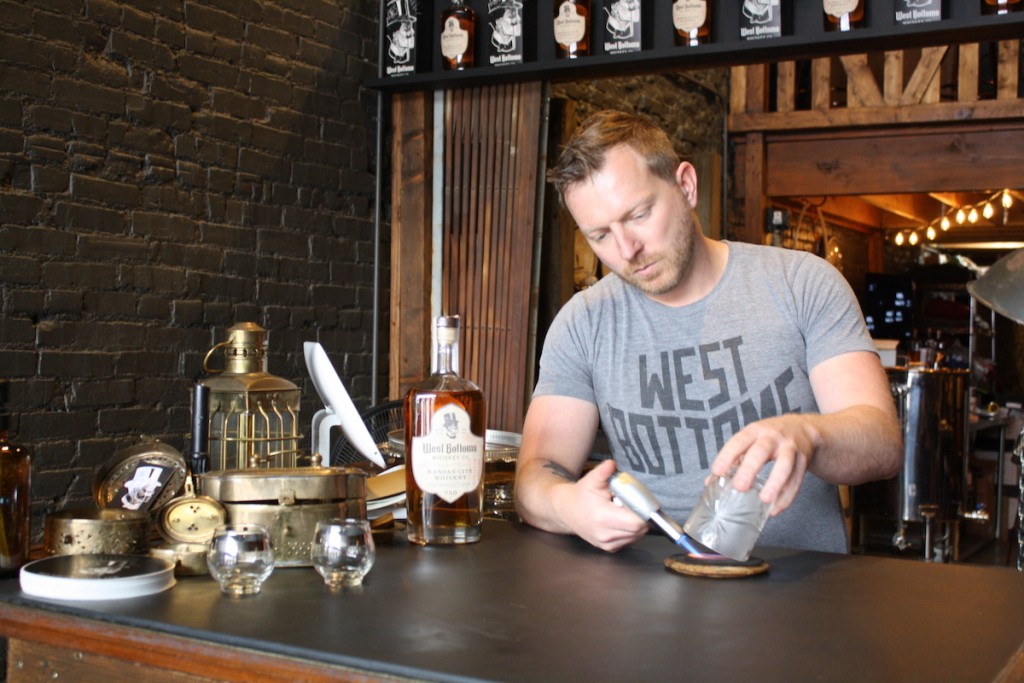 The people over at Fetch, a vintage clothing store with (arguably) the best shop front signage in the Metro area, are putting on a block party this Saturday, September 18. Co-hosting the festivities are the quality t-shirt makers at Normal Human.

The 2021 block party theme is “Waxed, Vaxed, and Ready to Party,” and in the spirit of staying safe and fun amid the pandemic, attendees should expect pop ups from a ton of small businesses, bars, and makers, as well as live music, local art, and food trucks.

Recently we spoke to two such establishments, West Bottoms Whiskey Co. and 9th and State, about the distinctive intersection of place, history, and business in West Bottoms.

West Bottoms Whiskey Co., housed in the Oliver Building on W. 13th St., specializes in a blend of bourbon and rye whiskeys with a touch of dry sherry. Inside, high ceilings curve down to meet ancient brick walls, proof that what’s now a craft whiskey distillery was once a train tunnel.

“When it was built in 1893, it was the Oliver Tractor Company,” says owner and master distiller Alex Lindsey. “Where we are now is the space where trains came completely through the building to offload [wares] and onload tractors. That’s why the ceiling’s made of metal, why the brickwork in some spots is unusual.”

If you look past the ultra-heavy wooden desk that serves as a bar counter, you’ll spot a copper distilling kettle and lots and lots of whiskey casks. The current setup is intimate, dimly-lit—like a literal passage back through time. 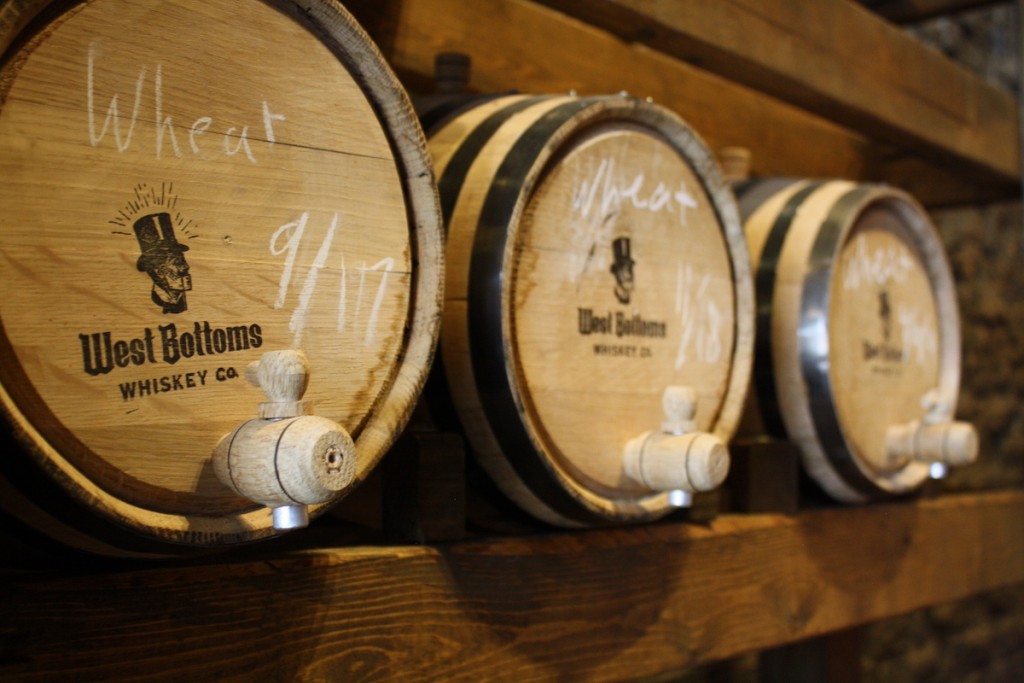 But as business expands, so must means of assembly.

“Hopefully in a month or two I’ll be moving production to the Quincy Building next door, so we’ll have more retail and seating in the front parlor area,” Lindsey says. “We’re doing about 500 bottles a week right now, but if we expand, we’ll have room for bigger tanks, bigger equipment, and a bigger still.”

Plus, there’s demand to be met.

“We’re as far west as Topeka and Wichita and as far east as St. Louis. We’re in all the major liquor stores—Lukas, Mike’s, Gomer’s. I’m humbled by the fact that they carry the whiskey.”

Who you calling Old Fashioned? // Photo by Emily Standlee

He adds: “Kansas City Whiskey is a pre-prohibition whiskey, which conjures up a lot of different imagery. I start to think about craft cocktails, but this style reminds me of the innovation and optimism of the Industrial Revolution. Hearing your loved one on the telephone for the first time, having your house lit by electricity—so many things happened in such a short period of time.”

As for the block party this weekend, Lindsey says the goal is to get people rotating around the Bottoms.

“West Bottoms has its own character,” says Lindsey. “There’s a lot of history here.” 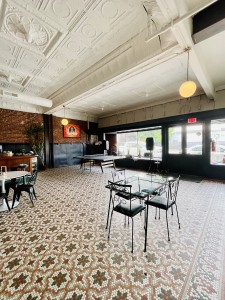 Heather and Sean, owners of 9th and State, have their own historical spot at 1717 W. 9th St.

Sean ripped up the bar’s carpet first thing after getting into the building, revealing glossy French penny tile from the early 1900s. Heather says the manufacturers would hide an intentional error here and there to prove it was their unique design.

The second floor houses a ballroom and stage where jazz legend Charlie Parker once played. There’s a dumbwaiter up there. Nobody can get into the safe by the walk-in cooler, so mysteries remain in the building.

This is all to say that the building at 1717 W. 9th has lived many lives: speakeasy, Soviet-themed hangout, swingers club, dancehall, casino, Pendergast hideout.

It’s one of the last remaining original structures on what a 1907 newspaper called the “Wettest Block in the World.” Though the bar’s metal stools survived the Flood of 1951, the nickname refers to—you guessed it—booze.

Peep the original Pabst logo in tile by the door. // Photo by Emily Standlee

“This building was constructed by Pabst Brewing Co. in 1911,” says Heather, who’s done a lot of research on the area with help from Historic West Bottoms Association president Bruce Holloway.

“It isn’t substantiated,” she adds, “but one theory is that since Pabst made beer in Kansas and no one could drink it there, they built this space right across State Line so employees would have somewhere to hang out.”

Before the 18th Amendment—and thus Prohibition—went into effect in January 1920, Kansas enacted its own temperance movement, effectively turning the state “bone dry.” Missouri, however, could still serve alcohol.

There were a ton of saloons and the fees for liquor licenses paid to the State of Missouri were paying for roads, bridges, infrastructure. Sometimes Kansas City bars were the only places around with running water.

At the time, certain journalists were comparing Kansas City to Paris and New Orleans because of its “sinful” nightlife. This from author John Simonson and KSHB.

“I think Kansas City took that as an insult,” says Heather. “But it’s not a bad thing. It’s where the term ‘Paris of the Plains’ comes from—apparently there was the same level of debauchery going on here as in Paris. The ’30s were when this place got really interesting,” says Heather.

In the ’30s and ’40s, Jim and John Pendergast turned the space into the Pendergast Brothers Saloon, which later became the Antlers Club. 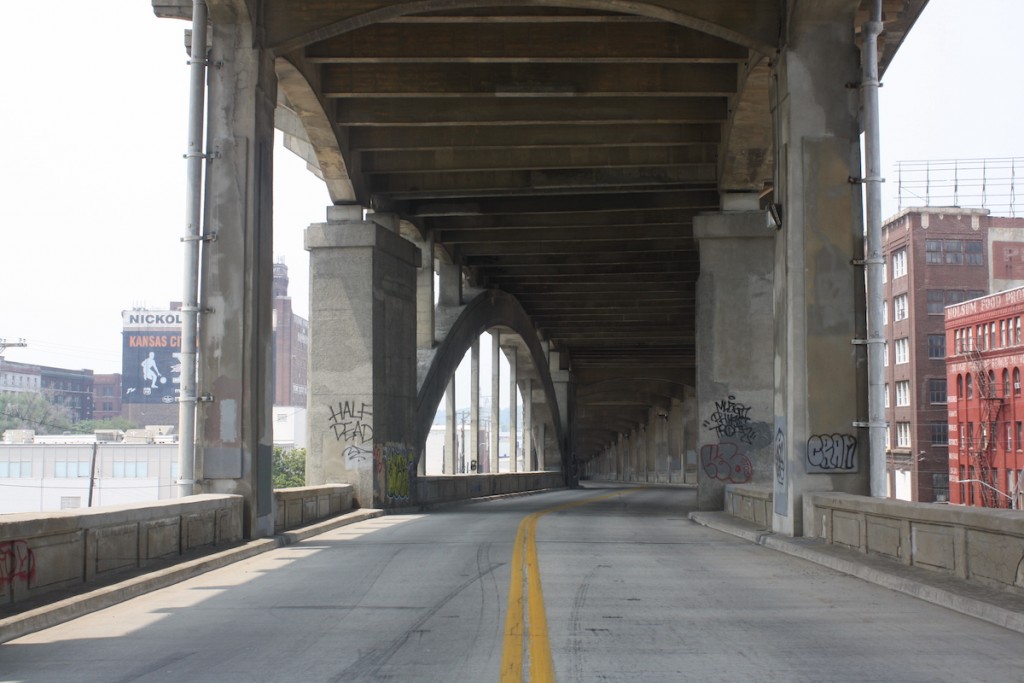 View from the 12th St. Bridge. // Photo by Emily Standlee

Booze isn’t the only thing driving it, but we hope the spirit of innovation and rebellion will always exist in West Bottoms, and in Kansas City.