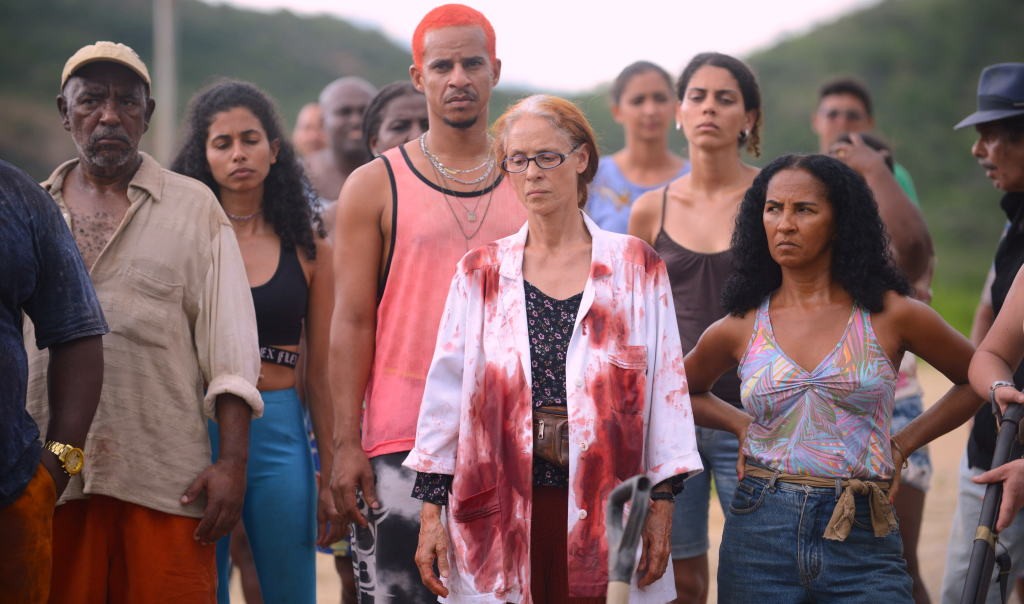 The Brazilian action thriller Bacurau started making the rounds at festivals and gaining critical support late last year. As one of several arthouse releases available to rent through Screenland Armour’s virtual screening room service, Juliano Dornelles and Kleber Mendonça Filho’s film can get the kind of international distribution it’s been sitting on the precipice of for months, but hasn’t quite achieved yet.

In fact, the timing of the movie’s release works well in tandem with the expanded online release of Blumhouse’s exploitation thriller The Hunt, as Bacurau includes many of the same plot points, but approaches them from a more social realist perspective. If you watched the Craig Zobel/Damon Lindelof/Nick Cuse movie and wished you knew more about Betty Gilpin’s character Crystal, this is your movie.

Bacurau is named for the small village it’s set in, about three hours north of São Paulo, in the near future. Bacurau is a tight-knit community, isolated from the rest of the country. The region’s mayor recently dammed up the river, so even in terms of natural resources, they are, literally, cut off, requiring regular potable water delivery to even survive.

The movie opens with Teresa (Bárbara Colen) coming back to the village in time for the funeral of her grandmother Carmelita, the village matriarch. Shortly after Teresa’s arrival, things start to get weird. The town suddenly doesn’t appear on any digital maps. The water truck shows up shot full of holes. A strange, UFO-like object starts circling the town, followed shortly by the violent murder of several villagers.

Bacurau operates like a social realist drama for about the first half hour. It then takes a sudden turn into exploitation territory, as we learn the reason behind all these awful events, and the rich stranger (Udo Kier) who seems to be behind it all. Throughout the whole enterprise, Dornelles and Filho maintain the atmosphere of social realism, spending a lot of time with the characters, exploring their relationships and way of life. Even when the action ramps up, the movie advances at a leisurely, almost glacial pace.

That might sound like a criticism, and for impatient viewers, it might be. It’s certainly an odd tone to strike for an action film. However, it’s also a fascinating experiment with genre. By investing so much time in the villagers of Bacurau, Dornelles and Filho make their lives matter, even the mundane parts. When it comes time for them to defend themselves, it doesn’t just feel like a “slobs vs. snobs” showdown. It feels like Bacurau is fighting for the very existence of impoverished rural Brazilians. If you want to extend that to people living in impoverished rural areas in other countries (say, the United States), it wouldn’t be a huge stretch.

Bacurau is a bit of an investment, at over two hours, but one that rewards viewers willing to put in the time. Right now, time is a thing we’re all in a unique surplus of. While our free time is in such massive supply, that means we can choose to experiment a little more with what we watch. All that is to say, you can afford to give a strange, interesting movie like this a shot, and support a local business while you’re doing it. You now have zero excuses. Go watch Bacurau.