On Wednesday, October 1, a disgruntled hungry person left a heated one-star review of West Bottoms eatery Voltaire on Yelp. The reviewer, Sonal B., accused Voltaire of being the “most unfriendly and arrogant restaurant in KC,” mostly because the place had refused to provide take-out. There’s nothing too extraordinary about the review, but Voltaire’s owner, Wes Gartner, felt the need for a rebuttal.

On Thursday, October 2, Gartner posted a lengthy response to Sonal B.’s review. The exchange is preserved in its entirety here on imgur. (Sonal B. has since removed the review and closed her Yelp account.) Here’s an except from Gartner: 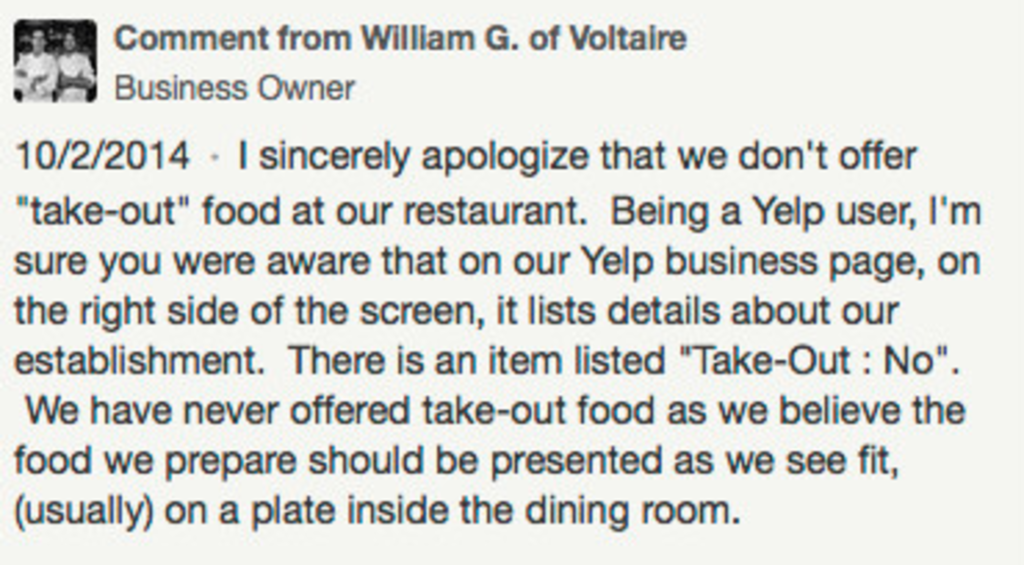 Over the weekend, the Internet latched on to the exchange, and it has since gone viral. (Friends in other states have probably forwarded you the link already, haven’t they?)

“It’s become a little overwhelming,” Gartner tells us over the phone of the response he’s gotten since posting to Yelp. Notes of support have come in on Voltaire’s Yelp page, through the restaurant’s social media platforms and in e-mails. “The response has been 99.9 percent positive,” Gartner continues. “There have been, like, a couple e-mails that have come through that say I’m being a pretentious jerk, but that’s one or two for like a thousand [positive ones].”

Gartner says his response had a motivation beyond defending his restaurant.

“I think a lot of people on Yelp say things sometimes that are sort of outlandish, and servers and people in the restaurant industry get frustrated because they feel like they can’t say things without seeming like they’re whining or taking it personally,” Gartner says. “So I just thought I’d see if there was a way of calling her out on her ridiculousness and inaccuracies.”

We reached out to Sonal B., who did not respond to requests for comment.