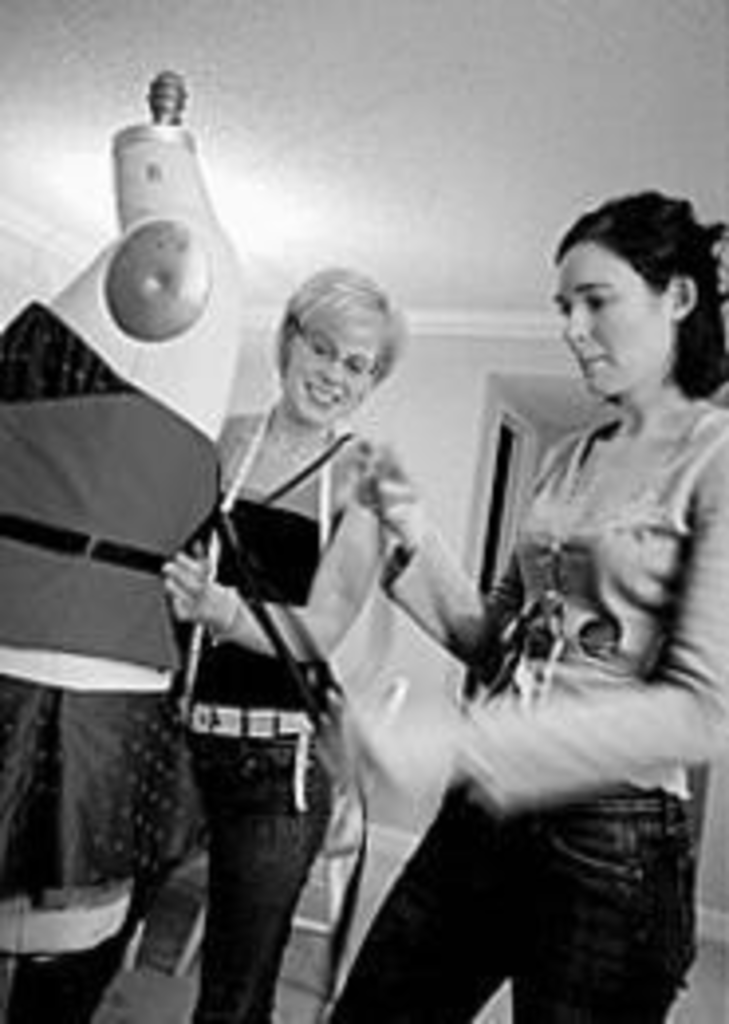 If Victoria has a secret, I’d love to hear it. I’m simply dying to know what sort of information might be considered private by someone who doesn’t mind displaying her collection of G-strings for window shoppers.

Other questions I have for her: Why does the blue pajama shirt with green lettering say “PINK”? And for whose benefit are the framed black-and-white photographs of models wearing Victoria’s Secret undergarments? For the female shopper who plans to wear these items herself, this is not good company. There is no woman with whom I’d less like to share a dressing room than a digitally retouched, professionally lighted Victoria’s Secret model.

In honor of the Valentine’s Day lingerie-buying frenzy, I had hoped to find the answers to these and other retail mysteries at the Plaza store. But Victoria’s secret was well guarded by an army — a cup-size-deciphering CIA — of young women wearing headsets. Not only was I incapable of eavesdropping on the quiet-talking shoppers in the store that day; the saleswoman I talked to informed me that she was not permitted to disclose any of the information I wanted. She politely scribbled down the toll-free number for client relations and sent me on my way.

After such impersonal treatment, I decided to direct my more intimate inquiries to local lingerie designers. After all, Kansas City gallerygoers and the DIY set embrace arty underwear more openly with every passing year. At one tattoo-themed fine-art exhibit at the Green Door Gallery, I even bought some dainty, limited-edition pink underwear by Peregrine Honig. (The lace-trimmed garment, “tattooed” with a less-dainty banner that says harder is tacked, unworn, to my wall.) Since then, Phil Shafer — that is, Sike Style, maker of hip-hop hoodies — has finally caved in to the demand for hip-hop undies. He used to feel funny about selling panties that would put his logo on the rears of his peers, but you gotta give the people what they want. And what they want appears to be really stylish underwear. Even if nobody’s going to see it.

The “Sophie and Gwendolyn” line of one-of-a-kind, handmade undergarments has oft beckoned me from the window at Birdie’s. It’s created by Amy Schlabach and Wendy Gillman — but erase from your mind all images of hipsters, with their asymmetrical hairstyles and fluorescent forearm warmers, jumping on the hand-crafting bandwagon. Replace this image with two women so utterly sincere in their love for beautiful, frilly things that you are tempted to wrap them in a bow and send them to your mother as reparation for refusing to set your hair in rollers like she taught you.

For their weekly Tuesday-night business meetings at Gillman’s Overland Park apartment, the two women set out trays of bite-size cheese and sausage, surrounded by a lovely display of crackers, and they drink red wine out of real, matching wineglasses. It is thus that the modest and practical, pants-wearing Amy and Wendy transform into their more princesslike alter egos, Sophie and Gwendolyn. Sophie is the name Amy pulls out of the air when she’s being hit on at a bar and doesn’t want to reveal her real name. Wendy used to pretend that her fast-food-connoting first name was short not just for Gwendolyn but for Gwendolyn Lynette. “Everybody used to have those short names that stood for glamorous longer names, and I wanted one,” she says.

The point of making girly lingerie is twofold for Sophie and Gwendolyn. First, they like to use old-school, custom dressmaking techniques — each has been sewing since grade school, and they learned the old-fashioned way. Making a whole dress using time-consuming, hand-embellishing techniques and fine materials is expensive, though. Lingerie uses these same techniques but doesn’t demand a huge investment. Besides, buyers appreciate old-fashioned dressmaking techniques such as lace-up enclosures when they’re shopping for bustiers and corsets. For outerwear, not so much.

The other thing they enjoy about it is making other women feel sexy. The two hardly even think about who’s looking at the women wearing their underwear sets. They’re trying to please the women themselves.

“We get to hear about the customers and about how they feel trying on the stuff we made,” Gillman says. “It’s so great to be, like, ‘Wow, I really made another lady feel sexy.'”

Sometimes the lingerie wearer is the only person whose opinion really counts. In fact, there is nothing unusual about wearing lingerie for reasons that have nothing to do with sex. A recent informal poll of my female friends revealed that it is quite common for women to put on slips (and loud music) to do housework. Scrubbing bathroom floors feels less frumpy that way. It’s a practice that one theatrical barista, Laura, recommended one day when I informed her that I was not looking forward to going home and mopping. She didn’t know that I had already fully embraced the practice on my own. Another friend, Jenn, a painter, wears slips around the house for all occasions. “I have a separate wardrobe for my underwear,” she confides. “I even have all kinds of old stuff, like a whalebone bra, in my collection.”

She thinks the appeal of doing housework in slips might have to do with a desire to romanticize earlier time periods. “There’s something sexy about feeling like a 1950s housewife when you don’t really have to be a 1950s housewife,” she says with a chuckle. But she also thinks there’s something to be said for feeling like you look good, even if you’re doing dishes, even if nobody’s there to see it. Sometimes you put on a show for yourself.

“It’s better than being naked,” Jenn says of wearing a really good slip.

And that is exactly how it should be.