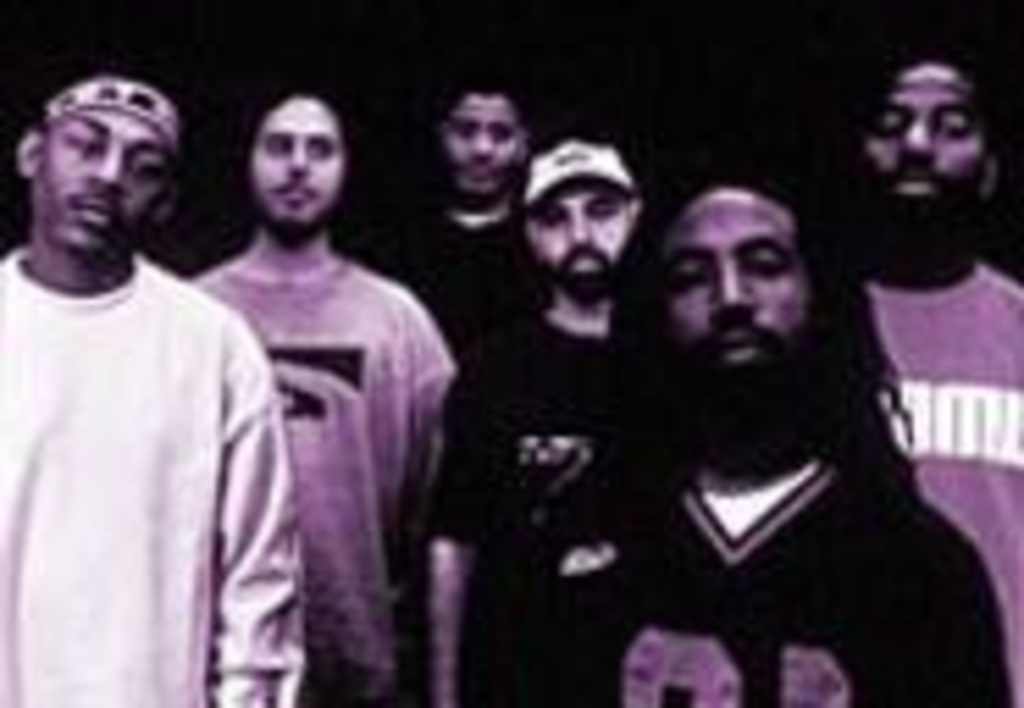 “Old school” is a term that gets tossed around when describing everyone from football tough-guy Ronnie Lott to law-talkin’ nice guy Andy Griffith, so it’s understandable that certain members of the nation’s hip-hop community get a little perturbed when tagged with the title. To some, it implies imitation or, even worse, weakness. But don’t tell that to the Jurassic 5. If the group’s name doesn’t tell you enough, this old-school sound — like a ’78 Caddie: the raw, creaky, cranky, funky kind of old school — is exactly what MC Chali 2NA and the J5 are going for.

“To us that’s a compliment because we pattern ourselves after the groups that we were influenced by, like Grandmaster Flash and the Furious Five, the Cold Crush Brothers,” says 2NA before rattling off a host of other names the members of the J5 weren’t alive to see. What the four MCs and two DJs were around to witness in the mid- to late-’80s was a developing style influenced by these groundbreaking crews to be sure — but one that placed far greater importance on radio and video spins and especially the material things. As such, Grandmaster Flash’s life in “The Message” had turned into Easy E’s rapper’s delight, where life ain’t nothin’ but bitches and money. So in a sense, says 2NA, the Jurassic 5 are turning back time.

“When we got older, we were in love with what hip-hop was about back then: Your show had to be your video, and what you did on the stage is what represented you,” he says. “That’s where we’re coming from.”

And Chali 2NA (pronounced Charlie Tuna) has a simple explanation for how and why the rap game strayed whence it came. “As a black youth growing up in the ghetto, you hear the options for escape are, ‘becoming some type of entertainer, some type of sports star, or selling drugs.’ When rap became one of those three things, it became the focus on money … and people got platinum hits without having to go on tour and didn’t have to display the skills they were claiming on their records — and a lot didn’t have them.

“So that’s exactly where those old cats influenced us, in our live show. Back then hip-hop had a certain ethic: You respected the guys that were good and you strived to be as good or better as those guys, and that was the show.”

The Jurassic 5 honed those skills for four years at the Good Life Café in L.A., where you got one song a night (no cussing) and if the crowds didn’t like it, they didn’t hesitate to let you know. “That was college for us,” says 2NA now, some seven years later.

But coming from that far back almost hurt the group, as this self-imposed duty placed an emphasis on touring and satisfying the fans with live shows while releasing only one eponymous EP — until the recent circulation of their anticipated full-length debut, Quality Control. Still, all that live playing has paid off in some unlikely places, such as an odd coupling on the Fiona Apple tour.

“We got to see all different crowds there,” admits a laughing 2NA, “but nobody booed us. We sold lots of merchandise and got a lot of older and younger fans who have never been exposed to hip-hop before that liked what they saw. Like older people came up to us saying, ‘I’ve never seen anybody spin on their head before’ and ‘I’ve never heard anything like this,’ like they’d always stereotyped it and wrote hip-hop off. But we introduced them to what it’s really all about, and that was the best compliment.”

Another solid compliment from Apple’s antithesis, but one that seems just as unlikely, came in the form of the Jurassic 5’s getting the nod to play on this summer’s Warped Tour (the outdoor testosterone-fest where Kid Rock and Limp Bizkit came to national prominence). Although this summer’s tour will be drastically more diverse than in past years, the aura of rap-rockers alone makes it all the more odd that the Jurassic 5, who pride themselves on their rootsy style, would want to be associated with bands that some see as committing the same thievery on hip-hop that their ancestors did 40 years ago with rock and roll. Not so fast, says 2NA with a long pause after referring to Limp-Rock as “rap and roll” acts.

“Back in the day when rap was really starting to get its little shine, with Run-DMC and everything, all the b-boys and b-girls around the world was complaining that there wasn’t enough representation of hip-hop on TV and radio and in other forms of entertainment or music. Now rap has touched damn near everything, and that’s what they wanted,” 2NA says before revealing that he went to junior high school with Bizkit’s DJ Lethal. “But now Limp Bizkit, Rage, even The Deftones all represent the different aspects of what rap is now, and it touches people that wouldn’t normally listen to rap.”

So asking 2NA for a fair assessment of Limp Bizkit is like asking Jason Whitlock about quarterback Jeff George. But surely 2NA, an MC who also plays with the multiethnic funk confectioners in Ozomatli, could critique Kid Rock, a man with a long list of enemies topped by music critics and fans of “old-school” hip-hop, right?

“I wanted to be offended when I first met him,” 2NA says of his stint with Ozomatli on last summer’s Warped Tour. “But I couldn’t. I had to give it to him. This dude is extreme live, and I can’t front on him. He can play every instrument, and he can DJ like I don’t know what. He’s got some vulgar lyrics, but he can hold his own on the mic.”

Don’t be discouraged, though: Even 2NA agrees that some of his mates in the J5 would side with some critics on the issue of rock. Besides, the Jurassic 5’s current tour (with Black Star’s Talib Kweli and Dilated Peoples) doesn’t feature a moody waif or future trailer-park super, at least not on stage. So for many, this is the annual opportunity to catch the group untainted by the forces of mainstream music, or, as 2NA says, this show’s for “anybody who likes hip-hop that makes you feel good on the inside.”


Friday, May 5at The Granada