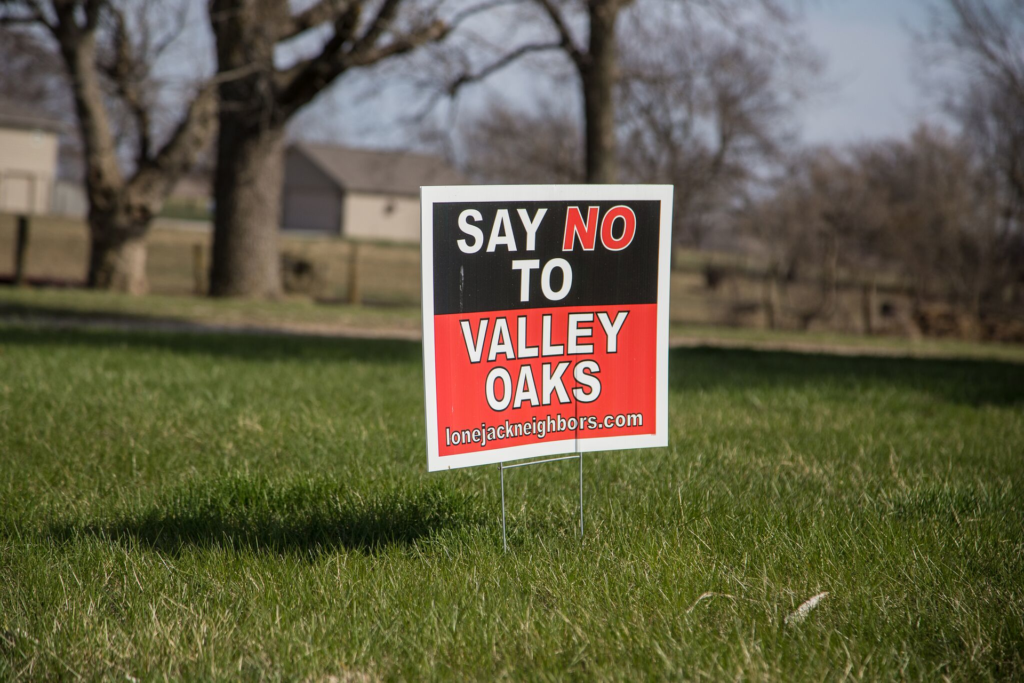 Powell Gardens and Lone Jack neighbors jumped a big hurdle Tuesday when a state commission recommended that a permit allowing the construction of a $30 million cattle feeding operation be reversed because it violates Missouri water and permit laws and regulations.

The appeals case will now move to the Missouri Clean Water Commission for a final decision by Dec. 23.

In June, the Missouri Department of Natural Resources issued the permit to Valley Oaks Steak Company located on Highway 50 about three miles from Powell Gardens and the town of Lone Jack to house and feed up to 6,999 beef cows in a confined area.

The permit shocked many in Missouri, not only because of its vicinity near the botanical gardens that holds wedding ceremonies and has 100,000 visitors each year but because about 900 homes are within a three-mile radius of the feeding operation. Huge confined animal feeding operations — it’s believed that this cattle feedlot will be the largest in Missouri — produce gut-wrenching odors that travel miles, pollute the air and waterways, draw hordes of flies and other insects, and depreciate property values.

After the permit was issued in June, attorneys for Powell Gardens and Lone Jack Neighbors for Responsible Agriculture immediately filed appeals to the Missouri Administrative Hearing Commission, the first leg of the appeals process.

The commission said Tuesday that Valley Oaks’ plan to spread manure on nearby farmland was not based on “realistic data” and would likely result in contaminated water. In addition, among other violations, Valley Oaks did not have adequate storage for the 290 tons of manure per day that the cattle would generate when at full capacity, or 106,000 tons of manure each year.

Indeed, the company that is listed on the permit, Country Club Homes LLC, isn’t even registered with the state, which on its face makes the permit invalid under state law, the hearing commission report said.

“Powell Gardens is thrilled with the outcome after careful deliberation by the AHC,” says Tabitha Schmidt, CEO and president of Powell Gardens. “We are now calling on the Missouri Department of Natural Resources to step in and revoke the current operating permit.”

DNR officials did not respond to a request for comment for this article. At Valley Oaks, a man who answered the phone and identified himself as Jake said he would not comment, added “Have a nice day,” and hung up. Valley Oaks operation manager and spokesman is Jake Huddleston.

Later on Wednesday, Valley Oaks issued a statement to the media, saying it believes it is in compliance with state laws and regulations regarding the permit and the environment.

“We believe that the recommendation is contrary to the law and the evidence,” the statement read. “We are confident the (Missouri Clean Water Commission) will agree with the experts at the Department of Natural Resources that we met or are exceeding all of the permitting requirements.”

More than a year ago, Valley Oaks owner David Ward, a Grain Valley real estate developer, began the paperwork to obtain a permit that would allow him to grow his herd of cows from less than 1,000 to a size one-less-than 7,000. (A herd under 7,000 faces less stringent pollution laws in Missouri.)

Even though he did not yet have a permit, Ward also began constructing open-air barns to house the cattle. But Ward failed to notify neighbors about his plans, as state regulations require, the commission said in its report on Tuesday.

Indeed, by the time DNR issued Valley Oaks a permit in June, Ward had already sunk $20 million into the project, built four barns, and had approximately 1,900 cows. Attorneys for Powell Gardens and Lone Jack neighbors petitioned for a stay from the commission while the appeals were ongoing. In July, after a hearing, the commission granted the stay, saying the permit was deficient and appeared to violate state environmental standards. During the hearing, Ward complained that a stay could mean a bankruptcy, but the commission responded with a buyer-beware type warning, saying “the lion’s share of the costs” occurred before the permit was issued. The stay meant that Valley Oaks — since it had no permit — should cut its herd to no more than 999 cows to be right with Missouri law.

But Missouri Attorney General Josh Hawley put the skids on the stay when he jumped into the fray and sided with DNR against the administrative hearing commission’s ruling.

To void the stay order, Hawley sued the commission in state court in Jefferson City. That case is ongoing, and Valley Oaks has continued to expand. The herd is now believed to be up to 3,000.

Meanwhile Powell Gardens, which is located in Jackson County, has filed for its own injunction to stop Valley Oaks’ expansion.

The contentious battle appears to be a long way from finished.

One of Lone Jack neighbors’ attorneys, Stephen Jeffrey of Chesterfield, says his clients were delighted when they got the news Tuesday.

“It’s good to have the commission agree with you that there were significant problems with the issuance of the permit,” says Jeffrey who has several other clients around Missouri who are fighting large confined feeding operations. “Valley Oaks is the most egregious of those cases because they made the decision to build in this heavily populated area.”

Jeffrey pointed out that a bigger battle is looming for Powell Gardens and nearby residents of Valley Oaks when the appeal reaches the Missouri Clean Water Commission, whose decision would be the state’s final step in the state’s appeals process.

The little-known seven-member water commission made headlines in 2017 when former Gov. Eric Greitens stacked the commission with farm-friendly allies.

State law had mandated for years that a majority of the commission be representatives of the public to ensure protection of Missouri’s waters. But an amendment slipped onto a bill that passed the legislature in a harried end-of-session in 2016 changed that requirement, allowing the four-member majority who represent the public be replaced by representatives of agriculture and mining.

Former Gov. Jay Nixon at the time worried that the bill, which he vetoed but the legislature overturned, would hand oversight of clean water to the industries that pollute it.

Today five of the six water commissioners (one seat is vacant) are:

Last December, the new, farm-friendly clean water commissioners voted 5-0 and 4-0 to allow plans for a chicken and hog feeding operation to go ahead. Permits for the two farms had been denied by former commissioners in 2016.

“We believe the (hearing commission) has interpreted Missouri law correctly and has reached the right outcome for the Gardens and area residents,” Davenport said in a news release. “We are hopeful that the (water commission) will respect the recommendation of its hearing commission in deterring that this CAFO is not lawful.”