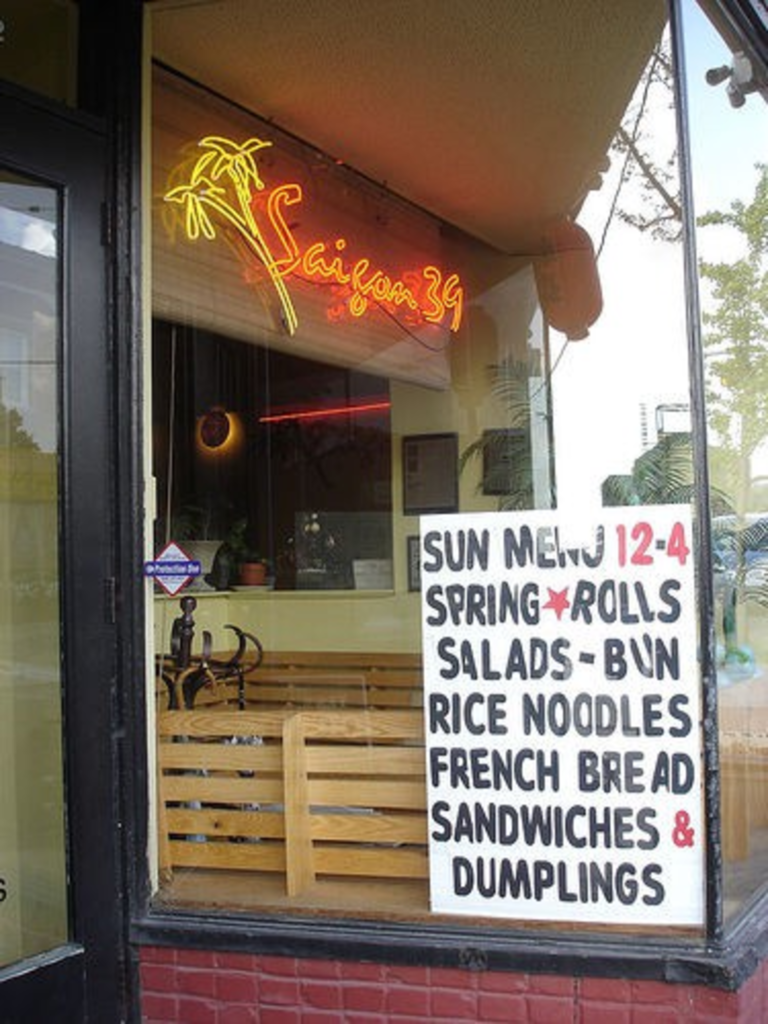 Update: The operators of Saigon 39, Linda Bruce and Victor Perkins, the children of restaurant founder Mimi Perkins, spoke with The Pitch, about closing the restaurant. See the update after the jump.

The windows at Saigon 39, at 1806 West 39th Street, are covered with paper, and the news for fans of the popular Vietnamese restaurant isn’t good: The restaurant-row fixture is done.

The voice on the restaurant’s answering machine is that of Linda Bruce, the daughter of the restaurant’s founder, Mimi Perkins. After the usual greeting, Bruce’s voice says: “The dining room has closed permanently. For information about spring roll trays, catering or bottles of Mom’s famous peanut sauce, leave a message.”

Saigon 39 has been managed and operated by Linda Bruce and her brother, Victor Perkins, for many years — Mimi retired but would make occasional forays into the restaurant to check on things.

“When my Mom started the restaurant in 1992,” Victor Perkins says, “she had all four of the children helping her almost every day. But with Linda and I trying to run it ourselves, there would be many times that I was in the back cooking and Linda came in to help, so that there wasn’t a family member at the front of the house. Our customers come in because we’ve always been a family-run restaurant. It just didn’t have the same feel as it did when our family was all there working.”

“I have three young children now,” Linda Bruce says. “And I live in Olathe. It was becoming increasingly difficult to juggle the demands of the restaurant and be available to pick up my children. We felt it was time to focus our business in a different direction.”

To that effect, Bruce and Perkins plan to expand the catering business and begin marketing the Saigon 39 peanut sauce and, possibly, the signature spring rolls, to supermarkets and specialty stores.

“A lot has changed about the restaurant business since we started,” Perkins says. “We never had a liquor license, and that was becoming a challenge, especially for a mom-and-pop kind of restaurant. I know people are sad about our closing, but we’ve been here for a quarter century. It was hard for Linda and I to be here all the time. There were nights I slept in the restaurant so I could be here the next morning to open up for business.”

“We’re just re-engineering our brand,” Bruce says. “That way we can work smarter, not harder.”