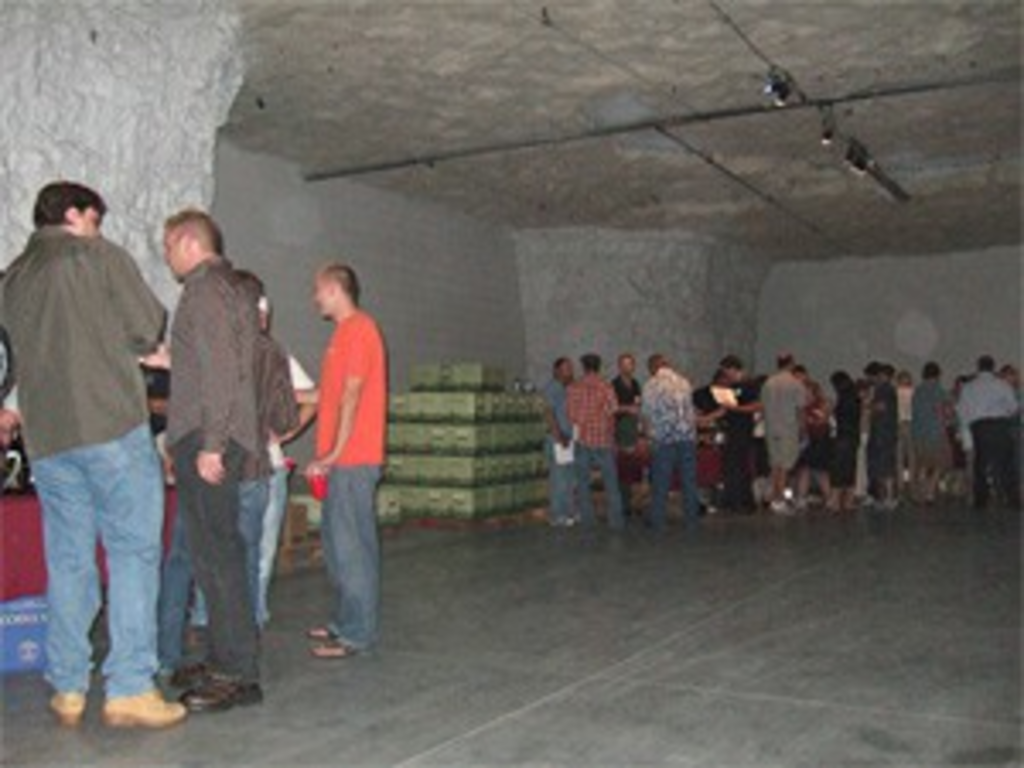 Cave drinking isn’t really a new idea in the metro. There used to be a restaurant in Lamar Hunt’s SubTropolis complex in the Northland. But according to a 1998 Wall Street Journal article, “After a lot of food and drink, departing patrons tended to get lost; one man was shaken but unharmed after he accidentally drove off a 4-foot-high loading dock.” So as I prepared to make my own underground drinking foray, I made a mental note not to drive off any docks.

My drunken spelunkin’ booze trip came thanks to an invitation from Worldwide Wine and Spirits, a four-year-old company that distributes boutique wines and liquor to Kansas stores and restaurants. The company held an open house on a recent Wednesday evening at its offices, located in an underground office park in Lenexa.

I arrived at the mouth of the cave around 6 p.m. and maneuvered the Night Rangermobile inside and among the massive craggy limestone pillars. The road was covered in smooth concrete, and fluorescent bulbs illuminated the space. The layout looked to be in a grid pattern, so I parked on a side street and walked over to Worldwide, which is 90 feet below ground.

Worldwide’s main room is immense, with high ceilings and track lighting that casts a warm glow. Beer, wine and liquor brewers had set up tables to dispense their wares. Pallets laden with bottle-filled boxes lined the walls. I got a couple of samples of white wine, then decided I needed to visit the smorgasbord of hot and cold foods in one nook. The buffet area was lined with Halloween knickknacks, including inflatable ghosts and a skeleton popping out of a treasure chest.

After dinner, I wandered over to the beer guys, who took up one corner. I sampled some of Delirium’s Gouden Carolus Grand Cru, which contains 10 percent alcohol. A nearby guy in his 40s was working his way through all of Delirium’s offerings. He commented to the beer guy, “I shouldn’t have drank 13 Budweisers before I came.”

The open house attracted two kinds of people: those who carefully studied the price book and dumped out the majority of their samples into the pitchers on every table, and people like me, who disregarded said pitchers.

I started chatting with a guy named Shannon. The 26-year-old works at Kelly’s Liquor and said his boss brought him to the party so that he could taste stuff to recommend to customers. “I started out fast, then was like, whoa, slow down,” he said about his drinking pattern that night. Yeah, I could relate, so I started pacing myself. At the end of the night, I ran into him again and asked which drink was his favorite. He replied, “All the hot boys walking around.”

Over at the tequila table, a stylishly dressed couple warily eyed the selections. Nicholas and Gena, both 26, stressed that they were not an item. They were each other’s default dates for couple-y events. Gena works for a doctor who is friends with the Worldwide owner; she said her office and even some patients had come out for the open house.

I asked if they had any tequila stories. “I love tequila, basically,” Nicholas said. “It makes me feel sexy when I drink it. I may have an addiction to tequila. My courage comes up.”

All Nicholas would say was that he drank some tequila at the wedding of Gena’s boss’s daughter. The result? “I talked and danced with people I probably had no business talking and dancing with,” he concluded. See? Everyone has a good tequila story.

Located next to the tequila table was the only local brewer at the party. Atchison’s High Plains Distillery uses local grains and the area’s limestone-hardened water to make two types of vodka and whiskey, sold under the label Most Wanted. It’s also contracted to make Evil Monk’s coffee-flavored liqueur.

High Plains owner Seth Fox says he comes from a long line of North Carolina and Kentucky bootleggers and is the first in his family to brew the stuff legally. He says his company made the first legal bottles of liquor in Kansas after Prohibition. Fox attracted a steady crowd all night to his table, which he shared with Evil Monk owner Sean Combs.

I soon ran into James and Jarnaid, who own K-7, a liquor store in Shawnee. With them was Kara, whose first words to me were “I don’t own a liquor store or a restaurant!” Her husband went to Shawnee Mission South High School with 38-year-old James. They call each other Southies, as in Good Will Hunting.

James lauded the cave’s selection of Italian wines. He also said Most Wanted was the second- or third-best-selling vodka in his store. “It tastes as good as Grey Goose but is a third of the price,” he said. In fact, the bottle of Seth’s high-end vodka — named Fox Vodka — features an illustration of a fox with a limp gray goose in its mouth.

We all ended up by the High Plains table. That’s where we saw two youngish-looking duders. One sported a backward baseball cap. The other rocked the spiky hair and a brown striped shirt that was unbuttoned to his midchest; in his pocket were two cigars with Evil Monk bands.

Because both guys looked really young, Kara asked Spiky Hair’s age. He pulled out his ID, which said he was born in 1982. “You have a mullet!” she said when she saw his driver’s license picture.

“You’re slightly annoying us,” Spiky Hair said. In the meantime, I asked the other guy if I could interview him.

“My brother’s been in The Pitch, like, 90 times. He’s an anarchist. Put this in the Pitch: His brother’s a booze hound. I like the sauce!” replied Backward Baseball Cap.

By then, I had no idea just how long I had been underground. Time — as well as my cell-phone clock — had ceased to exist for me. So I said goodbye to my new friends and headed back into the world. Thankfully, I made it out without driving over any loading docks.