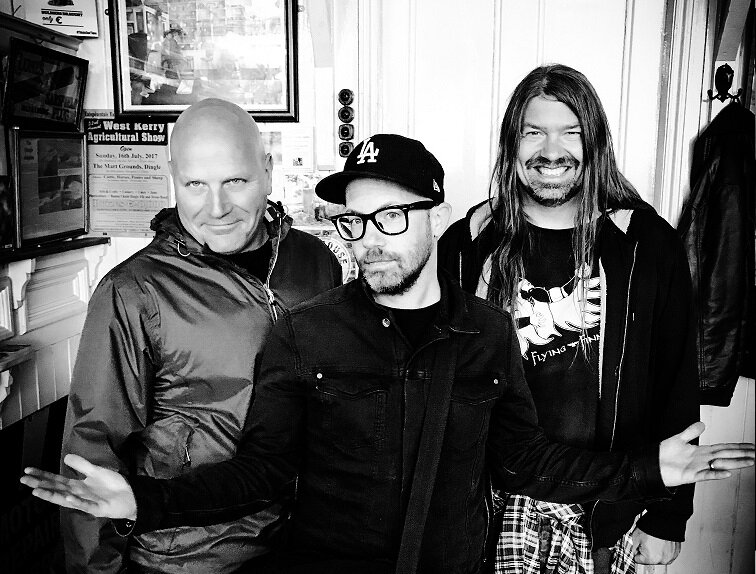 On April 10, Manhattan, Kansas, power pop trio Ultimate Fakebook return with The Preserving Machine, their first album of all-new material in over 16 years (read our review here). Last Friday, they also released their first music video in nearly two decades for the album track, “After Hours At Melin’s.” It’s an ode to the afterparty, something which had a tendency to happen a lot after UFB hometown shows. I may or may not have hazy memories of drinking PBR in someone’s living room while engaging in 3am group singalongs to songs like “Beth” by KISS.

Chockablock with riffs, pop culture references, and air guitar, the new track pays homage to one of UFB’s biggest influences, Cheap Trick. To celebrate the video, viewable below, we had the band’s frontman and guitarist, Bill McShane, and drummer Eric Melin rank their top five Cheap Trick cuts, as well as discussing the Trick’s lasting impact on UFB.

“Cheap Trick’s influence on our band can be directly evidenced by anyone who saw us on tour with “The Rock Box”. It was a makeshift, raised light upstage complete with a smoke machine that we utilized for guitar solos and general show mayhem. We got the idea for it when we saw Cheap Trick live and Rick Nielsen would jump up on a metal box that lit up and blew smoke when he would solo. We love their attitude, that a rock show should be a joyous, rowdy, and fun event!

And since Cheap Trick has a big shout out in this song, we knew it was only fitting for me to dress as Rick for the guitar solo!”

5. Downed
This one is just so memorable and — unlike any other song — it just sort of defines how cool and deep Cheap Trick are willing to go.

4. Dream Police
Good god, this song is fun. This song feels, to me, like what the movie Ghostbusters is and wants to be — a perfect pop culture moment, in this case, encapsulated in a three-minute pop song. Does that make sense? Maybe it does to someone.

3. Southern Girls
One of the best power-pop choruses ever. If this chorus doesn’t make you wanna dance or rock out you are 100% dead inside, without a doubt.

Bonus: check out UFB doing this song with the Creature Comforts’ JD Warnock on lead vocals during a show at the Bottleneck in 2017.

2. Voices
The melody in this song can not be matched. It brings me to near tears every time I hear it. My friend Möt had his first dance at his wedding to this song and that’s when I realized he truly was the coolest motherfucker on the planet.

1. Tonight it’s You
This one is my favorite because when the chorus hits, the way they modulate to a different key makes that simple and heartfelt melody and lyrics, “All I want is a place in your heart … to fall into” lights up every single hair on your body, and a shiver of chills shoots through you like a gorgeous lightning bolt. It’s literally one of the best choruses of all time. This is what it’s all about, songwriting-wise, if you ask me.

“There’s WAY more rock n’ roll/movie/comedy references in the song lyrics and music video but I love that you’re focused on the Trick. Opening up for them at the Blue Note in Columbia was a UFB dream come true. Nielsen introduced us as “The Ultimate Fake Orgasm Book” and we almost peed our pants.”

5. I Can’t Take It
“I Can’t Take It” is a stunning, sunny little 80s pop masterpiece written by Robin Zander (who usual songwriter/guitarist Nielsen introduces every night as “my favorite singer in the whole wide world”), who has some of the oddest and unexpected vocal phrasings throughout the verses. It sounds like the melody is turning in and out of itself. It also has a middle 8 that rivals The Bee Gees’ highest disco yelps and Paul Stanley’s high-pitched “I Was Made For Lovin’ You” bridge crescendo, yet somehow when Zander does it, it feel like second nature. “Of course the song was gonna go there!” Goddammit, I love this band.

4. Say Goodbye
“Say Goodbye” from their 1997 self-titled album, and 13th studio record overall, would have been a huge hit if back then if it was coming from a new band. Bands with five decades of relevant songwriting are few and far between and there’s no way for taste-makers to wrap their head around a track brimming with that much heart and that many hooks. We played that record at the college station I used to work at. On my last night DJing, I hit “repeat” on that whole CD and left the studio with it still playing instead of signing off for the night. It felt real, real good to say goodbye that way.

3. Oh Candy
“Oh Candy” is one of the best power-pop songs ever written, right up there with anything Big Star or Badfinger did. It also has that perfect melancholy to it. It’s about a friend (initials and nicknamed M&M, hence “Candy) who committed suicide and it manages somehow to be both a wistful celebration of their friendship and a tearjerker about what it must have been like to be in his shoes. Oh yeah, and it’s chock full of hooks in just over 3 minutes.

2. He’s A Whore
“He’s a Whore” features one of the best riffs of all-time, hands down, and Rick Nielsen’s batshit furious guitar solo is a huge fuck you to all the technical guitar wizardry of the time, where everyone went all proggy and wrote songs that lasted 12 minutes. Plus, you can’t beat a song where the singer screams “I’m a whore!” at the top of his lungs during that crescendo. We used to cover this, and I know it made Bill feel weird to sing that, ha! People who don’t understand Cheap Trick think they’re just “I Want You to Want Me” and “The Flame.” This tune’ll knock that thought right outta you, quick-like.

1. Surrender
“Surrender” is my favorite anthem ever, hands down–which is weird, considering it’s got some of the most bizarre lyrics ever heard in a mainstream rock hit. Supposedly, the song is from the POV of a kid singing about his G.I. parents (which explains the bit about the “WACs in the Philippines” in the second verse). For me, it’s all about how your parents were freaks once too. It creates this common bond that makes your own confusion OK. By the time “Mommy’s alright, Daddy’s alright” turns into “We’re all alright, we’re all alright, ” I can hear the crowd chanting along like I’m there. All of a sudden, “Surrender” is all-inclusive. We’re all in this crazy-ass shit-storm of a life together and at this moment, singing along with Cheap Trick, everything is OK. It’s a fleeting moment, but it never fails to get me off my feet every time.

Ultimate Fakebook’s The Preserving Machine is out via Sonic Ritual Recordings on Friday, April 10.