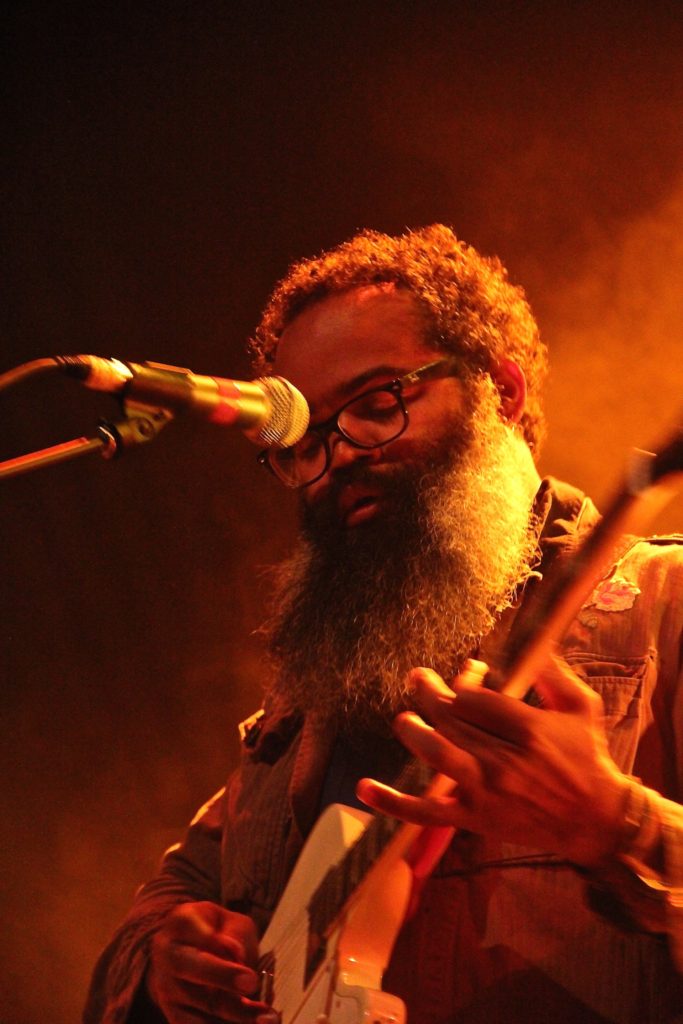 After TV on the Radio’s bassist and producer Gerard Smith passed away from lung cancer in 2011, the band was so heartbroken that the fate of the group remained unclear for some time. In the ensuing few, years the group’s members started new projects. Occasionally, a TV on the Radio song trickled out here and there. It wasn’t until last summer, when the announcement came that a whole new album was forthcoming, that TVOTR fans could breathe a sigh of relief that the act would at least continue to exist – even in its changed form, without Smith.

While Seeds features a larger pop presence than the band’s previous releases, it hails a return to form for TVOTR. This also proved the case with the band’s performance last night at the Midland. The sense of immediacy, urgency and energy which has been the band’s hallmark was in full bloom. While the set proved to be somewhat short – around 70 minutes – the setlist was packed with some of the band’s best music. 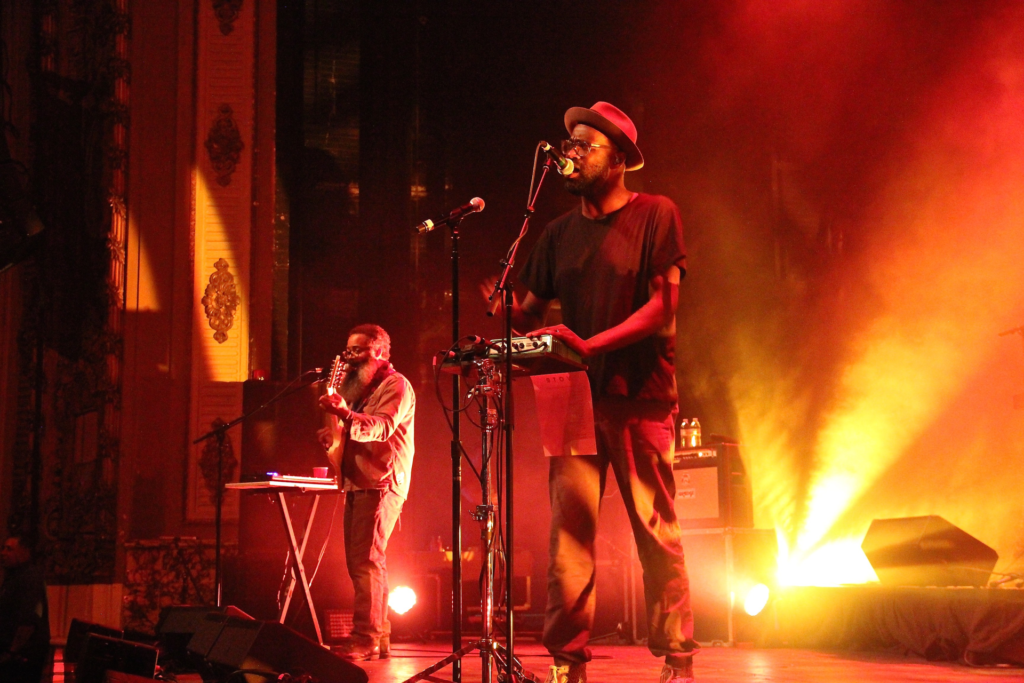 The band opened with “Lazzeray,” a blistering punk rock song that hearkens back to the band’s origins. Red and white lights backlit the band and frontman Tunde Adebimpe threw his body and arms all over the stage, very much alive as he belted, Seen the stars last night / We’re only vehicles for life / So should your mind begin to shine / Say ‘hey, alright!’, say “I got mine!”

The band followed that up with “Golden Age,” off of 2008’s Dear Science, a bouncy and expansive dance song that beckoned the crowd to clap along with Adebimpe and the beat. The mood inside of the Midland felt festive and warm, and the audience, numbering around 1,000, responded to the band as though it was a homecoming.

TVOTR is best and its interaction with the crowd most intense when it leans toward those driving, fast punk roots. When the audience recognized the opening chords to “Wolf Like Me,” it erupted, and jumping and dancing along with Adebimpe. The song, much more raw in this live version, flowed between its fast, urgent opening to a sludgy, horn-heavy breakdown flawlessly. It was, simply, exciting. 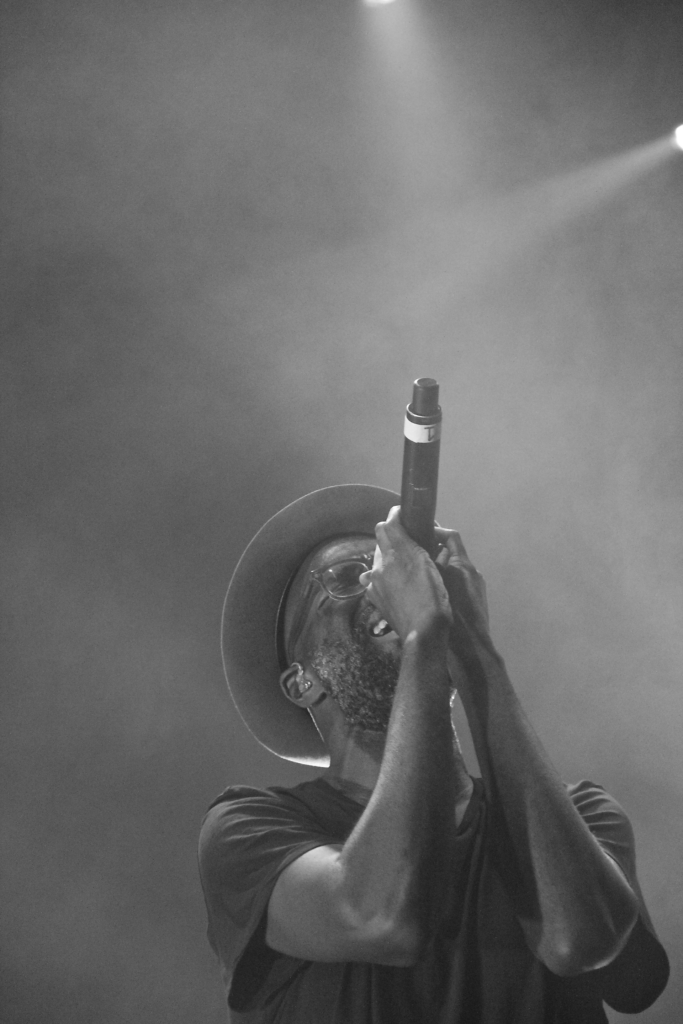 Neither Adebimpe or the magnificently bearded Kyp Malone talked much during the show, other than for Malone to humbly say, “Thank you guys. You have a delicious city.”

The band does permit you to read a little bit in between the lines, however. Seeds could not specifically be characterized as a record about loss and recovery, but those themes do make some appearances. During the performance of “Trouble,” as Adebimpe threw his head back and loosely echoed Bobby McFerrin’s mantra, Everything’s gonna be okay / oh, I keep telling myself / don’t worry be happy, it was hard not to hear it in light of all the band has lost.

The setlist drew principally from Seeds, Return to Cookie Mountain and Dear Science. A welcome addition was the performance of “DLZ” off of the latter. The song, which was featured prominently (and quite perfectly) on an episode of Breaking Bad, is about the spread of evil. Adebimpe’s cutting tone matched the precise percussion: this is beginning to feel / like it’s curling up slowly and finding a throat to choke. 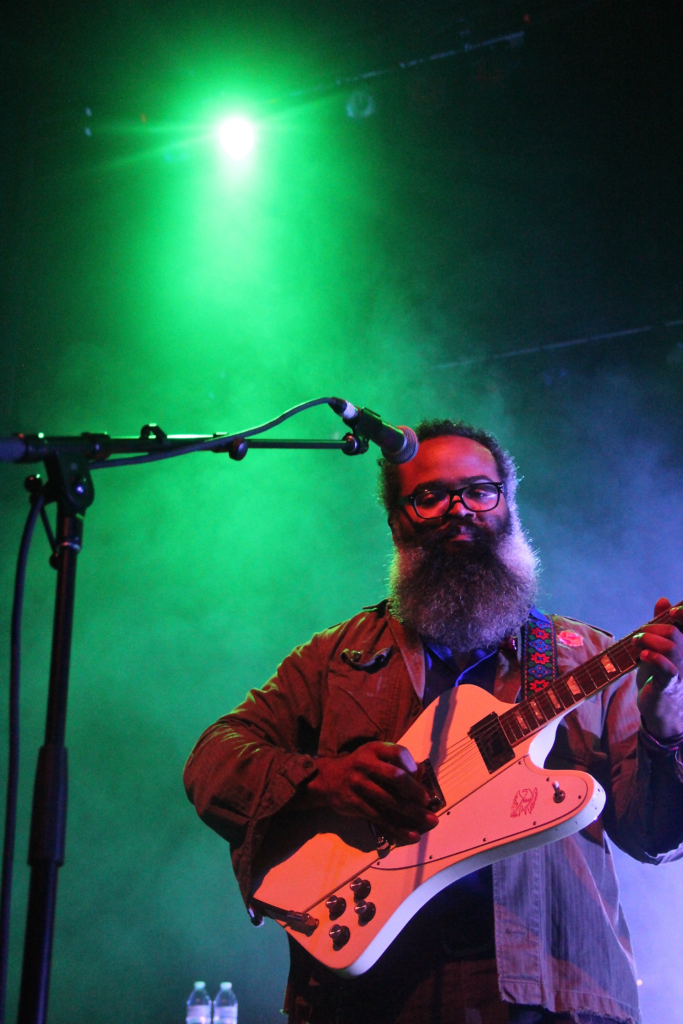 The band left the stage after about 55 minutes, which was somewhat puzzling for a band with such an extensive and high-quality catalog. But this has been common on this tour, as setlists from other cities have been a similar length.

For the brevity of the performance, however, the quality was very high, including the encore, which featured two of TV on the Radio’s finest songs. First came “Young Liars,” which featured an extended, hazy guitar intro. To the delight of the audience, the band closed with “Staring at the Sun,” with Adebimpe and Malone trading off their finest, loudest and most raw vocal performances of the night. Adebimpe extended his arms to the crowd, waving them in, and welcoming their energy. The band returned the favor. If only it could have been a little longer.