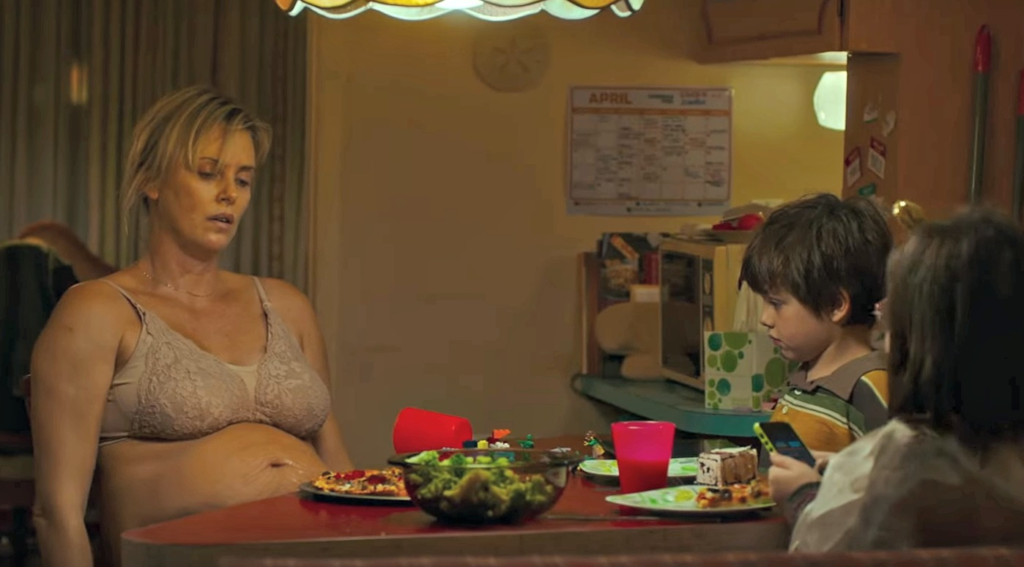 It’s easy to write off the idea of a “night nurse” as a millennial-age luxury for well-to-do parents who don’t want to spend the time it takes to properly raise a newborn child. But after seeing Tully, I have a newfound respect and empathy for any woman trying to navigate the screaming hellscape of motherhood while retaining her sanity. If someone else can give Mom some well-deserved shut-eye during those crucial a.m. hours, she’ll be more alert and present during her waking hours. Scratch that: she’ll be able to tell the difference between waking hours and sleeping hours.

And before anybody gets up in arms about me making a mass generalization that this role is only for Mom, I’m referring specifically to the movie Tully and the physiological imperatives that only mothers like Marlo (an exasperated Charlize Theron) can provide a newborn. Marlo suffered severe postpartum depression after her second son was born. Now she’s reflexively “happy” about having her third child, but the dread and panic behind her eyes is real.

In the latest collaboration between director Jason Reitman and screenwriter Diablo Cody — who previously teamed up for the overrated Juno and the underrated Young Adult — the night nurse is the title character, played by Mackenzie Davis. Tully is the manic pixie dream girl of overtaxed mothers. She only exists as far as Marlo needs her to exist (which is well beyond changing diapers and keeping the baby to a schedule), and Davis is perfect at realizing this mirage, peppered with all the wild-eyed enthusiasm that a young idealistic co-ed would have.

But Tully is missing the self-destructive streak. And her selfless generosity starts showing signs of going way too far, which is where the film’s tension develops. Have we become so cynical that we can’t believe that there’s any truly altruistic people left in the world? There are other hints that something’s amiss, but Marlo’s life with Tully in the picture is so much better off that we are willing to overlook those improprieties because we just want to see Marlo happy.

Cody’s script skillfully tweaks the stereotypes — like giving the “unsupportive” Dad (Ron Livingston) a believable set of well-meaning traits — while Reitman and his longtime cinematographer Eric Steelberg construct an aura of naturalism that’s just a step or two away from found-footage. Reitman’s use of jump-cut montages is especially effective because they not only deepen our empathy for Marlo and her state of mind, but they seem just “off” enough to cue us in that the best mother in the world might be constantly living on the edge of a nervous breakdown.

So, yeah: I’m not going to argue at all with the idea of hiring a night nurse. It’s a simplification of Tully’s themes to talk about the concept in this limited of a way, but in a sense, anything that alleviates stress for a mother is exactly the point of the film. In fact, Cody and Reitman spend so much of Tully embedding us in Marlo’s experience that anything outside her normalcy feels false. When a late-game development comes around, it feels like the movie has jumped the shark. But the feeling — like the rage a parent feels at their kids’ bratty behavior, or the frustration of another 3 a.m. feeding — is only temporary. Tully has enough lived-in performances and sure-footed observational truths to withstand the plot mechanics.