In response to Insurrection Day, Gov. Parson says Trump should “absolutely not” be blamed 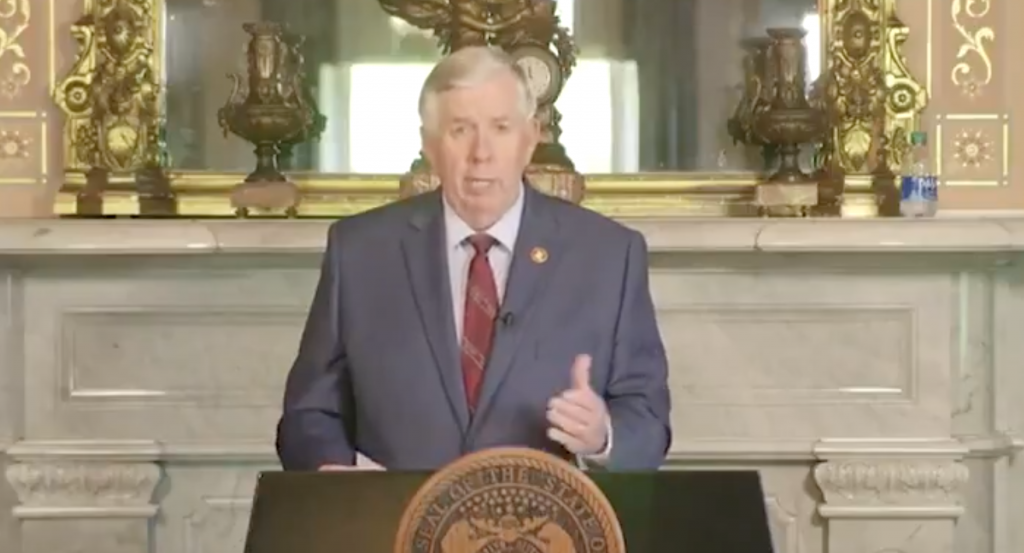 But he said people should “absolutely not” place the blame for the violence on President Donald Trump or the Republicans who were trying to block certification of the presidential election results.

“When you try to blame the president or blame somebody else, you know, my understanding is the president told them not to commit any crimes.” Parson said, later adding: “My point of it is that if they’re doing things that violate the law, don’t do it. Go back outside and protest.”

Dozens of Republican members of Congress, led by Missouri Sen. Josh Hawley, planned to object to certifying the presidential election results. But proceedings were suspended when extremists pushed past barricades and eventually on to the House and Senate floors, in a chaotic scene.

An armed standoff took place at the entrance to the House chamber, with Capitol Police officers aiming their weapons at rioters, who shattered glass panels on the door.

Trump at a rally had encouraged demonstrators to march on the Capitol. He promised to march with them, but instead returned to the White House.

Trump was silent as the mob sieged the Capitol, even as lawmakers from his own party urged him to tell his supporters to stand down. The president eventually released a video message telling people to “go home” but maintaining his unsubstantiated claim that the election was “fraudulent.”

Rep. Ann Wagner, R-Mo, said the blame for the violence rests with the president.

“The president needed to take decisive action, he needed to stop this immediately,” Wagner told St. Louis Public Radio. “He should never have incited this to begin with.”

Asked about the violence in Washington, D.C., at his weekly press conference, Parson said he had not been following the news closely. He equated what has happening in the nation’s capital to unrest over police conduct last summer and protests outside of Hawley’s Virginia residence over the weekend.

Local police in Virginia said the protests outside of the Hawley home were peaceful.

“Whether it was the middle of the summer in Missouri, whether it’s in Washington DC, or whether what you seen at Josh Hawley’s house with his wife, I’m a law and order guy,” he said. “I don’t care what you present to me or cause you’re under. You don’t violate the law. There’s rules and regulations, and you have to abide by them.”

The mob violence in Washington largely overshadowed the usual pomp and circumstance of the opening day of the Missouri General’s Assembly.

“I hope those folks get arrested,” Rowden said. “I hope they get thrown in prison and hopefully we can get back to some sense of normalcy.”

Asked if any of the blame should be laid at the feet of Hawley, who has become the public face of Congressional efforts to overturn the 2020 presidential election, Rowden said “I think at the end of the day, I think we’ve all messed this thing up.”

“I could stand here today and probably name 20 Democrats and 20 Republicans right off the top of my head who have done things that I don’t agree with and have done them for selfish and political motivations,” Rowden said.

At a press conference House Minority Leader Crystal Quade, D-Springfield, said that with many Republican lawmakers, including some of Missouri’s, “actively pushing the lie of a Trump victory over the past month, perhaps this was inevitable.”

“I’m confident these insurrections will fail but their actions will damage our democratic systems for years to come,” Quade said. “This is not acceptable and I hope every elected official Missouri will join us in denouncing this illegal act of sedition.”

“The violence and destruction that occurred today in our nation’s capital is unacceptable,” the statement read. “Peaceful protests are an important part of free speech, but violence can never be tolerated.”

The Independent’s Rudi Keller and Tessa Weinberg contributed to this story.

The piece is reprinted with permission via Missouri Independent, who focus on important Missouri political and policy work. They’re an excellent team of journalists and we’re always thrilled to be able to share their coverage with our audience. Support their work, if you can.