Opinion: On behalf of Missouri, Josh Hawley needs to go for his contribution to Insurrection Day 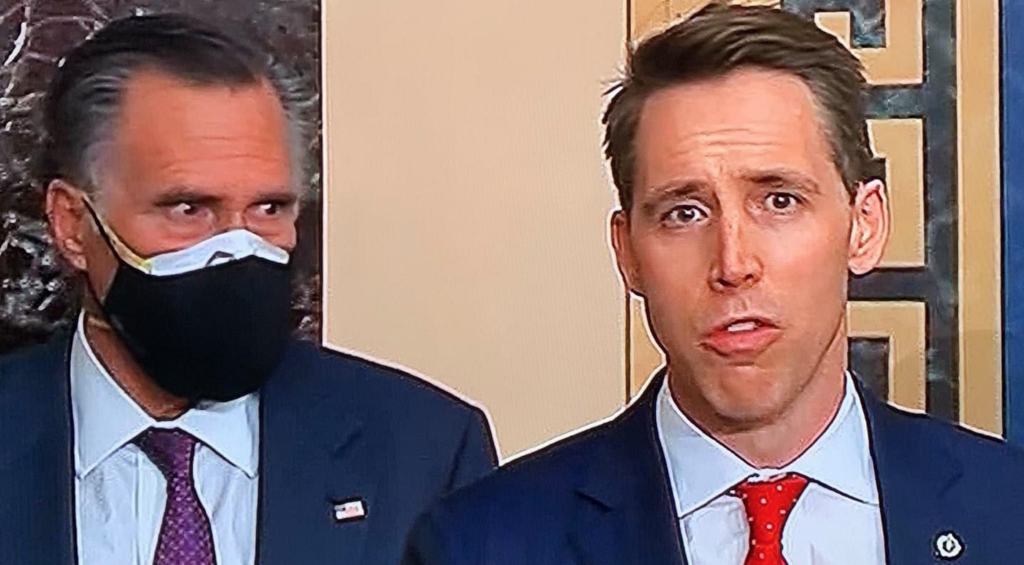 As Capitol rioters bashed windows and looted in glee, their neon phones raised like torches, our nation awoke for what seems the first time to our horrifying reality: Donald Trump is a mad king of the modern era. And just as any mad king requires a court of sycophants and liars, Trump needed fools like Josh Hawley.

Missouri Senator Josh Hawley’s self-serving record will be forever degraded by his extraordinary role in a bloody coup attempt that left at least four people dead and our nation’s historic, hallowed Capitol in tatters for the first time since the war of 1812.

That historic coup pales in comparison to the simpler duty we now face: Strip traitors of their power.

Every public servant in America, from president and senator to school board member, must swear a solemn oath to us. It reads in part, “I will bear true faith and allegiance to the Constitution.” Hawley’s faith has long evaporated. To denounce our Constitution’s free and fair elections—to repeatedly and falsely claim it “rigged,” as Trump and Hawley did, is to violate the spirit and word of that oath.

That oath is the bright line that protects the mechanisms of democracy. Once violated, there’s nothing to stop our leaders from using their vast powers to abuse us. What’s next? If Hawley doesn’t like taxes, he’ll tell us to stop paying for our libraries and parks? If Hawley doesn’t like our foreign policy relationship with Iran, he’ll privately arrange his own dealings? Without loyalty to our nation, what right does he have to claim to represent it at all?

In the hours during and after the Capitol’s riots, many leaders, including Hawley, condemned the violence. But to condemn the violence without the lies that fuel it is to knowingly, passively, allow the violence to continue. It is never enough to condemn a bloody coup attempt for its blood alone. We must remove the spirit of it—the lies—and Hawley won’t do that.

Hawley is Missouri’s problem, and we can’t look away. Our state’s highest leader is dangerously out of touch with reality, and it’s our own damn fault because we handed him the keys.

Calls for removal keep growing, both for Trump and for Hawley. Cabinet members are now weighing invoking the 25th Amendment. Facebook and Twitter, it seems, are belatedly coming to their senses to remove the mad king’s megaphone. And many more are calling for immediate impeachment.

Missouri residents are speaking up, both here and in Washington. Newly-elected Missouri Congresswoman Cori Bush is leading efforts to expel members of Congress who supported Trump’s treason, calling it a violation of their “sacred oath.”

If Congress fails to act on Hawley’s anti-American sedition, Missouri must expel him with our vote.

To win a statewide election, Kansas City must heed a lesson fresh from the 2020 election: too many of us don’t vote at all. KCMO is a sleeping giant. To save our democracy, we must first wake our neighbors.

Kansas City is a powerful base that can turn Missouri’s statewide elections, but a pitiful 60.53% of KCMO voters participated in our historic “once in a lifetime” election—a galling 20-point lag behind our metro’s sister counties. That’s on all of us to fix, and as Stacey Abrams showed us, we can do it. It doesn’t require fancy tech or big media spends. In fact, studies show that personal conversations have more impact on partisanship than the media. That can be done by each of us—by Kansas City’s moms, dads, college students, workers, renters, and teens.

To protect our democracy, Hawley’s traitorous ideology must be expelled. If Congress fails to act, it’s up to us.