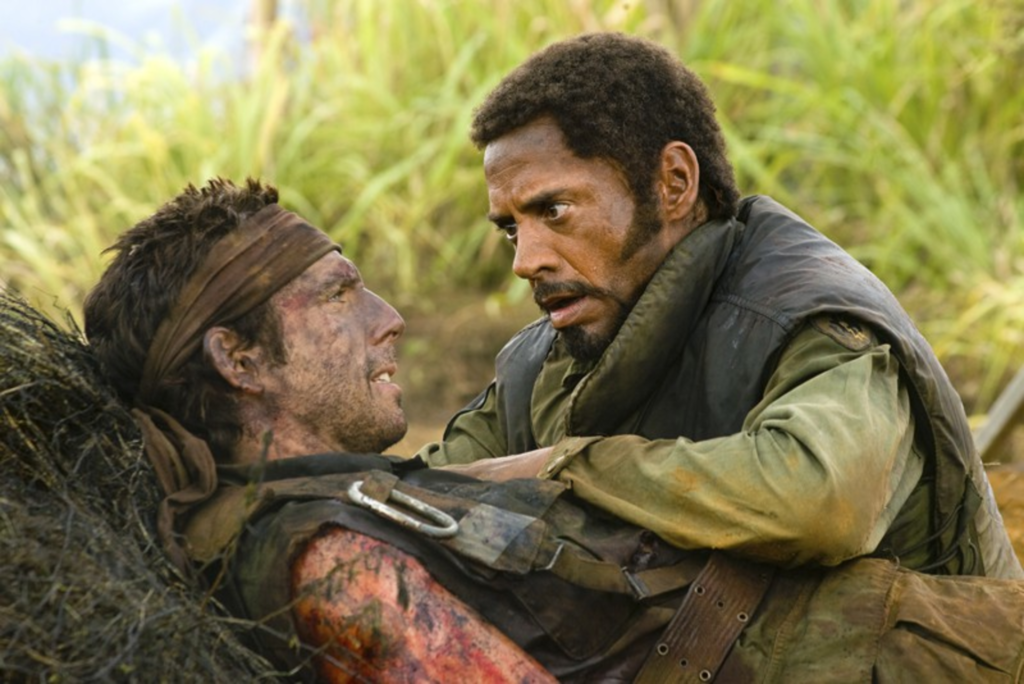 Early buzz out of Hollywood pegged Tropic Thunder, directed and co-written by star Ben Stiller, as the end-all and be-all of movie-biz parodies — a savage beast with a rough touch featuring Tom Cruise in a career-resurrecting role as bald-headed, big-gutted, foulmouthed studio boss Les Grossman, who does the fuck-you dance like nobody’s risky business. “Savvy” and “authentic” were but two of the kind words whispered by The Hollywood Reporter, to name one booster. Has no one ever seen an episode of Entourage?

Movies about movies date back to the birth of the movie business, and they’re all more or less the same: Actors are petulant, entitled, neurotic narcissists (unless they’re sweet, sincere, baby-faced newbies on their way to becoming petulant, entitled, neurotic narcissists); directors are easily corrupted visionaries or easily distracted imbeciles; and studio bosses are loutish buffoons. Hollywood is easy pickings, and making fun of it is what insiders do when they’ve emptied their arsenal. Tropic Thunder — which drops a bunch of actors into the wilds of Southeast Asia and shouts “Action!” — doesn’t stray far from convention, save for a little added gore, firepower and star power worthy of its nearly $100 million budget.

Stiller, who hasn’t directed a feature since striking a pose as Zoolander in 2001, is back in the sendup business, nibbling gently at the soft, manicured hands that feed him and co-stars Robert Downey Jr., Jack Black (wasted here), Matthew McConaughey (doing Matthew McConaughey) and Cruise. It even opens with some short-form satire in the guise of phony movie trailers for an action franchise’s latest installment (Scorcher VI: Global Meltdown, starring Stiller’s Tugg Speedman), a gross-out comedy (The Fatties: Fart 2, with Black’s Jeff Portnoy) and overwrought art-house erotica (Satan’s Alley, featuring Downey’s Kirk Lazarus and Tobey Maguire as himself). All of it resides in the land of the obvious, easy chuckle.

When it isn’t tossing softballs at the studios, Tropic Thunder is the very thing it parodies: a wall of noise engulfed in flame. The actors are supposed to be making a Vietnam War movie based on the memoirs of an aging hero (played by Nick Nolte, almost as grizzled as his infamous mug shot). It’s Apocalypse Now meets Platoon times The Dirty Dozen. But days into shooting, rookie director Damien Cockburn (Steve Coogan) is already weeks behind, so he drops his cast, which also includes Jay Baruchel as a can-do kid and Brandon T. Jackson as a pitchman for an energy drink called Booty Juice, into the jungle in order to achieve vérité. Things go awry when Tugg is taken prisoner by armed thugs and life suddenly imitates art, blah blah blah.

Stiller, having long moved on from sitcom social commentary (Reality Bites) and grim irritainment (The Cable Guy), is back doing the affable, well-heeled snark of his short-lived 1992 Fox sketch series and relying on the in-joke that’s been out in the open since Charlie Chaplin was making short films about movie sets in 1916. This year’s model, a little too eerily sculpted, is really just another action movie pretending it’s not just another action movie. Hence the “parody” angle, which more or less boils down to an agent (McConaughey) with a moral dilemma (a private plane or his client’s life?), Downey’s Kirk Lazarus exploring surgical-procedure blackface as the final frontier in method acting and the studio boss who pays surrogates to punch directors when he can’t actually be on set to lift his own meaty fists.

The film isn’t without its occasional pleasures, but they’re fleeting and forgettable, buried in debris and drowned out by the inevitable big bang. Kirk, who refuses to drop character till he does the DVD commentary, delivers a perfectly clever speech about how Tugg went “too retarded” in his sole stab at respectability, a movie in which he stammered through crooked buck teeth. “Everybody knows you never go full retard,” Kirk says, pointing to Rain Man and Forrest Gump as proof that you gotta rein it in. “Infantile, yes. Retarded, no.” But even that joke smells pretty musty.

That’s the thing about satire: It doesn’t play past its expiration date. And everything about Tropic Thunder already feels antiquated; I thought they stopped making movies like this around the time Arnold Schwarzenegger suited up as The Last Action Hero. The Player was meaner, Bowfinger was sweeter, and Day for Night and 8 1/2 and Singin’ in the Rain were simply better. Tropic Thunder is just another so-so Ben Stiller movie, this time with Robert Downey Jr. in blackface. You’d think that would be enough, but it’s not.