Tristen: “I’m on my own path of exploring the possibilities in music” 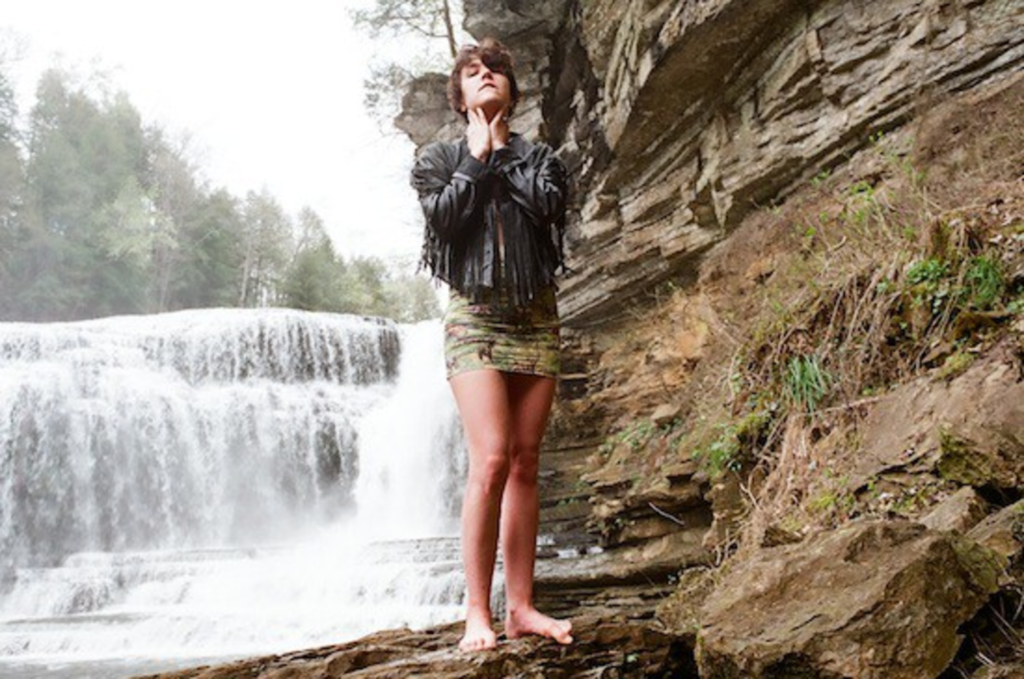 Just over a year ago, I saw Tristen open for one of my personal music heroes, Justin Townes Earle, at the Varsity Theater in Minneapolis. I remember this petite little thing with an adorable bobbed cut, wearing cowboy boots, daisy dukes, and a white-leather fringe jacket. She sang songs of her 2011 debut album Charlatans at the Garden Gate with a sweet lilt and twang, her dulcet voice betraying some highly accomplished songwriting.

Tristen’s second album, Caves, is quite a departure from the alt-country-pop act that gained her critical acclaim. The fringe and the cowboy boots have no place among the shimmering, futuristic synth-pop songs on Caves. It’s the last thing anyone could expect from an artist who was quickly starting to emblemize that “new Nashville” sound of gentle twang and deft hooks (a la Caitlin Rose), but perhaps that’s Tristen’s greatest move. After all, Caves sacrifices none of her songwriting talents or artistry – it just shows a different side.

So I’ve been interested in talking to Tristen for multiple reasons, and when I discovered she was coming to the Replay Lounge this Friday, I nabbed the opportunity. She’s quite the spitfire – after she answered my first question, the rest were all out the window.

The Pitch: Caves is quite a bit different from Charlatans at the Garden Gate. Like, it almost feels like two different artists. How did this album evolve?

Tristen: That’s the funny thing about doing albums… . We just wanted to have fun and do something musically that was fun for us on tour. We were using a drum machine on tour, and a lot of these songs [on Caves] came from that. So I was demoing this record with a drum machine, instead of going to a studio first to record and trying to communicate with the guys what I wanted in the studio and trying to get it right there. This record was written on keyboard, and the last record was on guitar. But a lot of things are the same…

There were a lot of organs on Charlatans. My last band is the same lineup for this album, which is funny. The lead guitarist is the same, so in some ways, if you separate all the music, the parts are actually the same. It’s just that it’s been sort of an electronic element, and then the natural element is kind of mixed together on the record. I mixed my live harmonies with the synthesizer.

The thing that I think is important, is that really, for me, the only motivation in making a record is having an overarching theme as to how I’m going to make it. So if the song is a mannequin, you need to make sure that it’s well-constructed and in good form, and whatever clothes you put on it will look good. I kind of feel like Charlatans was my “Sixties girl-group rock-and-roll homage,” and Caves is my “dance-pop homage.”

That’s quite an answer. You weren’t concerned that people would get confused by the change in style over your albums?

I listen to a lot of different kinds of music and genres. I feel free from that idea that I have to adhere to one genre. For me, just starting out, I don’t feel completely content just cranking out country songs. I’m on my own path of exploring the possibilities in music, and with computers and recording, it seems silly not to explore that in 2013. It would seem silly just to be stuck in tradition. I’m just kind of doing my own thing, and I think the record format is a great way to pick out a collection of your songs and fit them in a way that makes sense.

I have a very open mind about what I like, and I like everything – I don’t understand people who are like, “Oh, I like everything except modern country and rap” or whatever. I feel like having the Internet at your fingertips – it opens up your ability to have exposure to every genre.

The way you’re talking about this really makes me think of – and I hate to say it, really, but – well, Miley Cyrus. I mean, she just had her new album come out, and it’s completely different from what she’s done before.

It’s really funny, because no matter who you are and where you are and what your opinion is, it’s [Miley Cyrus’ music] so pervasive, because of the giant advertising campaign.

[page]I hate to use her an as example because there are a lot of other variables, but I do feel sometimes like she represents the sort of generational disregard for genre adherence.

You have to think about it and jump back – a hundred years ago, there were no records, and there was no ability to record music and there was no commodity. They were making music in clubs, and they were working-class, and then the record companies came out and created genres to brand music for people to sell it. So from an artist’s perspective, we’re not thinking about, “Gee, how am I gonna brand myself.” I mean, some artists do, but I feel like as an artist, my main concern is to be fresh and new. I don’t want to do what everyone else has done.

So for Miley, she’s probably trying to discover who she is and do something different, and when you do that in something, immediately you’re going to get people who are not into it. But if you are known over time as the kind of person who can change, and especially if you’re a songwriter… . We all listen to different genres, we get music for free and we have constant access. We’re no longer going to the record store and listening to MTV for the videos. There’s no longer one way to discover music. We can discover it however we want, for free. So I think it’s definitely affecting people’s palates and exposure, to be able to look up whatever.

Wow. OK. New topic. Tell me about songwriting for you. I love your lyrics. Especially the song “Winter’s Night.” It’s so haunting and tragic. Where did that come from?

Well, that’s actually the only song on the album where I didn’t write the lyrics, but –

[Laughs.] No, it’s OK. So, those are the only lyrics that I didn’t write. I was reading this book of poetry – so, Boris Pasternak wrote Dr. Zhivago. He’s a Russian poet. The book of poetry that I was reading, it’s Boris writing poetry as the main character of Dr. Zhivago, who is a poet and a doctor during the Bolshevik Revolution, which is crazy. It’s really cool for me. It feels very in the moment.

OK, well, as a backup, can I say that I also really like “Forgiveness”? You sound very angry, and that’s kind of awesome to hear.

Oh, good! I get embarrassed about songs that I like that are really mean and angry, but I think people can really relate to that. Like, saying that my forgiveness is not tackling you and beating you up. Like, I’ll forgive you in the very worst situation if I have to. It was written from a moment of anger.

Was it written about anyone in particular?

No… . All of the songs are composites. I like songs that I can relate to, that aren’t specific, that are general enough so that people can apply a lot of different things for that situation. You just want to find that thing that defines those examples that you have in your head.