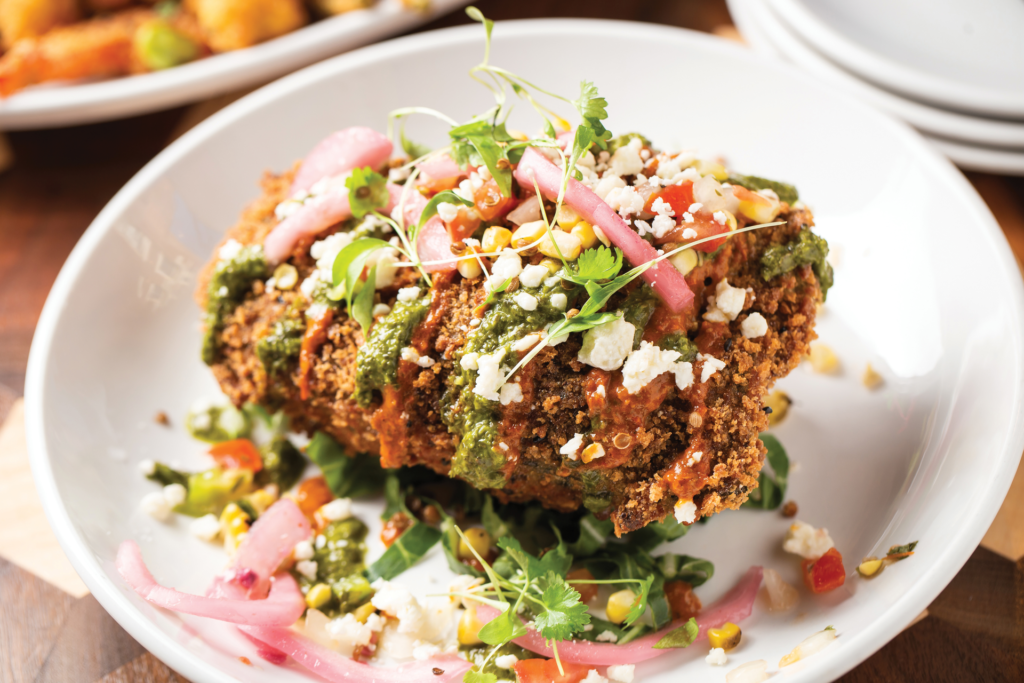 Chain restaurants with sprawling menus and microwave-centric kitchens are a bit of a collective joke these days. Applebee’s, like Nickleback or jorts, has become lazy shorthand for anyone taking a swing at mass-market mediocrity.

But I’ve always been fascinated by the melting-pot mashups those restaurants and their novel-length menus inspire. I recall more than one youthful Applebeevening bouncing from “Asian-glazed riblets” to something called a “quesadilla burger” (This land of plenty! This cornucopia of colonized chow!)

It was only a matter of time before some millennials came along and, having already crucified casual dining, resurrected its best features beneath some Edison bulbs.

Tribe Street Kitchen has little in common with the Riblets of Yore. But it is a holy land for anyone who has ever been asked “Do you want Indian, Mexican or Thai?” and answered “Yes.”

Tribe opened in March on a piece of prime real estate on the River Market streetcar line. Since then, it’s earned sentiments as varied as its internationally inspired menu. I want to love this place. I often do. The beers are giant! The prices are reasonable! But the food and service are — forgive me — all over the map. 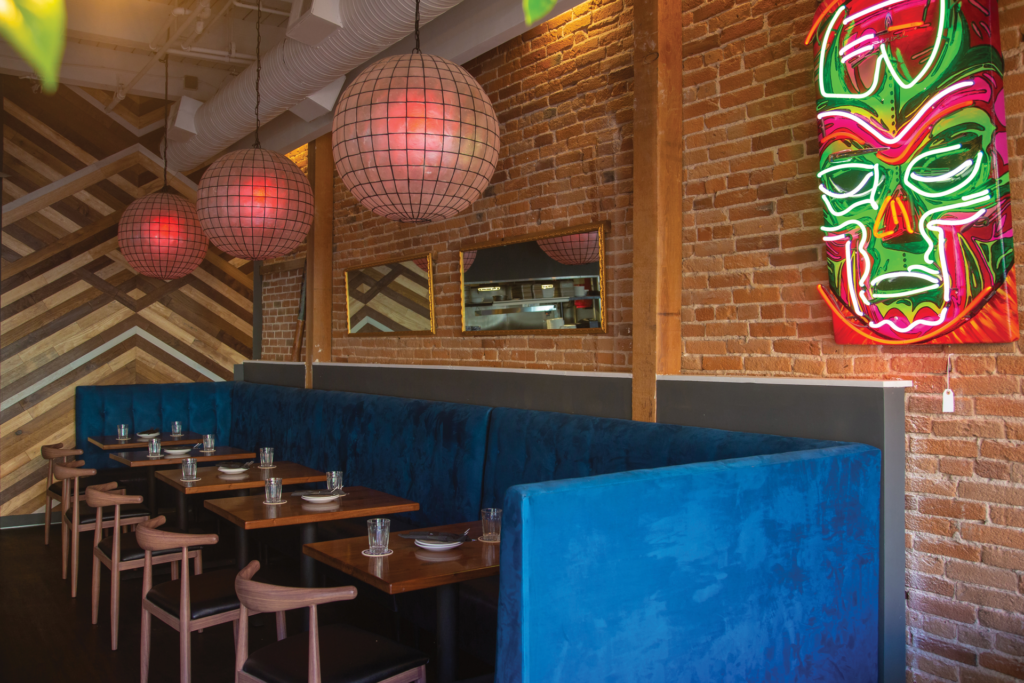 Co-owners Ben VinZant, Sam Hagan, and Jordan Mathes have, if nothing else, created a supremely pleasant spot for happy hour. The warm bar lighting does a lot of heavy lifting: if you ignore the chevron-patterned shiplap, you can imagine yourself in a bustling night market where neon signs scream, sodium street lamps sputter, and stark interior fluorescents spill out onto the crowded street like an accusation.

Even on slow nights, the vibe is buzzy and sociable. Cocktails arrive by the pitcher; bar bites are novel and portioned for sharing. There’s a wine list, but it isn’t the focus. Executive chef Lance Gipson’s dishes are boldly spiced (and sometimes baldly spicy); you’re going to want a beer.

For all Tribe’s international ambitions, the taplist is decidedly local, with selections from Stockyards, Martin City, Brewery Emperial, and…Hamm’s (I can’t think of a better macro for which to break ranks). Drafts are reasonably priced to start, which may explain why the happy hour pours are bigger rather than cheaper. Order a beer between 2 and 6, and it’ll arrive in a chunky stein the circumference of a salad plate.

Possibly owing to the size of said stein, I puzzled over the happy hour menu for far longer than seemed ideal. That menu lists a few drink specials as well as a selection of dishes from the dinner menu. But you can also order off the full dinner menu during happy hour. No matter which menu you order from, the food is the same price. Confused? Me too. My server offered zero guidance.

Still, navigating those menus reaps rewards. The chile relleno (pictured above), which is only available during happy hour, was a delicious showpiece. It was unlike any chile relleno I’d tried: crisp and dry, with a glut of gooey chihuahua cheese, a smoky salsa roja and a coarse, decidedly un-eggy breading. It was also roughly the size of a bicycle tire.

The three happy hour cocktails are worth ordering, too. The Mamalona margarita was smooth and sunny, perfectly pinned between sweet and sour (and served in an elfin glass boot). The white and red house sangrias were subtly flavored without skewing too sweet. And the La Rambla cocktail was cracklingly dry, heightening the flavors of sparkling rosé, strawberry, and elderflower.

Another happy-hour-only steal: the nachos. Nachos are a dicey pick on most bar menus. Too often, they’re forgettable, soggy mounds of bagged chips and reconstituted cheese. Tribe’s nachos were thick, salted totopos that stayed crisp despite a heavy load of melty Chihuahua cheese, thin-sliced serranos, and fire-roasted corn. The whole affair was trimmed divorciados-style with dueling red and green salsas. For a modest upcharge, you can add a protein. My table ordered the chicken mole. We were served carnitas.

I played dumb when they arrived, trying to be polite. “Oh!” I prompted our server. “Is this the chicken mole?”

She squinted down at a plate of what was unmistakably pork. “I’m not sure,” she said. “I can ask the kitchen?” She hesitated. We kept the nachos (and, like good Midwesterners, silently paid the upcharge for the mole we hadn’t been served).

Tribe’s front of house is largely composed of attractive, clean-cut young people who look as though they recently returned from a mission trip building CrossFit gyms in Kenya. Service on all three visits was friendly but shaky. I wasn’t offered a bar menu until my third visit and was surprised to discover a full list of creative, globetrotting cocktails. (I liked the Tuk Tuk’n Around, an opaque, seafoam-green brew of white rum, cucumber and lime that had a silky mouthfeel thanks to taro root.)

Timing was an issue, too. On one visit, I was careful to order the Korean beef short ribs as a starter. But those ribs hit the table exactly one minute before the entrees, making an otherwise laidback meal feel rushed. The ribs were also lukewarm, though the flavors of soy sauce, brown sugar, and gochujang sang through.

To be fair, Tribe isn’t necessarily built for structured courses. The menu seems geared toward communal dining, and the trendy-casual ambience absolves any guilt you might feel about pilfering your tablemates’ fries (and they’re very good fries). Sure, there are a few industrial-rustic design tropes — lots of exposed brick, enough devil’s ivy to choke a housecat. But the artwork is bolder (from sugar skulls to a neon Lucha Libre mask), the colors are brighter (hello, lapis-hued velvet booths) and the bar is plated in cool hexagonal tiles made locally by R24 Studios’ Cody Brown.

Another hip addition: a wood-fired grill used to alternately brilliant and baffling effect. The grill was ideal for the nopales street tacos, lending an earthy char to the tender and tangy cactus pads. But it was less ideal for Tribe’s chicken korma. Gipson’s gravy was creamy and faithfully spiced, ladled around an herbal mound of cardamom rice. But browning the chicken thigh pieces on the grill (rather than braising them in the sauce) buried the curry’s subtler flavors in muddy char. 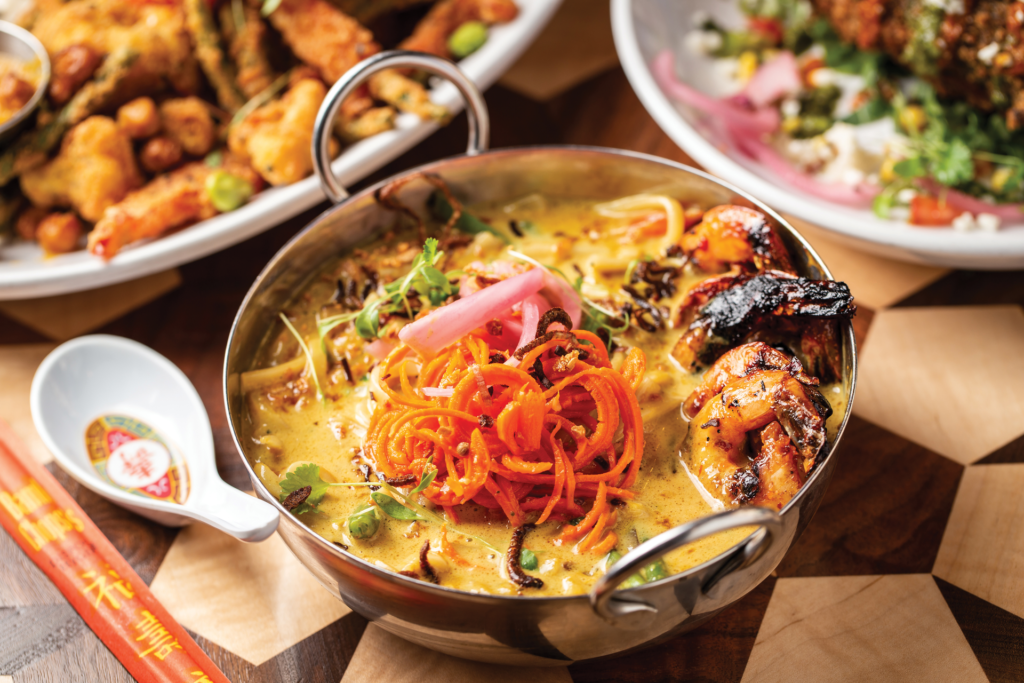 The khao soi noodles (above) were another nearly perfect dish. The rich coconut broth was well-spiced and fragrant with fish sauce, though it lacked the floral notes I associate with the dish (makrut lime leaves often fill that role). The thick, angular egg noodles were comforting, and a cap of lightly pickled spiralized carrot added textural variety and a spark of acid. But as in the korma, the shrimp were grilled, adding a discordant brown note to the dish.

Eating around the world at Tribe is an exercise in almosts and buts. The bar burger was perfectly engineered but undersalted. The beans in the feijoada, a Brazilian stew stippled with cotija cheese, were plump and flavorful — but the chorizo was dry and chalky, and the dish needed a hit of acid to gussy up the flavors. And the po’ boy had an addictively spicy remoulade, but the beer-battered shrimp turned gummy inside the overlarge roll.

When the dishes are good, though, they justify any amount of frustration. A cold harissa chickpea salad was exceptional, with tender chickpeas, brightly acidic vegetables, and a full blush of hazy heat. The textures and flavors were as varied (and harmonious) as the restaurant’s vision. 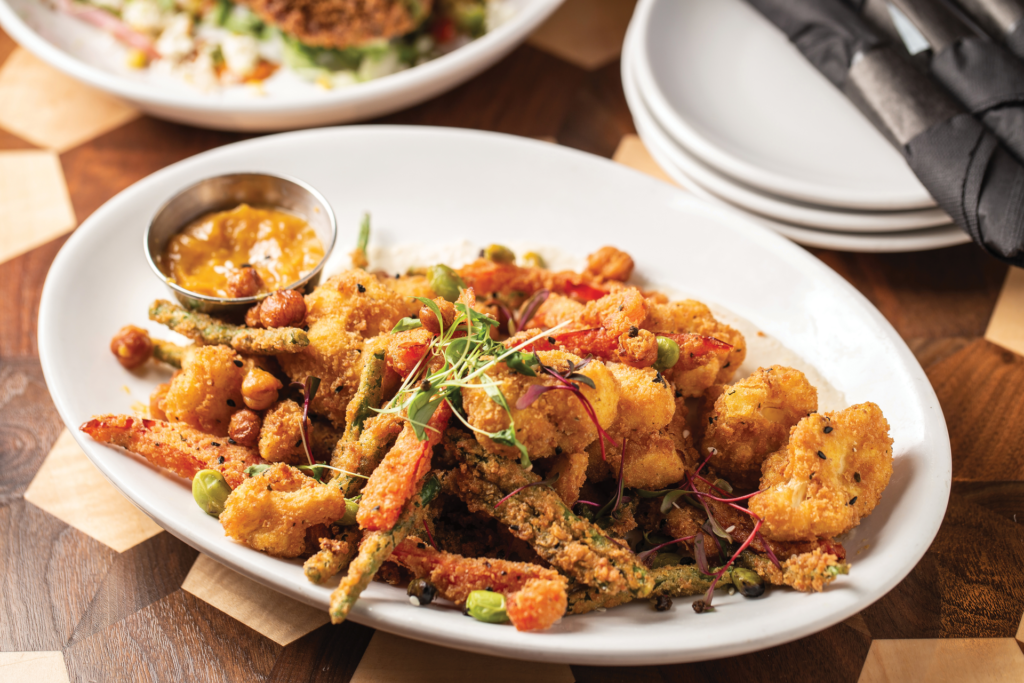 I was similarly fond of a shareable platter of crispy curried cauliflower (above) dotted with green beans and pepper strips. The vegetables were decorously battered and fried to a light and airy crunch. I had a hard time forgoing the accompanying charred leek yogurt sauce (smoky, savory, seductive), but the dish comes with a solid mango chutney as well.

Tribe has all the ingredients for a hit: a stylish space, bold flavors, and party-sized drinks. The flaky service and uneven menu may improve with time. For now, it’s one of the more appealing spots for a downtown happy hour — as long as you can navigate the menu.

Slurp a La Rambla at happy hour and make a meal of small plates: the chile relleno, the crispy curried cauliflower, and the harissa chickpea salad.