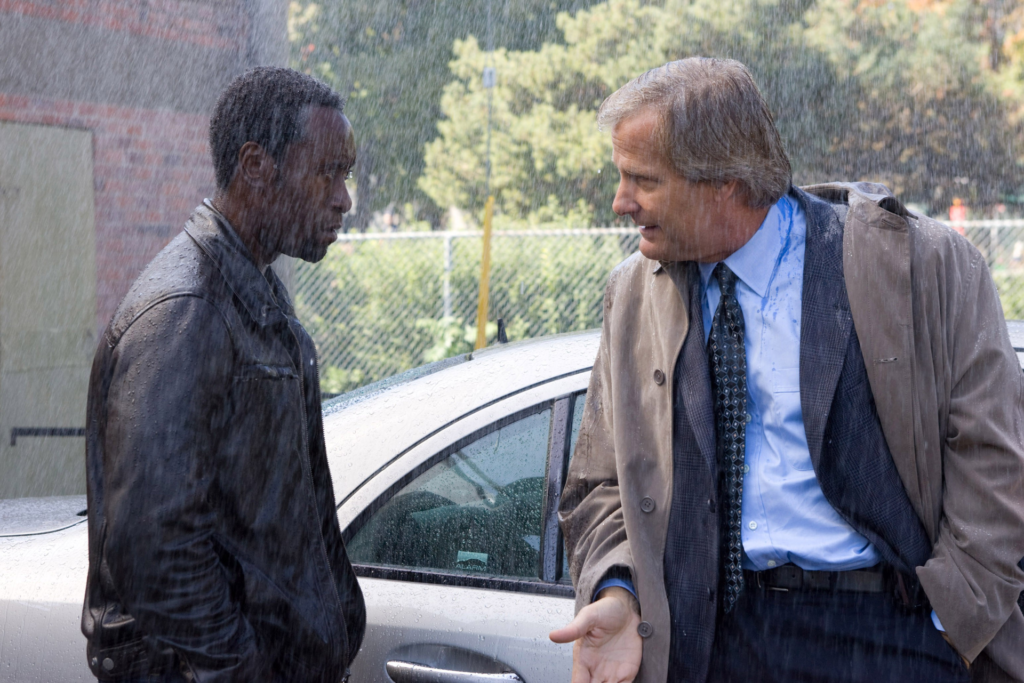 Despite his reputation as that rarest of creatures, the Hollywood intellectual, new evidence suggests that Steve Martin reads — prepare yourself — thrillers and spy novels. That’s the only conclusion one can draw from the story credit the comic actor receives on Traitor, an uneven but engrossing terrorist thriller that’s one part Syriana and many parts John le Carré and Frederick Forsyth, two masters of the double-agent, hunted-man novel. Martin shares his story credit with screenwriter and director Jeffrey Nachmanoff, whose work here is strong enough that he may finally shake off the taint of having written The Day After Tomorrow. Imagine his relief.

Traitor‘s man on the run is Samir Horn (Don Cheadle), an American-born mercenary who at age 9 witnessed his Sudanese Muslim father being blown to bits by a Middle Eastern car bomb. The culprits are unknown, but years later, Samir is in Yemen, selling Semtex explosives to jihadists and, as a bonus, providing lessons on how to handle a detonator. “I’m going to teach you how to use them,” he says, “without blowing yourself up — unintentionally, that is.” It’s a rare joke for the heavy-hearted Samir, who has a tendency to stare off into the distance — a Cheadle specialty. He’s mulling over, perhaps, his time as a soldier in the U.S. Special Forces, a job (and a country) that he turned his back on after a tour of duty in Afghanistan led him to become an Islamic fundamentalist.

“Is he a devout Muslim?” FBI agent Roy Clayton (Guy Pearce) asks Samir’s girlfriend (Archie Panjabi). “He’s a Muslim,” she replies. “I don’t think there’s a sliding scale.” Clayton can’t quite wrap his mind around a special-ops soldier turning terrorist, even as evidence pours in that Samir is behind a series of European bombings, including a deadly attack on a U.S. embassy.

In its well-written first hour, Traitor hops from continent to continent with Nachmanoff, in his directorial debut, nimbly juxtaposing terror-cell intrigue with moments of self-reflection from FBI men and bad guys alike. The screenwriter gives the best lines to the bad guys, including a cell leader (Raad Rawi) who sips expensive wine in French cafés and shakes his head at these foolish Americans. “Once upon a time, it was the Americans who were terrorists against the British,” he says. “They’ve forgotten their history.” Beyond such talk, the filmmaker steers clear of present-day politics, never mentioning Bush or Iraq or even the CIA. Instead he focuses on the unruffled procedural professionalism of the FBI agents pursing Samir.

In Europe, those FBI guys (including Neal McDonough as Clayton’s partner) are on their game, but they seem to get dumber once they return to America. Realism and insight go out the window as soon as Samir crosses the U.S. border to set in motion one last plot.

Cheadle, who has a gift for playing outsized personalities — such as DJ Petey Greene from last year’s Talk to Me, or the hyperactive killer in 1995’s great Devil in a Blue Dress — is stiff and self-conscious here, as if it’s taking all his concentration to keep Samir’s convoluted backstory straight in his head. He isn’t helped by the spy-novel goofiness of the terrorist’s final plan, which calls to mind a similar scheme propelling Don Siegel’s far superior 1977 thriller Telefon, in which a rogue KGB agent travels across America activating deep-cover Soviet operatives. Nachmanoff (and Martin?) has devised a nifty last-minute twist, but he appears to take little pleasure in the telling — almost as if he’s embarrassed to be having fun with a subject as serious as terror. Creating an ingenious mad bomber isn’t quite the thrill it used to be.