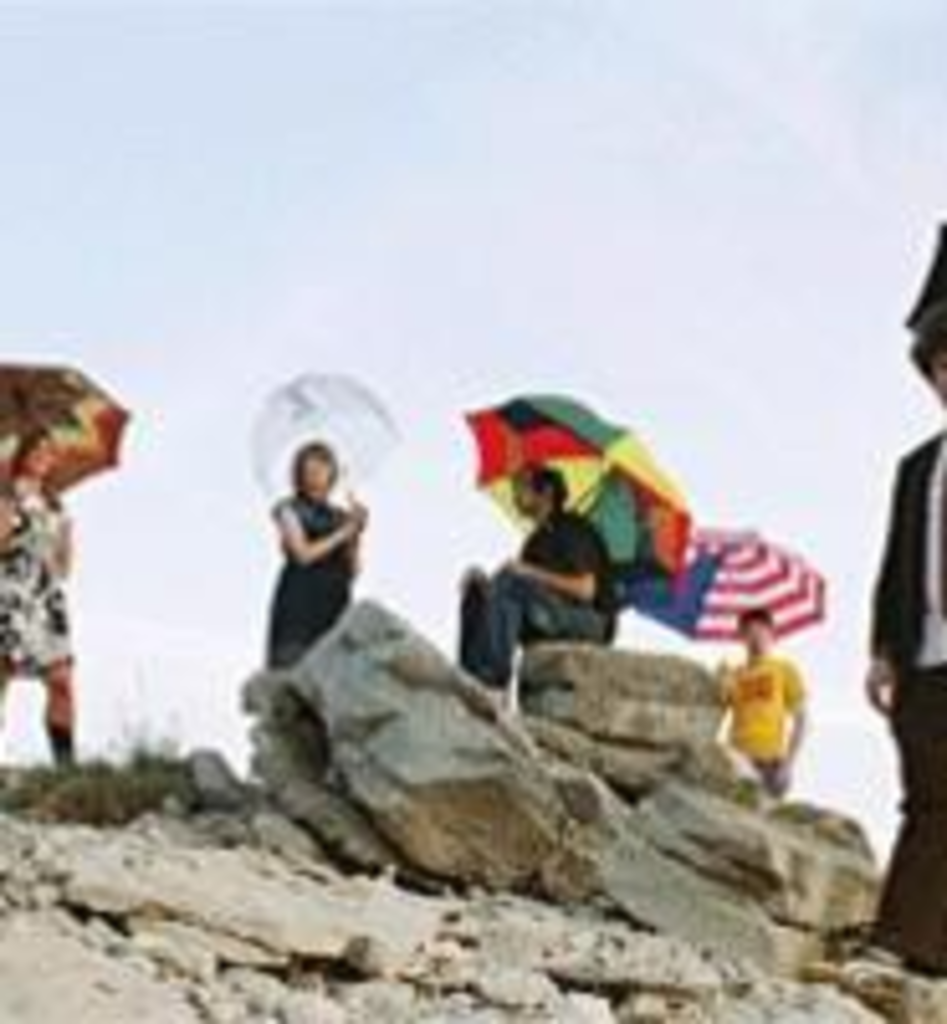 Mike Tuley sports an Errol Flynn mustache and a curly shock of auburn hair. The suave new facial hair can’t disguise the bandleader’s nervous energy, though. He spills Scott Edwards’ beer trying to pull a napkin from beneath it in an attempt at prestidigitation. Ad Astra Per Aspera is like that. It surprises you.

The longtime Lawrence group’s dynamic glows with the familiarity of family, in music and conversation alike, which is not surprising considering that of its five members, four are coupled. Drummer Kurt Lane and keyboardist Julie Lane have been married since May (he proposed to her in Central Park), and Tuley and second guitarist Brooke Hunt have been involved for about four years.

“Scott [Edwards, bassist] also has a long-term girlfriend, but she isn’t in the band yet,” Tuley jokes. “Thus far, having two couples in the band hasn’t proved difficult,” he continues. “There isn’t much cutesy bullshit when we’re together making music. We focus as a group.”

Ad Astra shows its focus onstage and on record, navigating diverse feelings and sounds, treading the lines between melody and noise with a ferocity that recalls Surfer Rosa-era Pixies.

In a way, the band’s music, which reaches a new plateau with the first full-length Ad Astra album, Catapult Calypso, is like a successful relationship. Every screaming outburst is tempered with a wriggly make-up-sex groove.

Tuley, Hunt and the Lanes use their voices as diversely as their instruments. They burst into cheerleader chants, then, between passages of peaceful crooning, Tuley explodes like an enraged third-grader shrieking at the bullies who have pushed him too far. Through it all, the music remains upbeat, stubbornly catchy and danceable. Hunt’s guitar and Julie Lane’s keyboards add atmosphere and complexity, and Edwards, who has adopted the persona of the band’s brooding mystery man, keeps pace with Kurt Lane’s complex beats.

Tuley himself, who not only writes the songs but also taught both Hunt and Edwards to play, is the guy in the creative-force driver’s seat. His artistry struts through Calypso. The postpunk intensity of “Voodoo Economics” and “Scatter Baby Spiders” contrasts with the poppy aesthetic of “Post-Scarcity Sing-Along” and “Unnamed Acoustic Songs” and with the epic architecture of “Nothing Else Is the Real Thing,” “Glosbos Illuminados” and “A Fish Would Much Rather Swim.” The album’s closer, “Flannery’s Coming Home,” captures the haunted, streetwise allure of Sonic Youth’s “Dirty Boots” on the way to a soaring resolution.

Tuley says he and his bandmates still haven’t settled on a single approach to their music. But despite its schizophrenia, Catapult Calypso has a solid identity.

The reasons that this group has been able to fashion something as solid as Catapult Calypso become apparent when you talk to its members. They relate to one another like a group of friends who have been through a lot together and have developed the humor and humility to deal with it. When asked about his musical influences, Edwards replies that he is “heavily influenced by the people in my band.”

It makes the name, which is the Kansas state motto, all the more appropriate: To the stars through hardship.

As 2005 began, Ad Astra had two fine EPs (2003’s An Introduction To… and 2004’s Cubic Zirconia) to draw from and had played all over the Midwest. The group commanded a loyal following but was frustrated by its lack of distribution and opportunities for wider exposure. After recording a demo with local producer Chris Cosgrove, the band members decided that if things didn’t pick up, they’d have to break up.

Then their luck changed.

Canadian indie Sonic Unyon showed interest in the demo, and around the same time, the band booked dates at South By Southwest in Austin, Texas. By August, the album was finished, the contract with Sonic Unyon signed, the trip to Austin had become the subject of a two-part documentary for Lawrence’s Channel 6 show The Turnpike, and Kurt and Julie were married.

As for their musical progression, everyone in the band agrees that their work on Catapult Calypso is a career best — dirtier and more lively, they say — and they share genuine pride in the new songs. In a poignant moment in the Turnpike documentary, a quietly frustrated Hunt comments on the small crowd at a cramped bookstore gig: “You make something wonderful, and you want to share it with people.”

Based on the buzz the new material has created, it would seem that Ad Astra Per Aspera will finally get to share its music with a lot of people. The band’s innovative sound, intense shows and unique aesthetic — the fake palm trees often adorn the stage, Tuley’s favorite color being “tropical” — give Ad Astra a legitimate claim to being among the area’s best outfits.

Commercial success is a long shot, and the band members haven’t quit their day jobs, but as Julie Lane points out in the documentary, “At least we don’t know together, I guess.”