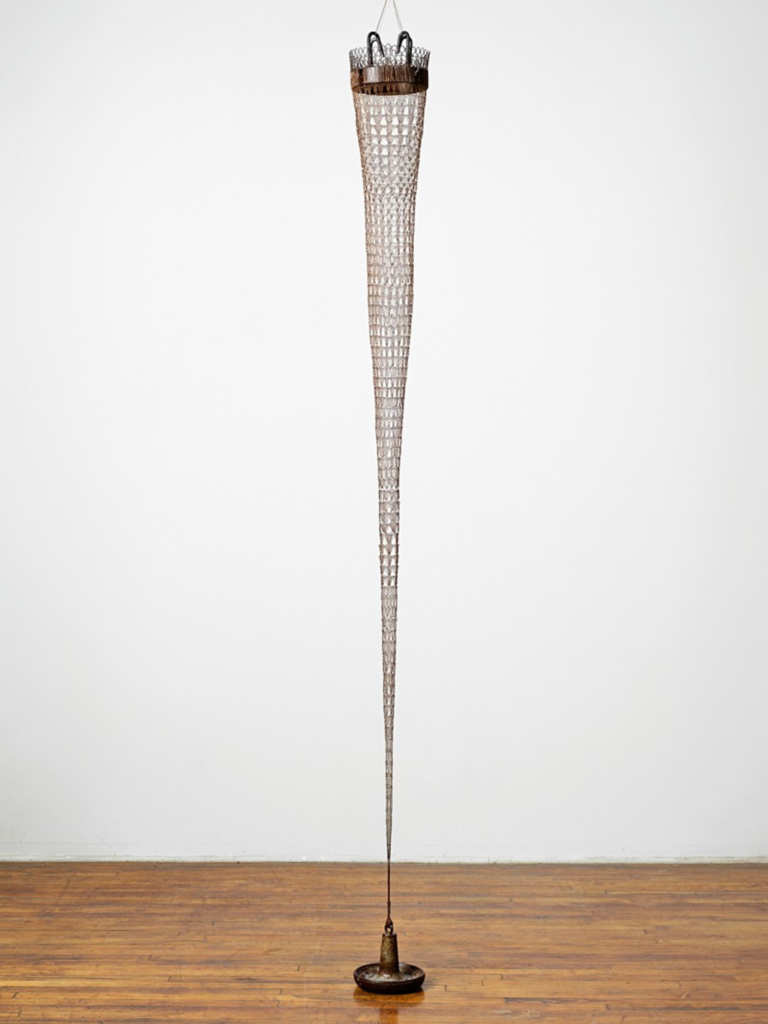 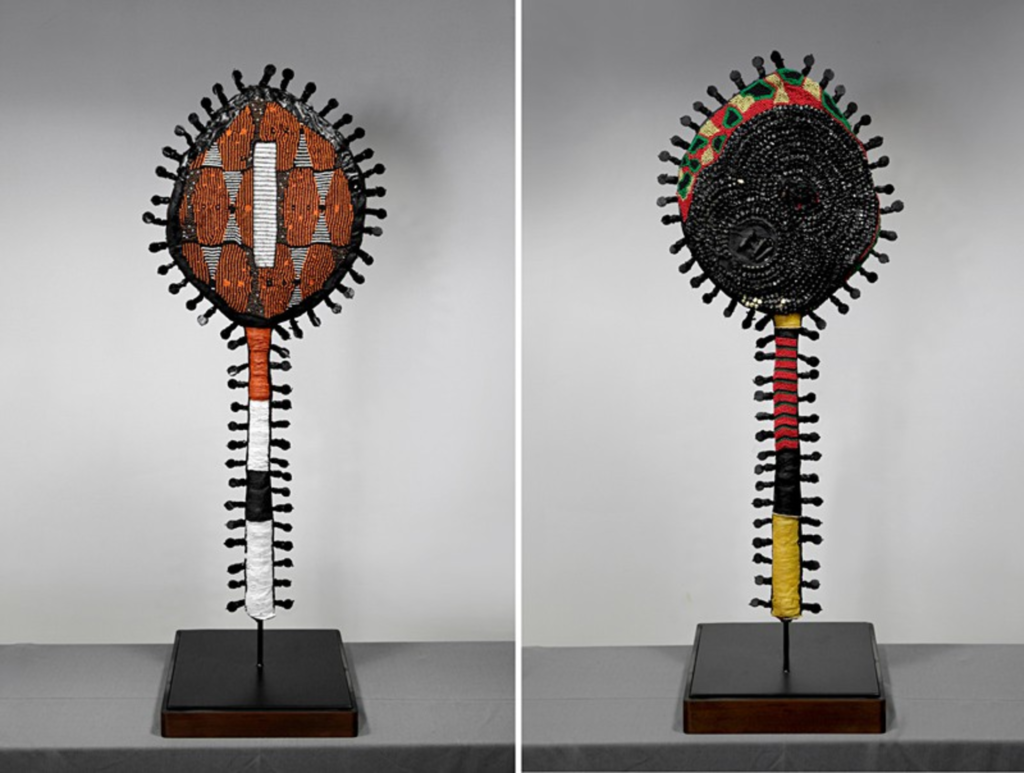 The value of an artwork can’t be measured by how long it took to conceive and make. But how long it holds your attention is another thing. The dual exhibitions at Sherry Leedy Contemporary Art — Tracy Krumm’s In the Making and Tanya Hartman’s We Write Ourselves Anew — cast lines of thought at each other across the rooms, and if you allow yourself to be caught up by them, intriguing connections emerge. The art within required patience to create. And it demands — fairly — the viewer’s.

Both of these accomplished artists (their résumés take pages) are rather obsessive. Krumm herself uses that word in a statement, and her webby hangings, made of meticulously crocheted metal wire anchored to rusty found objects and hand-forged hardware, take ages to construct. Jennifer Bowerman, the gallery’s assistant director, says the double-layered “Wall Curtain (Saw Blade)” took the artist about two years.

Hartman’s work here also spans time. “What Was Beautiful,” a variation on the idea of a gratitude journal, begins in 1999. Reminiscent of William Carlos Williams’ observational poetry, it offers accessible meditations on daily life and — along with her prayer paddles and three larger sculptures — consists of assiduously layered materials.

From a distance, the eight panels of “What Was Beautiful,” each holding 48 tablets, look like carefully laid rows of iced rectangular cookies. Up close, each “page” is a cloth-covered or painted board stitched with horizontal lines, suggesting notebook-paper rules. Between these multicolored spacers is the text. Each tiny, typed word and punctuation mark has been individually cut out and pasted into place. Visual variety comes from differences in the length and arrangement of text.

Hartman has placed some narratives chronologically (Nos. 167 and 168, for example, both speak of a 40th birthday), but a closer reading indicates a muting of seasons and a telescoping of time (in No. 87, she is 37 years old). And she has painted over some phrases while leaving text visible underneath.

We note among the words multiple locations: Kansas City, New York, Mexico. There are intimate interactions with a spouse, a parent, a child. There is the decline and death of the writer’s father. In No. 323, she hears that an old friend has died, someone who had cut her out of her life, unexplained, for years. “She was so wonderful, complex, flawed and striving, and now she is gone and we shall speak no more.”

As installed, the panels are challenging to read without crouching or craning. Fortunately, two Mac terminals allow gallery visitors to click on any day’s expression and see it up close, isolated on the screen. Hartman also provides narration if you press Play — though, if you’re like me, you prefer your own head’s voice to the poetry-reading formality that comes through the headphones. (As for the blank, unnumbered panels, it seems unfair to give anything away here.)

The framed texts-as-composition reveal, at a glance, the sheer endeavor of living through — much less documenting — each and every day. It’s impressive, this memoir, and it would make a good hand-held book, to be absorbed as slowly as its components were composed. Interacting with the eight wall panels, though, is valuable in its own right, in part as a kind of memory game. The human habit seeks to “match” motifs, learn who “characters” are, determine a chronology even as the lines jump around as much as our own memories.

Hartman is, in fact, working on a book about a Sudanese refugee whose story is manifest in the three largest and most recent sculptures in the installation. “Secrets and Outtakes: Was It Me?” is a triptych of three puzzlelike pieces that would take as much time to decipher as reading 365 poems. It is dark and powerful, as is “Many People Died That Night,” which frankly exposes the horror of genocide. A large orange and black field of African-styled patterns, made of closely packed beads (actually map pins), surrounds a narrow text box. There is a list, in English — mother, father, sister, brother, uncle, cousin, friend, teacher, neighbor — between rows of Hebrew. (Hartman’s grandfather was a Jewish refugee who fled to Mexico.)

After the intensity and warmth of so much immersion in written histories, Krumm’s cold, quiet curtains, tubes and “clothes” offer a respite. In the Making is conceptual and technical, and Krumm’s process explores the boundaries of material. She pairs heavy, hand-forged metal with wispy, crocheted wire in endless-seeming combinations. Found objects, such as a rusty whipsaw blade or industrial weights, are worked in as hangers or anchors and bring their own character or question into each sculpture. Most, like the odd “strainer” that forms the crown of “Cavity/Strainer,” are unidentifiable. The pairings are neither clumsy nor awkward; the wire portions seem to grow organically from the more solid metal roots.

If this pairing of “feminine” handcraft with “masculine” forging seems obvious, the result is a set of very still, very beautiful objects. And the longer you look, the more the current in that duality changes direction. Krumm’s durable-seeming sculptures are delicate. No bed quilt would last as well as “10 Squared, 9 Patched,” which incorporates wire, but all of these creations could be bent and smashed into ruin. The metallic curtain titled “Draped (Screwed)” alludes to medieval chain mail in a way that makes the gallery feel, for a moment, like a deserted wing in an antiquities museum. Aside from the challenge of dusting it, though, it would make a covetable household object.

Krumm’s sculptures, she writes in a statement, “speak about the history of craft in their attention to detail and their thinking-through-making sensibilities.” If you have the patience to look carefully and at length, the repeated loops and emergent patterns in her art, as well as in Hartman’s, tell you plenty.