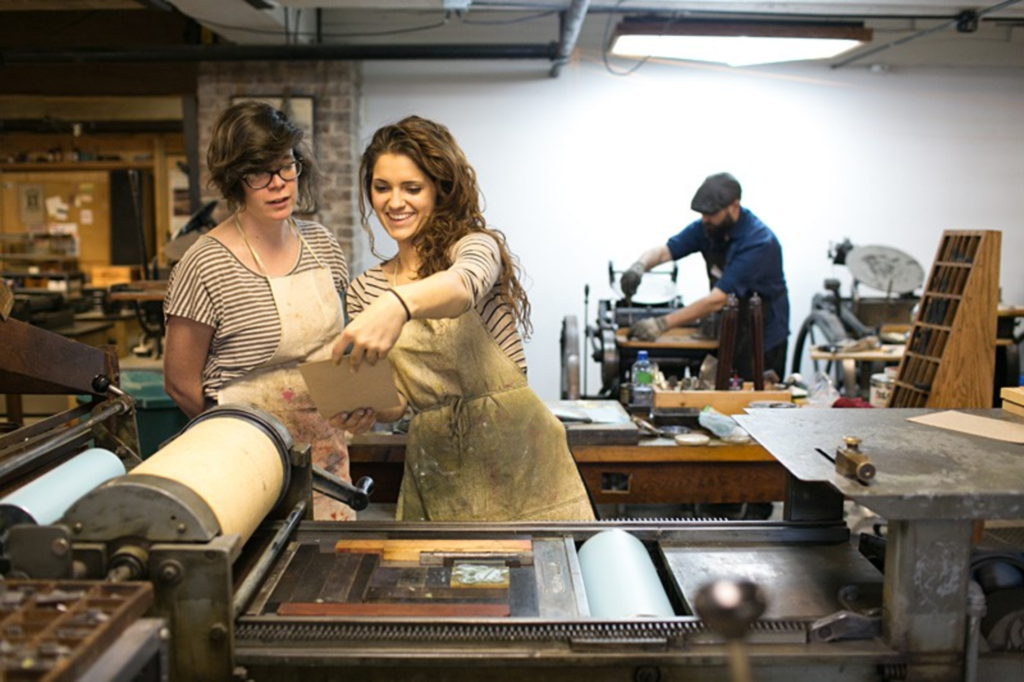 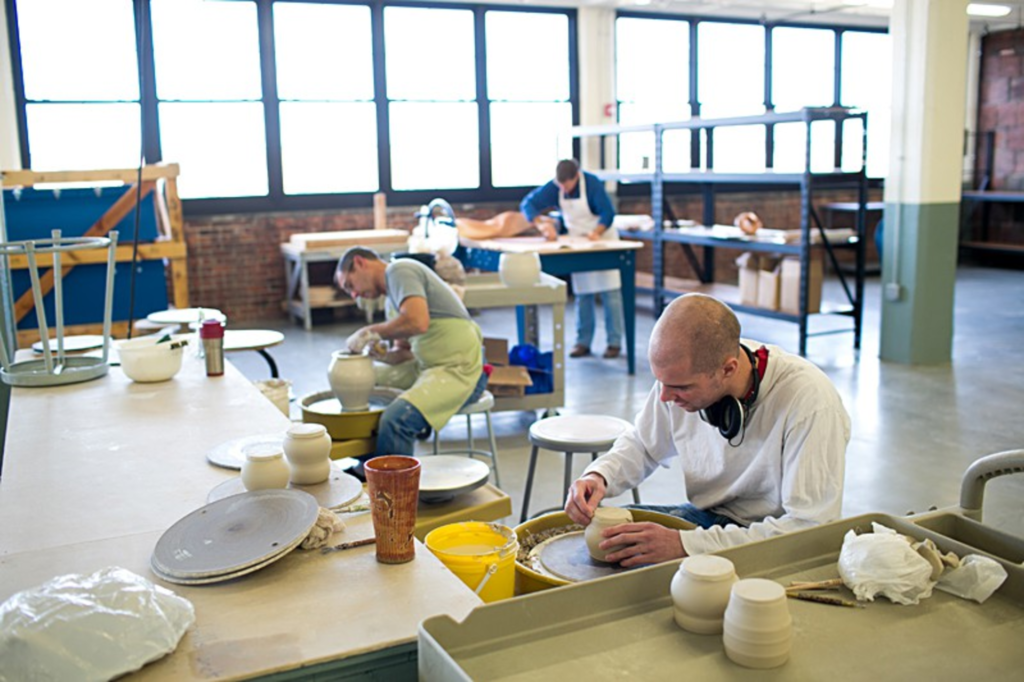 The tortured artist toils through the night, alone, hidden away in a shabby studio. At the same time, an autodidact labors in isolation to perfect her latest project, relying on how-to books and YouTube videos.

Do these romantic notions still have anything to do with how creative people work? At least in Kansas City, artistic types don’t have to live that way.

Those who have the urge to make something can now seek out their own kind, pooling their resources in community studios and sharing better facilities and equipment than any one practitioner typically can afford. Along the way, knowledge is handed down, experience is gained and friendships are formed. No matter your chosen material, there’s a group somewhere in the metro ready to help you get started, hone your skills or share your expertise.

Usage fees: Day passes (studio use without storage) are available for $35 a month. There’s a waiting list for shared and private studio space. Workshops and classes for adults and children are open to nonmembers for an additional cost.

Materials: Available for purchase next door at Crane Yard Clay.

With all the gleaming concrete and metal surfaces at Red Star Studios, you’d have no idea that the facility is dedicated to making objects out of mud. After a three-year renovation, the place opened in September, relocating from the Crossroads.

“The new space has energized people to come in at any hour we are open,” studio manager Tommy Frank says.

Frank has divided the open, light-filled area (windows overlook the downtown skyline) into a large shared studio with smaller cubicles for members and resident artists, including professional ceramists from across the country. Projects commonly include hand-building, wheel-throwing and slip-casting processes, and the studio often doubles as an informal classroom.

“The residents are very generous with their time and knowledge,” Frank says. “They lead the making environment.”

A combination break room and meeting space, as well as a glazing room and a kiln room complete the spacious facility. Those in need of inspiration can simply stop in at Red Star’s adjacent gallery space, which exhibits both emerging and legendary ceramists, such as Akio Takamori.

Usage fees: A $75 “Sawdust Maker” yearly membership gets you open-shop privileges. Classes are open to members at an additional charge.

Materials: Bring your own wood.

White, green and orange name tags cover one wall of the foyer inside the Kansas City Woodworkers’ Guild. This color-coding system is a visual testament to KCWG’s commitment to safety and education. White means that the member has yet to finish the safety-orientation class and pass a quiz. (“True or false? You must use both safety glasses and a face shield while using the bench grinder.”) Those with a green tag awaiting them are safety-certified. Shop foremen wear orange.

According to KCWG vice president Chuck Saunders, education is key.

“We’re here to promote the craft of woodworking and to get people past the ‘No, I can’t do that’ hump,” he says. “Woodworking is a skill. You can learn any skill.”

So you’ll also find a library here, as well as a classroom that doubles as a meeting area — and, of course, a wood shop, originally equipped by the guild to provide its members with a “try before you buy” experience and that now includes tools and machines not found in most home work spaces.

Apartment dwellers with little or no space for their own tools make up a growing membership segment. Common member projects include furniture, cabinetry and box work (think jewelry boxes and blanket chests). Many members are retirees, several of whom labored in the woodworking trade. “What other club would they belong to?” Saunders asks.

The shop is busiest on weekends — except during football season. “As long as the Chiefs are winning, we aren’t very busy on Sundays,” Saunders says.

Usage fees: Open-studio use costs $5 an hour or $15 for any amount of time over three hours. Workshops and classes for adults are available at an additional cost.

In June, quilt artist Kim Eichler-Messmer shared an idea over coffee with her friend Debbie Barrett-Jones. She wanted to open a community-based textile studio.

“There are a lot of people in Kansas City who like to dye yarn but can’t do it safely at home,” says Eichler-Messmer, a faculty member in the Kansas City Art Institute’s fiber department. “And because of my teaching schedule, I can’t use my studio all the time.”

Barrett-Jones immediately signed on to help. A mother of two, she was relieved to have a place other than her kitchen to conduct the cold-dye process, which she uses to create color gradations for her weavings.

The two artists opened the doors of a dye lab and a flexible work and exhibition space in August, having come across the Columbus Park building on Craigslist. They sold their own work in a preview exhibition to raise funds for small but essential purchases: paper-towel dispensers, a nonslip mat. Financial support has trickled in through other avenues, too. A photo of Barrett-Jones hugging the dye hood prompted an unexpected donation from a kindhearted supporter after the image was posted to the studio’s blog.

Eichler-Messmer hopes that the fledgling studio becomes a gathering place for the city’s textile artists. “It’s an individual activity,” she says. “You sit alone at your loom or sewing machine. We tend to stay in our homes, but I’m excited to get fiber artists out working communally.”

Materials: Science City provides materials for projects planned and led by staff. For individual projects, bring your own materials.

Science City’s Maker Studio grew out of the Maker Faire, a festival for (as its name suggests) people who make stuff. Union Station has been home to the fair for the past three years.

To start the Maker Studio, Science City’s staff removed the long-running Body Tours exhibit (a walk through the human vascular system) and replaced it with a shiny new ShopBot.

“We got that piece of machinery so we could build out the rest of the space,” explains Luis Rodriguez, process and programming specialist/Maker Studio lead.

So far, Rodriguez and his team have used the ShopBot to create materials for family-friendly technology demonstrations, including 3-D printing and wax casting. Plans for the finished space include separate lab areas for fiber (textiles and sewing), fabrication (traditional methods, such as welding), CNC, 3-D printing and scanning, digital design, and electronics.

Individual members with their own projects use the space, but the studio’s design accommodates school groups and teacher workshops as well. The focus is on learning by doing.

“This is totally hands-on interactive.” Rodriguez says. “There’s no hourlong lecture before you begin.”

Usage fees: A $45 annual membership buys studio access; the additional cost of press rental ranges from $5 to $10 an hour. Workshops and classes are available for additional fees.

Materials: Black ink and cleaning solvents are provided. Bring your own paper and colored ink.

For years, local printmakers without press access had trouble practicing their craft. Calligrapher Calvert Guthrie helped alleviate this problem when he moved his personal collection of printing presses into the Hobbs Building in 2006 and opened the Kansas City Center for the Ink & Paper Arts.

Over the past seven years, additional printmakers have brought their equipment here to share with the community. The 5,000-square-foot basement holds five paper cutters and more than 20 presses, and walking through the place is like touring a museum of printing history. Among the presses in various states of repair at KCCIPA is at least one that dates back to 1863.

“My eyes are a bit bigger than my stomach when it comes to equipment,” Guthrie admits.

The space also serves as a hub for printmakers and book artists, with member potlucks and classes and workshops covering calligraphy, letterpress and monoprinting. Members’ projects include posters, wedding invitations, stationery and fine-art prints. Processes supported include letterpress, lithography, intaglio and screen printing.

Guthrie or artist-in-residence Kendell Harbin (the KCCIPA offers a one-year residency to recent Kansas City Art Institute graduates) is usually on hand to offer advice and tips. “This is sort of a one-room schoolhouse,” Guthrie says. “I try to encourage an ethos of helping each other, beyond the classes.”

Usage fees: A single annual membership costs $60; a family membership is $98. Studio usage (separate from the membership fee) costs $4 an hour for members, with daily and monthly options available. Classes for children and adults are offered at an additional cost.

Materials: Clay and basic tools are available for purchase.

The KC Clay Guild’s popular Family Fun Nights attract the clay-curious. From 6 to 9 p.m. Fridays and Saturdays, nonmembers can try their hands at wheel throwing or hand building for $5.

“We get a lot of people who have always wanted to try working on the wheel,” says Elly Biggerstaff, the guild’s president. “It’s an on-their-bucket-list kind of a thing.”

Members hang out for free those evenings, which means that plenty of experienced artists are around to give tips and advice. “Everyone here is really helpful and willing to share ideas,” Biggerstaff says. “A big part of our mission is ceramics education.”

More than 300 members, at varying skill levels, use the guild’s facilities, which include a hand-building room, two wheel-throwing rooms, a glaze room and a kiln room. Things are cozy, but the organization is redoing its office, exhibition and storage-shelf areas to maximize studio space. And the close quarters, along with the friendly, all-volunteer staff, add to the sense of community. “Everyone watches out for each other,” Biggerstaff says.

With a quarter century behind it, the KCCG can claim a certain seniority among open studios — and it celebrates accordingly. For its twice yearly Raku Night fundraiser, the KCCG shuts down an entire block of Wyandotte Street and erects outdoor kilns to put on step-by-step raku demonstrations, showing how the Japanese firing process works. Guild members donate hundreds of pieces of their ceramics, to be fired and taken home by attendees.

Materials: According to founder Dave Dalton, Hammerspace has “what amounts to a convenience store for the weird stuff you need for what you’re making.”

Hammerspace is the name for the imaginary place where cartoon characters store absurdly large hammers or other weapons that they can pull out at a moment’s notice. It’s a particularly fitting thing to call a community workshop, where, as founder Dave Dalton puts it, “The idea is to provide just about any tool you’ll need for any task.”

It would take every last column inch of this article to list all those tools. But a list of recent classes demonstrates Hammerspace’s anything-goes diversity: silversmithing, airbrush painting, chain mail, 3-D printing, woodcarving.

Hammerspace is family-friendly, with a space dedicated specifically to kids, with blocks, video games and the Quantum Encabulator (a made-up machine with a console full of blinking lights that was a hit at the 2012 Maker Faire).

The snack counter, manned by a friendly robot named IRIS, is a throwback to those at roller-skating rinks and 1980s video arcades. Members gather around, reheating coffee (the oven and the fridge in the studio space are for nonedible substances), bouncing ideas off one another or sharing smartphone photos of projects.

“The people here are resources as much as the tools,” Dalton says.