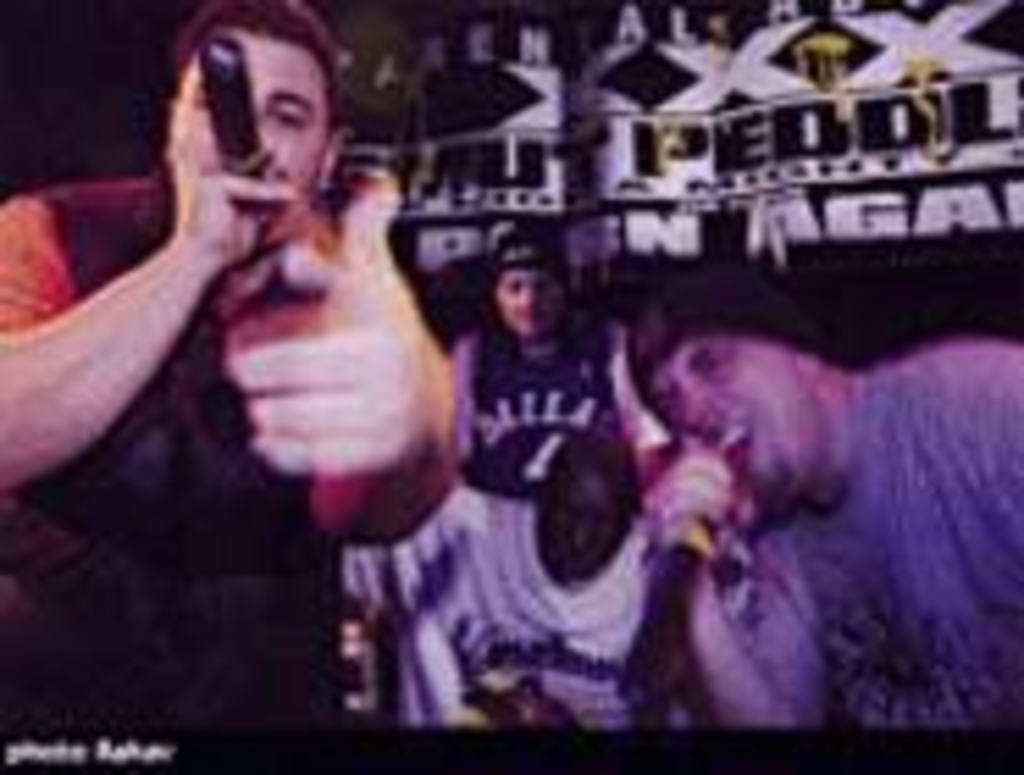 Once they’ve lured listeners with their freaky tales, Eon and his partner on the mic, Cage, deliver sharp criticisms of the industry. On “Amazing Feats,” Eon raps I’m stompin’ on these chatroom fakes/ whose hip-hop birth coincides with them cheesy remakes/You little kids playin’ the critics hard/Go back to your other hobby — Pokemon cards. The Smut Peddlers are actually calling out the bling-bling rappers whose album covers offer all of the garish raunch of Porn Again with none of the self-aware irony. Eon and Cage, along with DJ Mighty Mi, prove too clever to succumb to rap’s troubling strip-club mentality.

“We just try to do our own thing,” Eon says. “We have no obligation to use the formula that a lot of rappers use today. We just enjoy what we wanna do and make what we wanna make. We are just tryin’ to drop some real hip-hop type shit. We takin’ it back to the old school.”

Porn Again, the trio’s debut full-length, was several years in the making. “We linked up to do the single ‘One by One’ back in ’97,” Eon recalls. Eon and Mighty Mi broke into the biz as the rap duo The High & Mighty, whose single “B-Boy Document ’99” became an underground classic. Cage established his reputation with a series of twelve-inches, the best of which was “Agent Orange.” The trio met at the Nuyurican Cafe in New York, exchanged numbers and started recording tracks. The Peddlers now own their own label, Eastern Conference Records, and plan to release a Cage solo project as well as showcasing other up-and-coming artists, such as Mad Skillz and Copywrite.

That early introduction to adult entertainment may explain why audiences are exposed to blow-up dolls and dancing girls during the Smut Peddlers’ live sets, but Eon claims these dubious props merely add excitement. “You gotta have a little more than just us up on stage rhyming,” he insists. Maybe, maybe not, but such performances prove that the Smut Peddlers remain committed to truth in advertising.