Tom Jones fulfills and confounds expectations at the Uptown 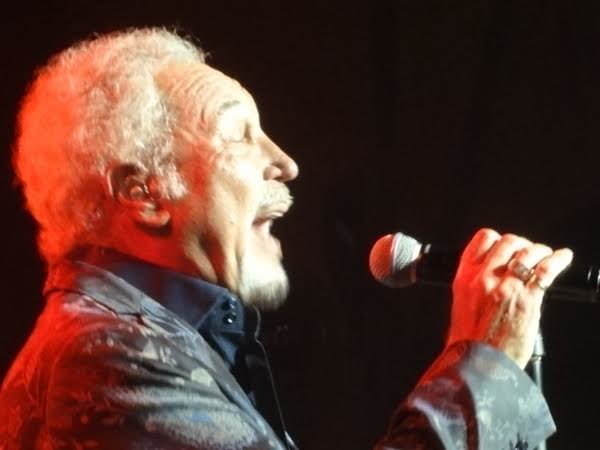 A show billed as “An Evening With Tom Jones” comes with hopes.

There will surely be 1960s hits — a lot of them. The concert will certainly be nostalgic. But the main (and slightly unreasonable) desire is that Tom Jones, even at 76, will still be … you know, Sir Tom Jones, that giant-voiced, sexy icon whose career has been reborn for every generation since 1960.

A capacity crowd at the Uptown, spanning a plurality of those generations, was never disappointed, but from the first song, John Lee Hooker’s “Burning Hell,” it was obvious that Jones would satisfy expectations his way. With his still-huge voice and a band that could follow wherever he chose to go, Jones made this an evening of Thomas Jones Woodward, that soulful gentleman from South Wales, sharing songs important to him, plus the ’60s hits, and the ’80s hit, delivered with enormous splashes of charisma.

Jones strolled out into a burning red spotlight to a blazing blues guitar line, looking impossibly trim in designer jeans, a patterned sports coat and blue suede shoes. His halo of snow-white hair and almost imperceptibly slower hips seemed to be the only real concessions to time. As he worked through songs such as Elvis’ “Run On,” the Cajun-inflected “Raise a Ruckus,” the rocking gospel of “Didn’t It Rain,” and a big-band version of “St. James Infirmary Blues” (and the rest of a two-hour show), his energy never flagged.

Jones played five songs from his latest release, Long Lost Suitcase, an album recorded to accompany his recently released autobiography, and the most touching tune was the slow-burning Lonnie Johnson ballad “Tomorrow Night.” “Every time I record an album, I take it home and play it for my late wife,” he explained, “and she loved this one.” 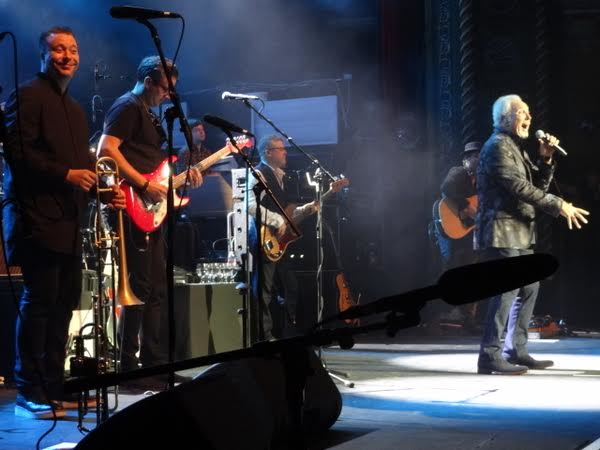 The central section of the show worked through issues of mortality unsurprising for a man who recently lost his wife of 57 years, and it’s a tribute to Jones that he kept the audience involved and on its feet while he sang pretty directly about death. With doubled white spotlights pouring onto him, in front of a video image of a blood-red backlit cross in the rain, Jones belted out Blind Willie Johnson’s brutal question: What is the soul of a man? From there, Jones moved into Gillian Welch’s touching but dark tribute “Elvis Presley Blues.” “I knew Elvis Presley very well, and he was a great man,” Jones almost sighed at the end of the song.

From there, Jones eased into Leonard Cohen’s “Tower of Song,” and even while he drew cheers with the line I was born with the gift of a golden voice, the video screen behind him moved through contemplative images of him in a tower, actually looking old. 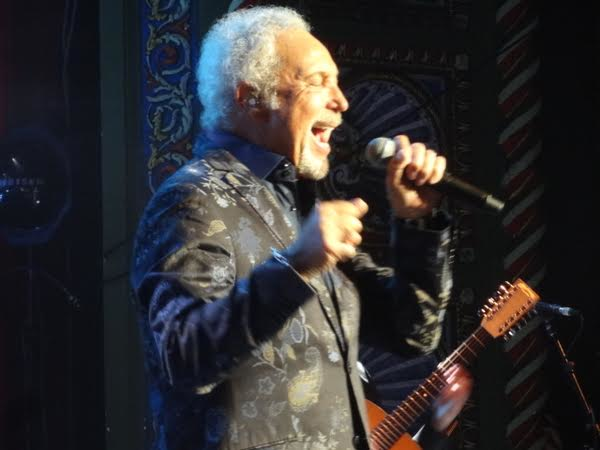 But the concert wasn’t all sadness, not by any stretch. His large band featured two guitars, two keyboards and a four-man horn section, and their arrangements took Jones’s music in wildly unexpected directions. The audience seemed truly and happily taken aback when a jazz-inflected acoustic-guitar-and-accordion interlude suddenly burst into a sousaphone-driven cabaret version of “What’s New, Pussycat?” (Realistically, the evening featured way more sousaphone and accordion than might be expected.)

Even “It’s Not Unusual” was spiced with a light, tropical arrangement that gave Jones even more room to move, and when he tore into “You Can Leave Your Hat On,” the crowd was up and dancing. He lingered just a little on the repeated line You give me reason to live, and a few emphatic eyebrow movements and a wink made it clear that he still has a lot of fun. 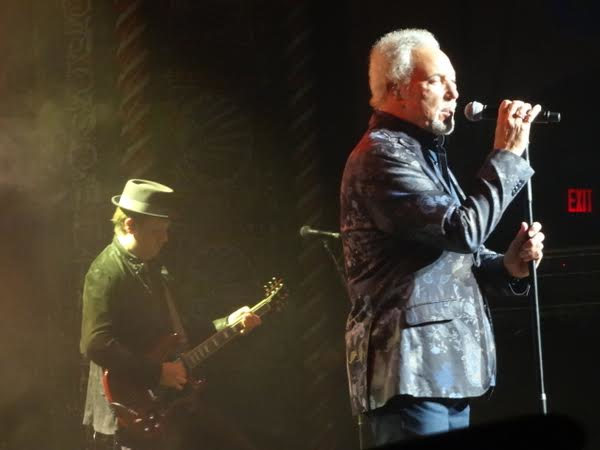 It’s telling that Jones’ version of Prince’s “Kiss,” while a highlight of the show (and the only time he really broke into a dance), wasn’t the last song. The last word came from Sister Rosetta Tharp’s “Strange Things Happening Every Day,” a World War II-era song that Jones described as a “rock and roll gospel song with a bit of boogie woogie,” and an obvious personal favorite. “We’ve had a ball,” Jones said, closing the show — an expectation he nailed, all the way around.

Leftovers:  It would be irresponsible not to report on whether thrown lingerie remains a thing at a Tom Jones show. It is, a little bit, especially during “What’s New, Pussycat?” and “It’s Not Unusual.”  Last night, however, the throwers seemed genuinely unprepared for the wispiness of the garments, or perhaps there were arm-strength issues; with the exception of a few sequined bras, most of the thrown garments fell short of their target, landing on people in the first few rows. Hats off to those who gamely undraped straps from ears and shoulders and chucked things the rest of the way onstage.

Mama Told Me Not to Come

You Can Leave Your Hat On

If I Only Knew

I Wish You Would